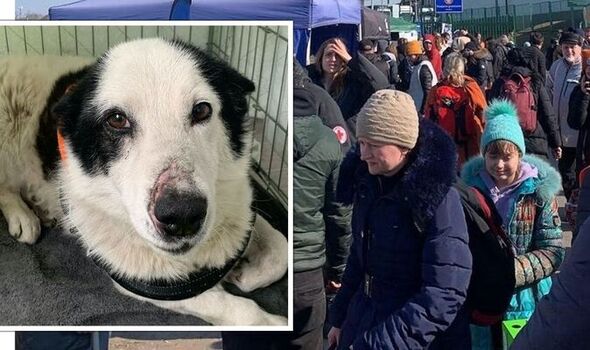 Dogs and cats that have been left without owners are being turned away back into the warzone over immigration restrictions and fears of potential health risks.

Kate Parker, wildlife crime campaign manager for Naturewatch Foundation who is working on the Polish border, told Express.co.uk: “Poland has veterinary inspections allocated by what would be our Defra, and they’re refusing animals coming in, in some circumstances.

Vets working on the border are only allowing refugees to bring five animals per person, with many left behind despite Poland having “shelters and lots of space and money” to quarantine the animals until they know they are safe from rabies risk.

Ms Parker, who has also helped with assisting refugees to get accommodation, added: “Animals should be allowed in and quarantined for 30 days but they’re just not letting them in. They are just refusing”.

She recalled an incident with refugees that had travelled all the way from the Southern coastal port of Odessa, which has been hit by heavy Russian shelling.

She said: “We were at one of the borders where there was a Polish vet and there was a girl with dogs that had travelled hours from Odessa. The vet believed they were being used for breeding, but they weren’t.

“She was told ‘there’s no war in Odessa’ and was sent back into Ukraine. They should have let her through and quarantined the dogs but it’s not something they will do”.

“These people had to get back into the van with dogs, that had been in there for two days, and go back over the border into Ukraine even though they had driven for days from Odessa. Many don’t have homes to go back to”.

She said situations like this are “happening multiple times a day”.

Bucha was badly targeted by Russian troops with images from the commuter town showing dead bodies with their hands tied behind their backs – seemingly shot at close range.

Kate said: “If you look at somewhere like Bucha that has been absolutely decimated. The bodies have piled up and their pets have nowhere to go because their owners have been murdered”.

She said: “People are trying to round them up but there is nowhere to put them once they’ve been rounded up because they’re not allowed into Poland, Slovakia or Hungary”.

As millions of people flee Ukraine as the war rages on, many pets and animals have been stranded in the search for safety and despite having the infrastructure in place to quarantine and test the animals for diseases, the Polish government are refusing entry to some.

Dominic Dyer, one of Britain’s leading wildlife protection and animal welfare campaigners, told Express.co.uk: “The war in Ukraine is a crisis for both humans and animals.

“Unlike any previous conflict in Europe, the Russian invasion of Ukraine is resulting in the largest movement of people and animals in history”.

However, speaking about the UK government, Mr Dyer said they “have moved significantly under public pressure to change the import and quarantine rules for dogs and cats coming in with refugees. We rarely see such rapid action from my experience”.

It comes after animal campaign groups urged the government to change strict immigration laws to allow fleeing Ukrainians to bring their pets into the country.

Dominic was able to come to an agreement with the Department for Environment Food & Rural Affairs (Defra) that will no longer place restrictions on companion animals entering the country with refugees. The government department will also cover the costs if the pets need to be vaccinated against rabies and placed in quarantine kennels, while the RSPCA are looking into providing additional kennel facilities if required.

A Defra spokesperson told Express.co.uk: “We do not want people fleeing Ukraine to be delayed on entering the UK because they are bringing their pets with them. We have put a streamlined process in place. We have introduced a new rapid rabies blood test and we are looking at further ways to increase capacity and further streamline the process.”