The Los Angeles Lakers, led by LeBron James’s triple-double, beat the Miami Heat 106-93 on Sunday to win a record-equalling 17th NBA championship – their first in a decade.

James added another chapter to his epic career, scoring 28 points, 14 rebounds and 10 assists as he captured his fourth NBA title with a third team as well as earning NBA Finals Most Valuable Player honours for the fourth time.

“It means a lot to represent this franchise,” James said. “I wanted to put this franchise back where it belongs. For me to be a part of such a historical franchise is an unbelievable feeling.”

James played his 260th play-off game – surpassing Derek Fisher for the most all-time.

Anthony Davis, playing in his first title series after years of frustration in New Orleans, added 19 points and 15 rebounds as the Lakers completed a 4-2 triumph in the best-of-seven championship series more than eight months after the death in a helicopter crash of team legend Kobe Bryant – who led the Lakers to their last title in 2010. 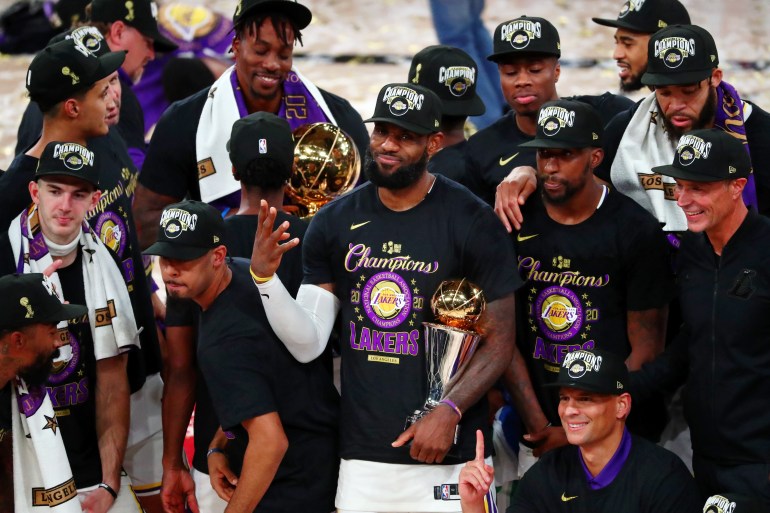 Lebron James has won four NBA titles and played in 260 play-off games [Reuters]The series in the NBA’s quarantine bubble in Orlando, Florida, capped not only an emotional season for the Lakers with the loss of talisman Bryant but a season of uncertainty and upheaval for the NBA as players grappled with the coronavirus pandemic and the demands for social and racial justice sweeping across the United States.

The winning team dedicated the triumph to the late Bryant who, together with his 13-year-old daughter Gianna and seven others, was killed in the January 26 crash in suburban Los Angeles.

“Kobe, I know he’s looking down on us super proud,” Lakers star forward Davis said. “We miss him, and this is definitely for him.”

Better than the heat days @DwyaneWade and @KingJames 🤫 https://t.co/mliNhJ39PF

Bryant’s widow, Vanessa Bryant, posted a congratulatory message on Instagram, saying: “Wish Kobe and Gigi were here to see this.”

Lakers general manager Rob Pelinka said: “Kobe’s voice is always in my head, always, every day, every minute… for us to be able to win this championship doesn’t take away the sting of the loss, but what it does is it helps us add to their legacy.

“Kobe and Gianna’s legacy will last forever. It will impact lives around the world in positive ways, and this Lakers championship in 2020 is partly to build on that legacy and honor them. The moment couldn’t be any more special to do that for them.”

Davis recounted how Bryant would encourage everyone at games in the months before the tragedy.

Outside the Lakers’ home arena, the Staples Center in Los Angeles, fans took to the streets chanting, “Kobe, Kobe,” despite being urged to celebrate at home due to the COVID-19 pandemic.

“This was for Kobe regardless of what jersey we had on,” said the Lakers’ Markieff Morris. “We knew we had to do this for Kobe and Gigi and the rest of the Laker Nation. This was a special one.”

Tags: for, Kobe’: Lebron James leads
You may also like
Recent News: