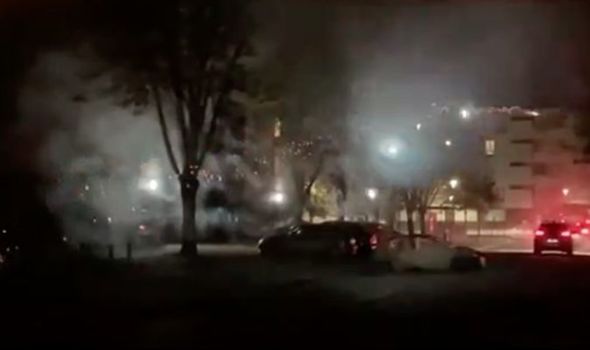 Violence broke out late on Tuesday evening with flames erupting from cars and vans in several places in the district – Jean-de-la-Varende, rue Victor-Hugo, rue Guillaume-le-Conquérant and place de la Paix, at the foot of the Pascal tower or rue Paul-Claudel.

Smoke and the smell of burnt metal smothered the neighbourhood, with local residents terrified of the horrific acts taking place around them.

In the early hours of this morning, young people from the city, many wearing hoods, broke car windows and threw molotov cocktails inside.

More than a dozen of the hooded mob criss-crossed the city on foot and by car, with some 50 other youngsters attending the chaotic scene,

Several other residents in the neighbourhood looked on terrified from their windows as the explosions of burning cars continued.

A distraught woman burst into tears as her family car exploded into flames.

She cried: “If I had known that stuff was planned tonight, I would have moved it.”

The local fire service are mobilised to intervene shortly after midnight but were unable to take much action until the police arrived.

They came onto the scene at around 1am, but immediately came under attack from the mob, but they are immediately rhe target of mortar fire.

Sacha Martinez, a journalist at Ouest-France in Alençon, posted a video to Twitter showing fireworks being hurled towards the police and fire crews as vehicles burn.

He wrote: “That night the Perseigne district experienced an outbreak of violence.

“About fifteen cars were set on fire and the police were targeted by fireworks mortars after a local youth was arrested for trafficking in the morning.”