Frank Soo was an English professional football player and manager who played during wartime matches. He was the first non-white player to represent England through the 1930’s and began his career at inside-left before moving to half-back. But who exactly was he and why is he featured as today’s Google Doodle?

Frank Soo was born in Buxton, Derbyshire on March 8, 1914 meaning Friday would have been his 106th birthday.

Mr Soo was raised in Liverpool by his father, a Chinese sailor, and an English mother.

The couple had moved to the village of Fairfield to open a laundrette, as was commonly done by Chinese emigrants in England at the time, before eventually moving premises to West Derby in Liverpool around 1920.

The footballer had six siblings, one of whom died during the war.

Mr Soo married hairdressing salon proprietor Beryl Freda Lunt in June 1938 after she had introduced herself to ask for his autograph.

The couple later separated in 1951 and Freda died a year later as a result of a barbiturate overdose. 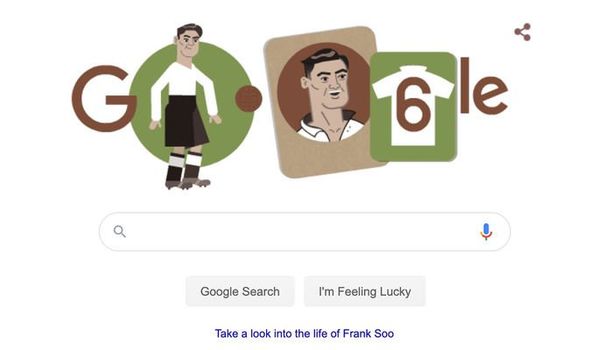 During his younger years, he was scouted by both Everton and Liverpool without ever being signed by either club.

Instead, he began his senior career with Cheshire League side Prescot Cables in late 1932 while working as an office clerk.

He was then signed by Stoke City for a £400 fee in January 1933, making him the first player of Chinese descent to play in the Football League.

Tags: headlines, lifestyle, nation, Spo
You may also like
Recent News:
This website uses cookies to improve your user experience and to provide you with advertisements that are relevant to your interests. By continuing to browse the site you are agreeing to our use of cookies.Ok