A vote is taking place that will determine who succeeds German Chancellor Angela Merkel after her 16 years in power.

The process has some similarities to the UK parliament, but in many ways is also very different.

What’s likely is that it won’t be immediately clear who will be Ms Merkel’s replacement when the exit poll comes in after voting finishes at 6pm local (5pm UK) time.

This is how the process works: How is a government elected?

Every voter gets two votes: One for a directly elected MP, like the UK/Westminster system, and a second for a party of their choice.

The directly elected MPs – elected on a first past the post basis – represent 299 constituencies, but they are only part of a larger parliament.

A further 299 seats – but possibly more – go to parties, depending on the share of voters’ second votes.

But there’s a catch.

If a party fails to get at least 5% of the second votes, they will not be allocated any seats in the share (unless they win at least three constituency seats). Confusingly, the total number of seats the parties are able to win can end up being more than 598.

The way the final number of seats for each party is worked out is by ignoring all the parties that scored less than 5% of the party share vote, then working out the actual share achieved by the remaining parties and then adjusting the total number of seats until it reflects this figure. This will only ever be adjusted up, not down, which is why the party share allocation usually rises above 299.

In the 2013 election for example, Merkel’s party scored 34% of the party share vote, but after those that won less than 5% were removed, that 34% was actually just over 40% of the remaining votes. Because of that, seats were added to make sure in total her party had 40% of the seats. Across the whole parliament, there ended up being 631 seats. 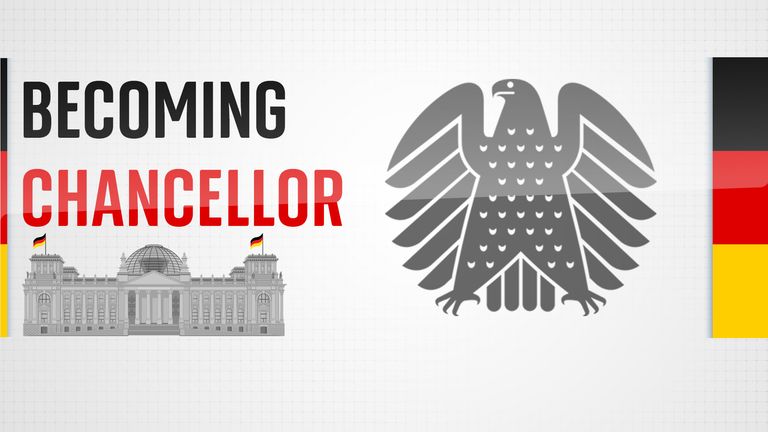 Before the election began, each of the leading parties chose someone who they hoped would be chancellor – the equivalent of the UK’s prime minister – if the party is able to form a government.

But, since the Second World War, no party has ever won enough seats to form a government on their own.

Consequently, they have to form a coalition. Usually, that process is led by the person the party has chosen to be the future potential chancellor. 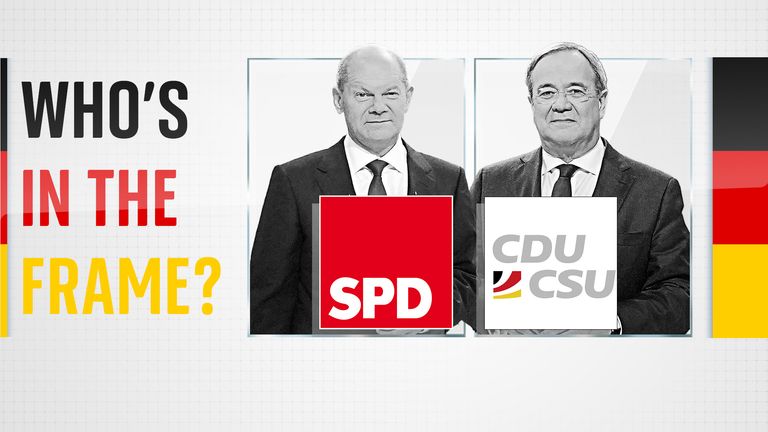 Who is most likely to get the top job?

The German, or West German, government has been led by one of two parties since shortly after the end of the Second World War.

The Christian Democratic Union party (CDU) party is a centre-right, liberal-conservative group, that is roughly similar to the Conservatives in the UK. It has been the leading group in the German parliament for the last 16 years, supported by its sister party, the Christian Social Union (CSU), which runs in Bavaria instead of the CDU. Although the party describes itself as Christian, the CDU at least is broadly secular. The CSU less so. Ms Merkel is from the CDU.

Past chancellors have included: Helmut Kohl.

In the 2021 election, the candidate for chancellor is Armin Laschet.

The Social Democratic Party (SPD) is a centre-left group, similar to UK’s Labour. It has led the government or been a minor partner on numerous occasions since WW2.

In 2021, the candidate for chancellor is Olaf Scholz.

Who else could be involved? 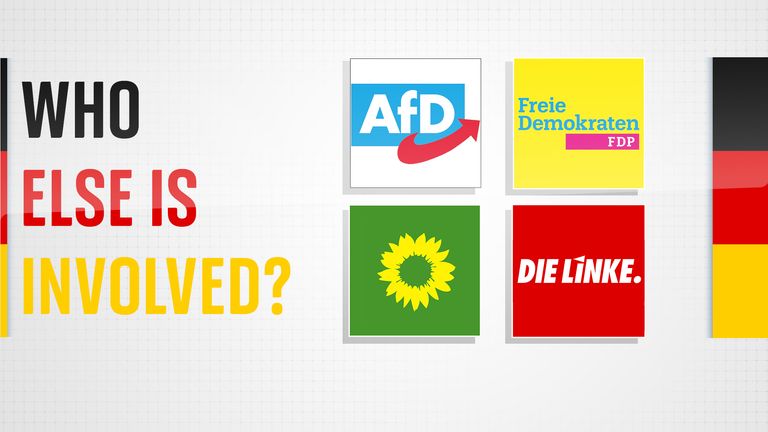 At one stage, the Greens were leading the national polls, but have since slipped back to third. They have a similar outlook to the UK’s Green Party.

They have previously been in a coalition government of Gerhard Schroder in the late 1990s/early noughties.

The Greens’ candidate for chancellor is Annalena Baerbock.

The Free Democrats (FDP), despite being behind the Greens in the polls, have a long history of being in coalition with both the CDU and the SPD. They are a pro-business party, espousing economic liberalism and the promotion of free markets and privatisation.

The FDP’s candidate for chancellor is Christian Lindner.

The far-left Left Party is a democratic socialist party and has origins that are descended directly from the Marxist-Leninist ruling party of the old East Germany. Since the unification of Germany in 1990, it has not been part of a coalition.

The Left Party has two candidates for chancellor: Janine Wissler and Dietmar Bartsch

The other party that is polling above 5% is the far-right Alternative for Germany (AfD). Formed in 2013 to counter the bailout of Greece following the eurozone crisis, it has more recently galvanised its support around opposition to Germany’s welcoming of Syrian refugees during the 2015 migration crisis. It entered parliament in 2017 but is unlikely to be part of a coalition as none of the other parties say they will work with it.

In total, there are 47 parties running in the election but usually, only the top five or six end up winning any seats. What happens when the results are in?

Usually, because no party ever wins outright, the candidate for the party with the most seats tries to form a coalition to build a majority.

This can be easier said than done and depends on how many seats that candidate has.

In 2017, although Ms Merkel won nearly 33% of the seats – some 13 points more than the next nearest contender – it took her six months to build a coalition that put her back in power. Talks on one possible formation collapsed within weeks.

Once a detailed agreement has been reached, it is voted on and ratified by the individual parties.

Then, Germany’s president officially puts forward a candidate for chancellor, and parliament then votes on whether it gives its approval, with a simple majority required.

Because it can take weeks or months to form the coalition, the old chancellor stays in place in a caretaker capacity until a new one is elected, so Ms Merkel won’t leave the role immediately and may well be around for some time to come. 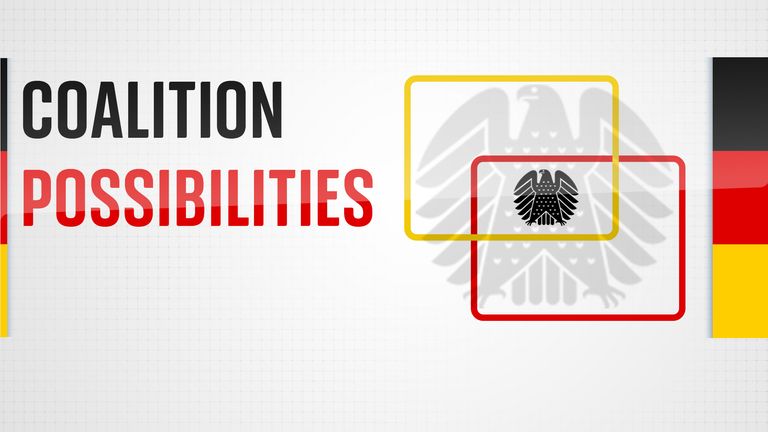 What are the possible coalitions?

Grand coalitions, which involve a partnership between the two main parties, have occurred three times since unification, twice under Ms Merkel.

The current frontrunner, Olaf Scholz, is a minister in the grand coalition and will be fully familiar with how it could work. It is an example of how German politics can be completely different to that in the UK, as, at the moment, a coalition between the Conservatives and Labour is almost unthinkable. Currently, the polls indicate a coalition of the SPD and CDU/CSU would not have enough seats so it would need a third partner.

If the CDU and SPD do need a third partner, two possible coalitions have been labelled Kenya: the black of the CDU, the red of the SPD and the green of the Greens, and Germany: black (CDU), red (SPD) and yellow (FDP).

If Mr Scholz’s SPD wins the most seats, it has been suggested he may try to form a coalition with the Greens and the Left, which has been called the Red-red-green.

The CDU has outlined this scenario in a bid to win over voters who may be worried about the prospect of what would the most left-wing, and potentially radical, government for years. Currently, the parties do not have enough support in the polls for this to happen.

If the Greens do particularly well, the CDU poorly but the SPD is still the biggest party, Mr Scholz may be able to form a grouping without the need for The Left, which would result in a largely environmentally driven government. This happened between 1998 and 2005 when the combined seat total of the two parties was enough to put the CDU into opposition.

Assuming the SPD wins the most seats and the Greens also do well, but not well enough to allow the two parties to form a government, Mr Scholz – who is on the right of his party – may try to form a pact with the Free Democrats. This has no precedent and may be tricky considering the pro-business stance of the FDP puts them at odds with many Greens, but it has been proposed in the past. This is currently mathematically possible, according to the polls.

If the CDU/CSU enjoy a late run, they may win enough seats to have a go at forming a government of their own, most likely in coalition with the FDP. Angela Merkel presided over a grouping of this type between 2009 and 2013.

Another less likely coalition that has been mooted is black (CDU), green (Greens) and yellow (FDP). Who votes and when will the result be known?

Only German citizens aged 18 or over are entitled to vote and to be elected. There are about 60.4 million eligible voters in the nation of 83 million, with 2.8 million of them able to vote for the first time.

Polls open at 8am local time (7am UK time) on Sunday and close at 6pm local (5pm UK) on the same day. Voting by post has been possible in the preceding several weeks. All the votes are expected to be counted by Monday morning.

Noises about what the various party candidates will try to do to form coalitions will start to emerge soon afterwards.

Tags: ELECTION, Explained:, GERMAN, How
You may also like
Recent News: