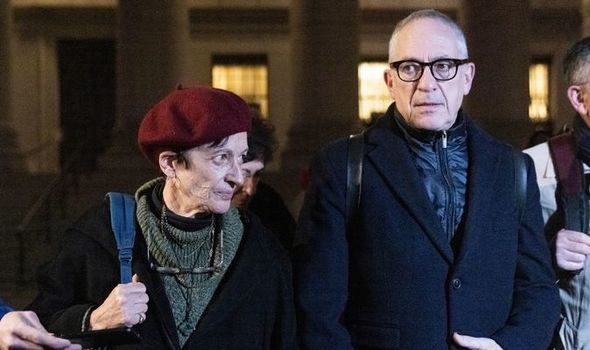 Socialite Maxwell, 60, faces up to 65 years in jail after she was convicted of grooming, recruiting and sexually abusing girls as young as 14.

But just minutes after the jury gave their verdict, her family announced they had begun lodging an appeal.

Sister Isabel, 71, and brother Kevin, 62, attended court every day to support her, older brother Ian, has repeatedly criticised the prosecution.

A family friend said: “Blood is thicker than water, and that means the Maxwells stick together through thick and thin.

Appeal lawyer “Ghislaine’s brothers and sisters regard her as their beloved little sister, and family loyalty has always run deep.”

If the appeal is rejected then legal sources believe Maxwell may “start naming names” of high-profile paedophiles caught up in her former lover Jeffrey Epstein’s sordid web.

In their statement posted on Twitter, the Maxwell siblings said: “We believe firmly in our sister’s innocence – we are very disappointed with the verdict. We have already started the appeal and we believe that she will ultimately be vindicated.”

Lawyer Lisa Bloom, who represents a number of Maxwell and Epstein’s victims, responded that she does not see “any chance” of Maxwell’s legal team successfully appealing the verdict.

Ms Bloom said: “The judge’s rulings were all very correct and followed the law and that would have to be the basis of an appeal.”

lawyer admitted felt some “compassion for Maxwell’s family”, but added: “The trial showed she was no scapegoat – she wasn’t on trial for just hanging around with Jeffrey Epstein, was on trial for own actions.”

The law she fel “com Max bu tr wswfo ar Jef she w her ow doubt The j doubt? Bloom jury was told Maxwell imposed a “culture of silence” at Epstein’s properties, where staff were told to “see nothing, hear nothing and say nothing”.

Maxwell, meanwhile, lived a “life of luxury” – with the prosecution describing her trafficking for the billionaire financier as a “means to support her lifestyle”.

Her defence counsel had tried to distance her from Epstein, but a series of photographs confirmed their close relationship.