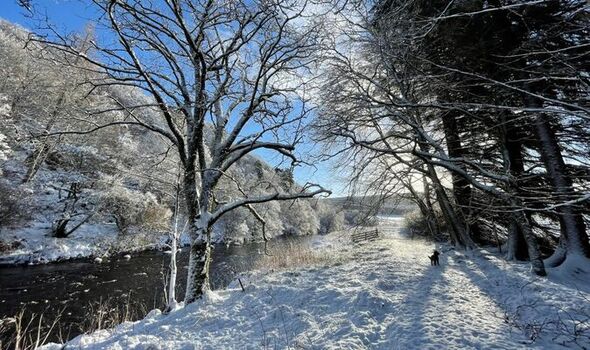 Snow, sleet, hail, rain and lightning yesterday hit even at low-lying areas. There were reports also of “thundersnow”, where a blizzard falls in a thunderstorm.

Up to two inches of snow were set to fall on higher Pennine routes while much of Scotland and Northern Ireland were already blanketed.

In Glasgow, a teenage girl was injured in a car crash as blizzards struck and elsewhere there were road closures and rail delays. Air and ferry services were also disrupted.

Winds reached up to 60mph in some areas, and was even stronger on exposed coasts.

A Stagecoach bus got stuck in Perth after heavy overnight snow across Perthshire.

And the A684 between Hawes and Bainbridge in North Yorks was also treacherous.

The Met Office issued yellow weather warnings across much of Scotland and Ireland and down to Manchester. But snow was due to fall as far south as Devon. The warnings, including for icy conditions, were in place until this morning.

Meanwhile, a severe warning – meaning danger to life – was in force for Bewdley, Worcs, because of the swollen River Severn. A similar warning for Ironbridge, Shrops, was lifted.

The Met Office said more rain was due but not “huge amounts”. Later today a ridge of high pressure will make it feel “much more pleasant” said forecaster Aiden McGivern.