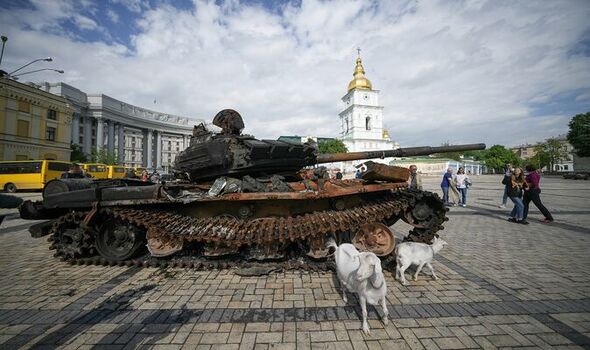 The occupying troops were setting up a tripwire when the farm animal triggered a chain-reaction explosion of several grenades, said Ukraine’s chief intelligence directorate.

“As a result of the goat’s ‘chaotic’ movements, the animal ‘disposed of’ several grenades. [Russians] sustained injuries of varying degrees of severity.”

The goat’s fate remained unknown yesterday but the runaway animal is being called the Goat of Kyiv on Ukrainian social media.

The reference commemorates the legend of a mythical pilot known as the Ghost of Kyiv who was credited with shooting down numerous Russian planes during the Kremlin’s failed onslaught on Ukraine’s capital.

After seizing the defenders’ cities of Kherson and Mariupol,Vladimir Putin’s invading forces have ramped up attacks on Zaporizhzhia.At least 60 per cent of the region around the south-east Ukraine city has fallen to Russia.

Putin’s troops have attacked the area since invading Ukraine on February 24. Control of the region would allow his military to advance on central areas of the war-torn country.

It is not the first time an animal has made headlines for helping the Ukrainian resistance.

A Jack Russell terrier was honoured last month for sniffing out more than 200 explosive devices since the start of the conflict.

Two-year-old Patron – Bullet in English – is working in the Chernihiv region, north of Kyiv, to help its military handlers detect mines and other live ordnance.

Patron has cleared the way for Ukrainians to return to their homes without the risk of further injury or death. It is thought that hundreds of such devices have been left behind by retreating Russian forces.

Breeds of dogs such as Jack Russells have a strong sense of smell, making them more effective than many human de-mining efforts.