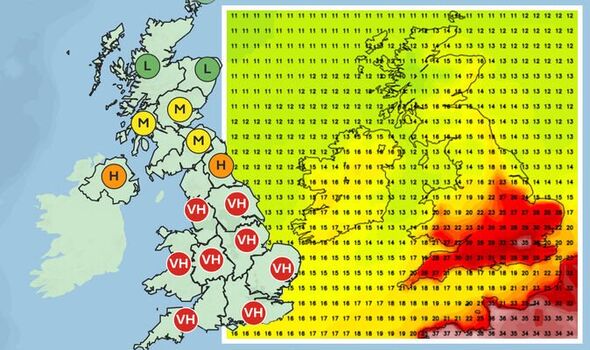 A so-called ‘Ola de Calor’ heatwave currently roasting the Continent in temperatures pushing 40C will sweep the UK through the coming days.

High pressure will build from mid-week, stretching from mainland Europe allowing a ‘desert plume’ from Iberia to surge into Britain.

Thermometers will rise through the week with Friday expected to bring the peak of the scorcher.

Met Office meteorologist Alex Deakin said: “This will be the first hot spell of weather for the year for some parts of the country with temperatures rising across the country as high pressure dominates.”

“As this high starts to amble its way to the east, we tap into a plume of even hotter air from the south and that will see temperatures peaking across the country on Friday.”

“By the end of the weekend, most of the UK will be in the cooler air, but for this week there will be strong sunshine, high UV levels and high pollen levels.”

“The heat will build and peak probably on Friday.”

Temperatures could hit 35C in southern parts of the country by the end of the week, although it will be cooler across Scotland and the north.

Searing temperatures will push UV levels to between ‘moderate’ and ‘high’ widely across the UK.

Elsewhere they will hover between medium and high, and low across Scotland, according to Met Office forecasts.

Temperatures will hit 28C in parts of southern England on Thursday while further north highs struggle to get much above 14C or 15C.

By Friday, the full heft of the heatwave driven by a plume of hot air from Iberia will have Britain in its fiery grip.

Mr Deakin said: “The peak of the temperatures is likely to be on Friday with high pressure to the east allowing us to tap into a plume of air coming in from Iberia.”

“Temperatures may peak in the southeast at 32C, and 33C is possible, most likely in the north London area up towards Cambridge.”

“There will be a contrast between the southeast and the northwest where temperatures will be in the mid-teens.”

“For many places, Friday will be the warmest day of the year so far.”

Europe is currently baking in an unprecedented heatwave which has pushed temperatures towards 40C.

Volatile air sweeping into Britain could trigger a thundery eruption as the heatwave climaxes.

Jim Dale, meteorologist for British Weather Services, said: “What we are going to see is desert heat coming up from Africa, into France and Spain.”

“Temperatures could reach 35C in parts of London and the southeast by the end of the week, and these are the sorts of temperatures which will put records under threat.”

“This is going to be the first major heatwave of the year.”

John Hammond, meteorologist for Weathertrending, said: “There’s an emerging signal that, for a time, a ridge of high pressure will edge across southern and central areas, allowing a longer drier, warmer spell later in the week.”

“However, it looks unlikely that this will build into a more prolonged hot and sunny spell.”

“Further north, closer to the jet stream and Atlantic weather fronts, cloud and occasional rain look like being more prevalent, with western coasts and hills most exposed to these.”

With pollen levels expected to rocket through the coming days, experts have warned allergy sufferers to take extra care, especially during thunderstorms.

Max Wiseberg, airborne allergens expert and creator of HayMax allergy barrier balm, said: “Storms cause great movements in the air, both bringing pollen grains down which might have otherwise risen above head height out of harm’s way, and whipping up pollen grains and fungal spores near the ground.”

“To make matters worse, farmers will often work hard to get their fields harvested before a storm which further increases the level of allergens in the air.”