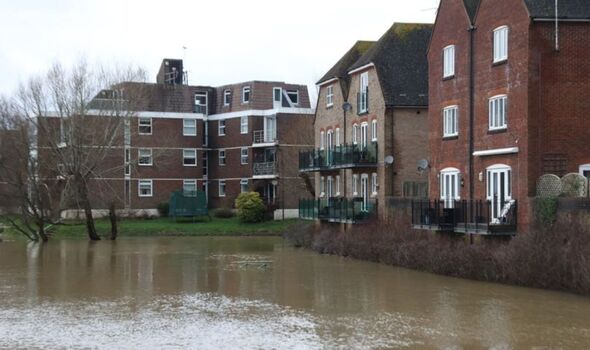 Sussex has been hit by torrential rain in recent days, resulting in large-scale flooding with water levels closing in on homes.

The inclement weather followed the Met Office’s warning for snow and heavy rain in the county.

It has had widespread effects around the county as areas attempt to cope with the rising water levels, reports Sussex Live.

Pulborough, West Sussex, which has been flooded several times in recent months, is one of the areas affected.

Fields and farmland throughout the village are covered in a thick layer of murky water after the River Arun overflowed.

However, more residential parts of the village are also submerged, with water appearing to creep ever closer to properties.

Parts of Hastings town centre, including the Priory Meadow Shopping Center, were almost completely submerged, with the mall closing as a result.

As a result of the wet weather, seven flood warnings were put in place across Sussex.

The areas affected include Bersted on the Aldingbourne Rife, Westhampnett on the River Lavant, Fittleworth on the Western Rother, Pulborough on the River Arun, Alfriston, Hellingly, Horsebridge, and Crowhurst.

Those in the affected areas were urged to take action to protect their homes and businesses from floodwater.

The rain made for difficult driving conditions across the county.

In Polegeate, large pumping trucks were called out to deal with surface water that had formed on roads throughout the town.

The wet weather is likely to continue this week across parts of the UK with northern areas forecast snow and ice until Wednesday, January 18.