The weekend will see temperatures climb back up to a record-breaking 40C in parts of the UK, with Monday and Tuesday expected to be the hottest days so far. While most of the UK will be “exceptionally hot” early in the week, the official Met Office red heat warning only applies to parts of England. So what should you expect in your area on Monday? Express.co.uk reveals your local heatwave forecast for Monday, July 18th.

A red extreme heat warning has been issued by the Met Office, covering parts of central, northern, eastern, and southeast England on July 18 and 19.

Chief Meteorologist Paul Gundersen, said: “Exceptional, perhaps record-breaking temperatures are likely early next week, quite widely across the red warning area on Monday, and focussed a little more east and north on Tuesday.

It’s not just the southern parts of the UK that will feel the heat blast either, with eastern areas of Scotland also tipped to see temperatures in the high twenties – well above their average for the time of year. 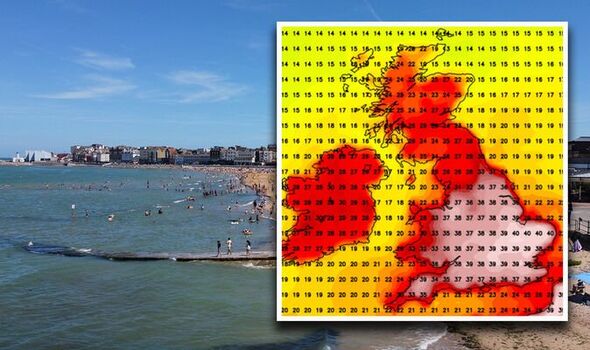 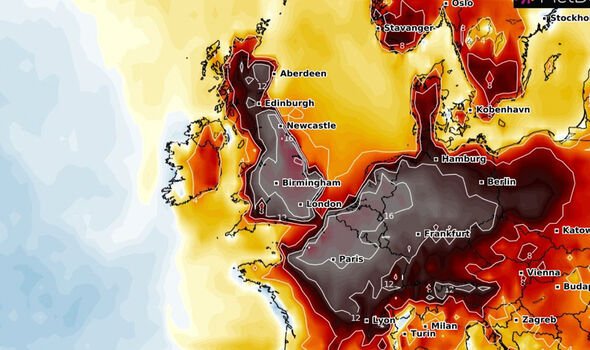 Where will see the hottest temperatures?

The British capital bears the brunt of the heat on Monday with temperatures exceeding 35C.

According to the Met Office official forecast, London will bask in 24C heat through the night and into the early hours of Monday morning, with highs of 29C expected by 10am.

Figures at 40C are predicted in Cambridge and Peterborough, according to WXCharts.

Between 1pm and 7pm, the scorching heat will continue to rise, though it is expected to drop back to 29C by around 10pm.

Coastal regions will see similar temperatures of between 30-35 with full sun all day.

A red “extreme heat” warning is in place for London and Oxford, while an amber warning applies to most of the South East. 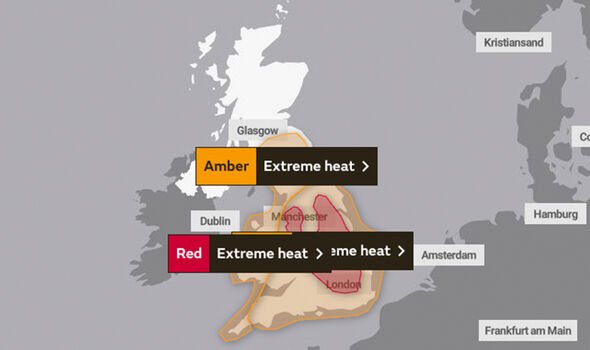 How hot will it be in the Northern regions?

Unsurprisingly, Scotland and more Northern parts of the UK will see lower temperatures peaking in the mid-twenties throughout the day.

Highs of between 24C and 29C are expected in these areas, though full sunshine will remain for the majority of the day.

In central parts of the UK, the temperature is expected to peak to round 35C in the middle of the day (between 12pm and 3pm). 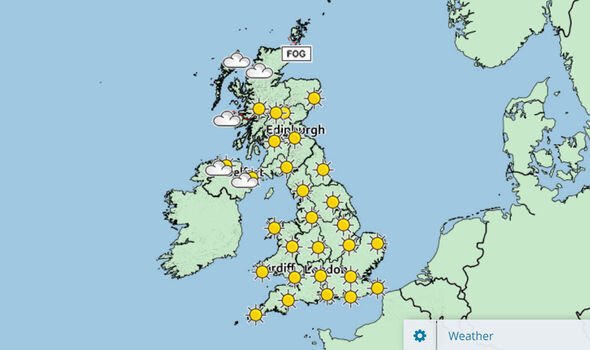 What time of day will be the hottest?

On Monday, the hottest temperatures are predicted to peak between 3pm and 6pm.

While slightly lower than those forecast for Tuesday, a large position of the UK will experience the peak of the extreme heat on Monday.

At 6pm, almost all of England and Wales will see temperatures between 33C to 39C.

Elsewhere, temperatures of between 20C to 25C, are expected in Scotland, with Northern Ireland predicted to bask in 26C heat around 6pm.

The North West of England will see highs of 27C at this time.

The scorching will continue throughout the night too, with just a minor drop predicted after sunset.

This is likely to lead to widespread impacts on people and infrastructure. Therefore, it is important people plan for the heat and consider changing their routines.

“This level of heat can have adverse health effects.”

While temperatures will be noticeably hotter on Monday than those seen this weekend, the peak of the heatwave is expected to hit on Tuesday.