Neighbours in the northern part of the city cried out to each other for help, frightened by the unearthly sounds of crumbling buildings and shattering concrete.

“My parents were asleep and I was watching a movie when I heard the sound of a huge crash,” 16-year-old Sevil Aliyeva told Al Jazeera. “The walls, large pieces of stone fell on me.

“There was no sound from my mother. My father began to call me. Then his voice stopped too.”

Sevil and her brother, eight-year-old Huseyn, are now orphaned – their parents Anar and Nurchin were in their thirties.

Before being buried, the couple’s friends and relatives prayed over their bodies. Their simple coffins were covered in the Azeri flag and a few roses. 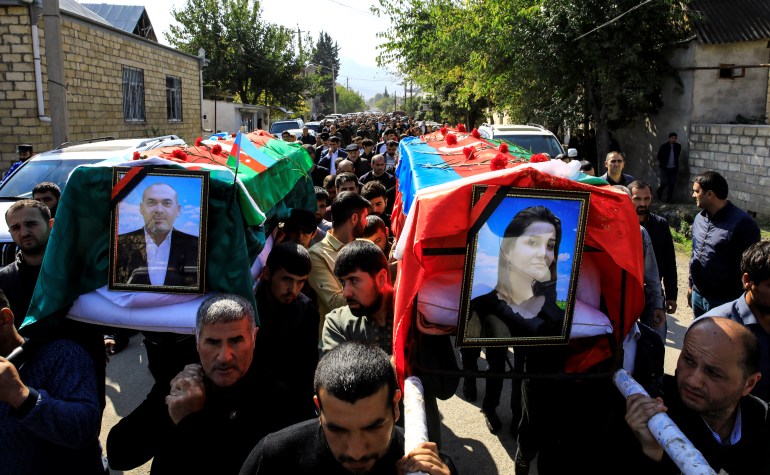 People carry the coffins of Anar Aliyev and his wife Nurchin Aliyeva, killed in Ganja attack during the fighting over the breakaway region of Nagorno-Karabakh, in the city of Shamkir, Azerbaijan October 12, 2020 [Umit Bektas/Reuters]Mourning residents with sorrowful eyes told this reporter three members of the same family, the Alasgarovs, were also killed.

They died in an instant when the shell of a missile hit the roof of their building. Ulvi, Tarana and Durra were 30, 55 and 57 respectively. 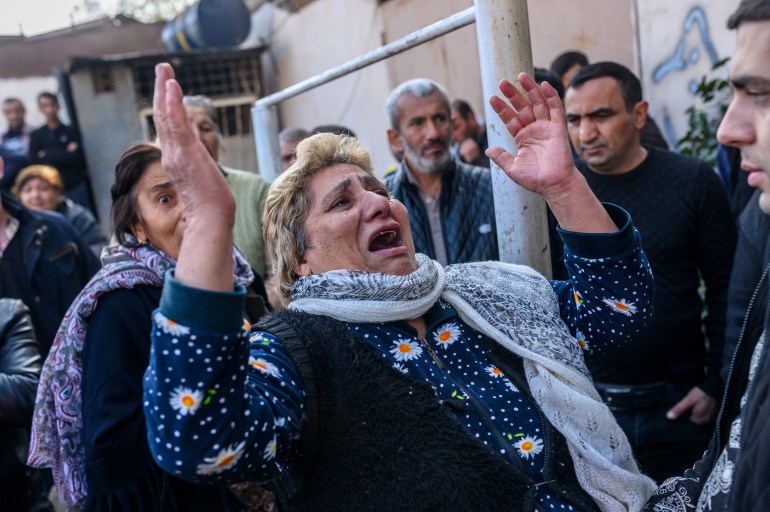 Women react as rescuers search for victims or survivors at the blast site hit by a rocket during the fighting between Armenia and Azerbaijan over the breakaway region of Nagorno-Karabakh, in the city of Ganja, Azerbaijan, on October 11, 2020 [Bulent Kilic/AFP]Home to half a million people, Ganja is about 97 kilometres (60 miles) from the front lines of the Nagorno-Karabakh conflict and 241km (150 miles) from the Armenian border.

The city, the industrial centre of western Azerbaijan, is steeped in history. The 12th-century Persian poet Nizami Ganjavi was born here and the Nizami Mausoleum is located at the entrance to the city from the southwest side.

The attack on Sunday came hours after the warring countries made their first diplomatic contact since fighting over the breakaway Nagorno-Karabakh region began on September 27.

The Azerbaijani and Armenian foreign ministers had met in Moscow, and after 11 hours of talks, agreed to a humanitarian ceasefire which should have taken effect on Saturday. Minutes into the truce, however, both countries claimed the other side was attempting to attack.

On Sunday afternoon, as doctors attended to the wounded, among them a three-year-old girl named Maryam with an injury to her head, a poster with the nine names of those who were confirmed killed in the blast was brought to the wreckage.

But a few hours later, the death toll rose to 10.

Gunay Aliyeva, who was pregnant, had initially survived the blast but was badly wounded. She later died at hospital. She was 28.

Her husband, Adil, and mother-in-law, Afag, were also killed, and are survived by their two-year-old daughter, Nilay. Like Sevil and Huseyn, she has been orphaned by the conflict.

At least 40 people were also wounded.

Mushfig Jafarov, a member of Parliament for the Ganja region, told Al Jazeera Armenia is violating internationally-recognised provisions of the Geneva Conventions.

“The Armenian government is trying to start a total war by firing rockets at Azerbaijani cities. Azerbaijan has no intention to open fire on another country’s territory,” he said.

Hikmet Hajiyev, the foreign policy aide to the Azerbaijani president, said Armenia is violating the requirements of the humanitarian ceasefire and has fired heavy artillery and rockets not only at Ganja, but also at Mingachevir, which has a population of 100,000 people and is home to a hydroelectric power station, and other civilian areas.

“This should be assessed as Armenia’s disrespect to the world community, including the Russian Federation. This act of vandalism and genocide was committed by Armenia against the Azerbaijani people, despite the idea of a ceasefire on humanitarian grounds with the direct mediation of the Russian Federation. The international community must give due consideration to these events,” he told reporters. 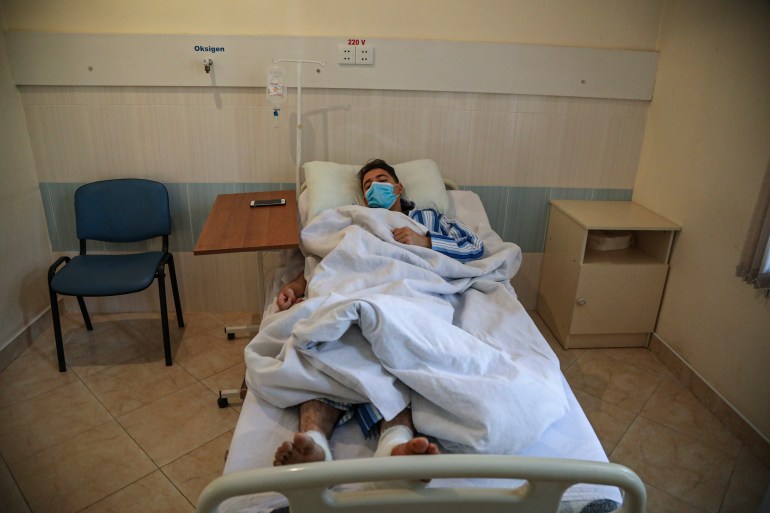 An Azerbaijani man lays in a hospital bed after recent shelling in Ganja, Azerbaijan, October 11, 2020 [Aziz Karimov/EPA-EFE]Hajiyev has claimed the victims of the October 11 attack in Ganja were provided with temporary housing, and a new building would be constructed for those who lost their homes.

On Wednesday at 1am local time, almost exactly three days after the attack in Ganja, Armenian forces planned a similar assault but were prevented, according to Azerbaijan’s ministry of defence.

Armenia regularly denies claims by Baku regarding attacks, saying they are fabricated as a way of justifying any kind of retaliatory moves.

Avaz Hasanov, conflict expert and chairman of the Baku Humanitarian Research Public Union, believes Armenia shelled Ganja because it has lost regions along the front line.

“The purpose is to create panic among the Azerbaijani population. By launching the missile from its territory, the Armenian side hoped that the Azerbaijani side would respond similarly. This would give Armenia an opportunity to appeal to Russia as a member of the Collective Security Treaty Organization (CSTO). Yet, Baku did not fall for the provocation.”

But beyond the headlines and officialese, all that was made clearer from Sunday’s assault was that there are lives at stake.

More than 10 apartment buildings were damaged.

After the attack, residents returned to the scene. Ruins replaced the building they had lived in, just a few days ago.

One young woman looked at the rubble and said in a voice that everyone could hear: “I used to be proud that the apartment with the largest hall in our building belonged to me, but look at it now.”

Some picked through the debris and tried to recover their belongings – mattresses, blankets, books, photos and children’s toys.

Few were willing to speak to reporters.

“There is no need to talk, you see everything,” another woman said. “This was built for many years as a result of hard work and suffering, and in the end, the Armenians drop a bomb and destroy everything in one second.” 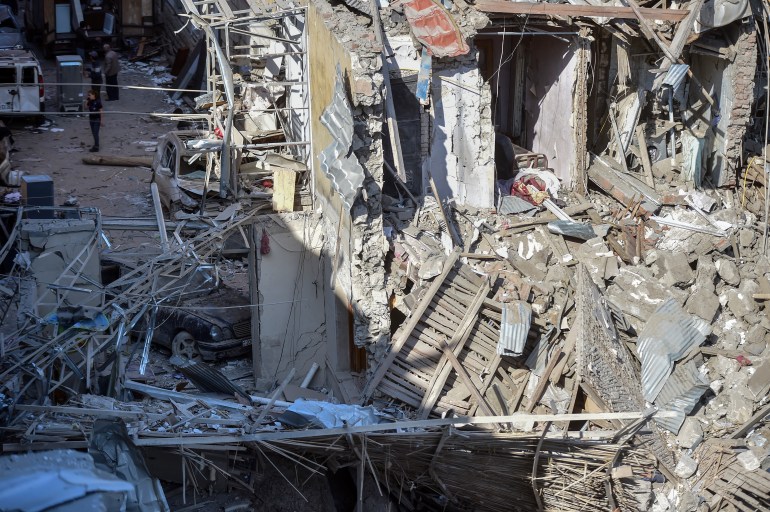 Tags: after truce agreed, chil, hours
You may also like
Recent News: