The books America cooked from during 2020 will stand as cultural artifacts of the year when a virus forced an entire nation into the kitchen.

The pandemic has been good to cookbooks. Overall sales jumped 17 percent from 2019, according to figures from NPD BookScan, which tracks about 85 percent of book sales in America.

Some of the smash hits were predictable. The world domination of Joanna Gaines, the queen of shiplap, continued. The second volume of her hugely popular “Magnolia Table” cookbook franchise sailed to the top of the New York Times list of the best-selling cookbooks in 2020. Ina Garten, the cooking doyenne from the Hamptons, landed the second spot with “Modern Comfort Food,” followed by “The Happy in a Hurry Cookbook,” by the “Fox & Friends” host Steve Doocy and his wife, Kathy.

But the stir-crazy year upended the way people cook and think about food in fundamental ways. Understanding more about how home cooking changed and getting a glimpse into which effects might linger requires a deeper dive into the 21.5 million print cookbooks sold in 2020. 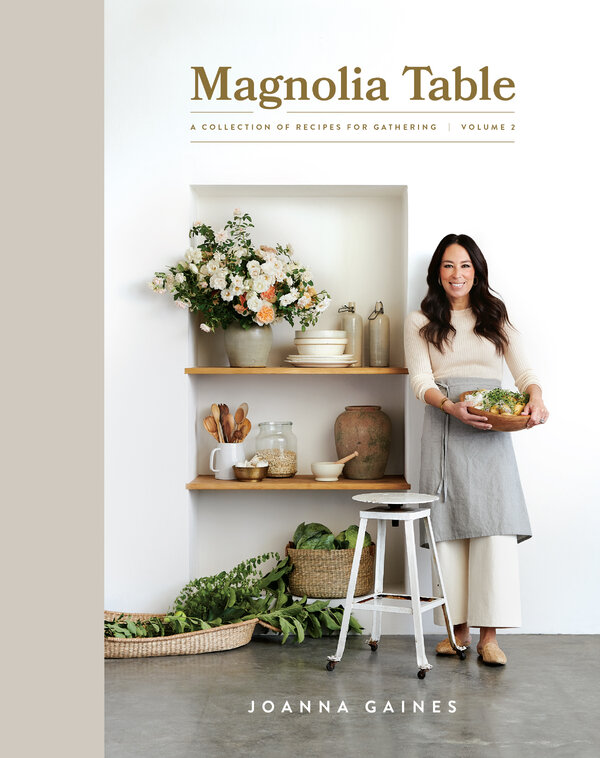 “There’s not one story about how we learned to cook or learned to love or hate cooking during the pandemic,” said Francis Lam, the radio host and vice president and editor in chief of Clarkson Potter, a major cookbook publisher, who said he cooked more in 2020 that he had in his entire life. “People just became more of their cooking selves.”

One of the year’s 10 best-selling cookbooks on a list complied by BookScan offered 600 air-fryer recipes, owing as much to the appliance’s ability to crisp up takeout French fries as it does to its popularity with the Trader Joe’s set, who made it through the year by heating up vegetarian egg rolls and mac-and-cheese bites. It sold more than 135,000 copies.

By contrast, 30,000 copies may not sound like much, but the sales figures were big for “Cool Beans” by Joe Yonan, a treatise whose own editor predicted “would never set the world on fire.”

Everyday cooks went in search of new cuisines and projects to break up the routine. Practiced cooks who might have spent a Saturday afternoon before the pandemic hand-rolling pasta sought recipes that would help keep weeknight cooking from becoming a grind.

Plenty of people simply needed help getting any meal on the table, which drove the popularity of general cookbooks. That category was the largest of cookbooks bought in 2020, according to BookScan. Sales showed a 127 percent increase over 2019.

Some of the most popular guides were written by authors with big personalities and multiple platforms, like Samin Nosrat, the California chef and contributor to The New York Times. Her book, “Salt Fat Acid Heat,” which became a Netflix show, was the fifth-best-selling cookbook on the Times list. “Half Baked Harvest Super Simple” by Tieghan Gerard, the Colorado food blogger whose Instagram account has nearly three million followers, hit No. 7 on the BookScan list.

The news wasn’t as good for cookbooks by restaurant chefs, perhaps a surprise in a year suffused with nostalgia for eating out. Rica Allannic, a literary agent with the David Black Agency, whose roster includes a murderer’s row of culinary heavy hitters, said the category “is not ascendant.”

Sarah Smith, another David Black agent, explained, “Prepandemic, there was already a move toward cooking that was more accessible and meant to be made at your house, as opposed to extremely composed, cheffy books.”

There were other bright spots, though. Concerns about climate change and a Covid-driven focus on personal health helped books on vegan and plant-based cooking, a category that had been growing, but slowly. “Vegetable Kingdom: The Abundant World of Vegan Recipes,” the fourth book from Bay Area chef Bryant Terry, quickly sold nearly 30,000 copies, with another 55,000 in print — a testament to the publisher’s belief in the book.

The year might best be remembered as the moment when project cooking became a national pastime. So much bread was baked that it set off a run on flour. Sales of canning and preserving books jumped 137 percent over 2019. Home cooks perfected their dumpling-folding technique. Families even made projects out of writing cookbooks together about their pandemic efforts.

Books, project cooking and equipment sales formed a kind of symbiotic relationship. The hours spent at home provided a lot of time to smoke meat, for example. “So many people bought pellet grills,” said Joe Derochowski, a home industry adviser at the NPD Group, which owns BookScan.

And if you bought a grill, you’d likely want a cookbook to help you use it. That helps explain why “Franklin Barbecue: A Meat-Smoking Manifesto,” by Aaron Franklin and Jordan McKay, was a breakout hit, even though it had been published five years earlier. The book has sold more than 360,000 copies, with a total of 500,000 in print.

“Let’s hear it for backlist royalties,” said Lorena Jones, the editor in chief of Ten Speed Press, which published the book.

Another backlist darling was “Flour Water Salt Yeast: The Fundamentals of Artisan Bread and Pizza” by the Portland, Ore., baker Ken Forkish, published by Ten Speed in 2012. It became the top-selling baking book on Amazon, and now has 600,000 copies in print.

Cookbooks offered other escapes, too. “People used cooking, or their cookbooks, as a way of seeing the world and learning about the world,” Ms. Jones said.

That gave a lift to titles like “In Bibi’s Kitchen: The Recipes and Stories of Grandmothers From the Eight African Countries That Touch the Indian Ocean” and “The Blue Zones Kitchen,” the longevity researcher Dan Buettner’s mash-up of National Geographic photography and recipes from around the globe, which landed in sixth place on the New York Times cookbook list.

Americans wanted their culinary journeys delivered with strong points of view, like by Toni Tipton-Martin’s in “Jubilee: Recipes From Two Centuries of African-American Cooking.”

“That book is not the kind of book that is built to be a conventional commercial best seller,” said Mr. Lam, the Clarkson Potter editor. “It is a highly thoughtful, deeply researched book based in historic texts. But for some people, it opened up a world they didn’t realize was there, and for other people it was an opportunity to see more of a world that they knew was there all along.” It has sold nearly 50,000 copies and has had nine printings.

And if yours wasn’t a household that relied on takeout, somebody had to make dinner. A lot. Cookbooks made the grind a little less mind-numbing.

“So many people were asking me about books that offered easy weeknight dinners, but in ways that introduced new flavors or ideas,” said Paula Forbes, an Austin, Texas, writer who produces a weekly cookbook newsletter called Stained Page News.

“People want big flavors,” said Christopher Kimball, founder of the cooking enterprise Milk Street. “That is going to only increase.”

“Cookish: Throw It Together,” Milk Street’s latest cookbook, hit all the right notes for pandemic cooks. It uses techniques from around the globe, ingredients that don’t necessarily require a trip to the grocery and recipes that take less than an hour to make, like charred broccoli with miso vinaigrette, and West African peanut chicken. The book outsold anything else Milk Street has published since it began in 2016.

Milk Street got lucky. Like most cookbooks, “Cookish” was written months earlier. Cookbook publishing is not an industry known for its nimble reaction to cultural shifts, and even in normal times, trying to predict what cooks might want in the future is a challenge. Reacting to a medical, economic and social crisis is even harder.

“That’s like asking a country-western singer if opera is going to be big next year, and are they going to change their style,” Mr. Kimball said.

Still, the pandemic will have an impact on cookbooks, both what gets sold and how they are written.

When the lockdowns hit, work dried up for Marcela Valladolid, the California chef and media personality. She turned to teaching $30 Mexican cooking classes with her sister on Zoom. They proved so popular she had to cap each audience at 1,000.

Prepping the script for the classes, writing recipes to send to students in advance and answering hundreds of their questions taught her to loosen her approach to writing recipes. She dropped a plant-based cookbook she was planning to write, and shifted to one based on the classes.

“It became impeccably clear what my audience was looking for from me,” she said.

Those kinds of food-based microcommunities, which were nurtured during the pandemic, will become more important in the cookbook industry, said Kristen McLean, the books industry analyst for the NPD Group.

Cooks whose social media presence or newsletter subscriber base grew during the shutdown are likely to add cookbooks to their portfolios, and may opt for newer, faster publishing channels that turn out a book in six months instead of two years.

“The 360-degree media play is very, very powerful,” Ms. McLean said. “The influencer economy is one of the most interesting things I’m watching.”

Some traditional cookbook publishers say the market for cookbooks is likely to stay strong because the cooking habit is now ingrained in more people. “If cooking was something you dreaded before Covid and now it’s something you actually look forward to? That’s a real game changer,” Mr. Kimball said.

Editors are banking on a few Covid-era trends. The baking habit is likely to stick, whether it’s sourdough, snacking cakes or something more elaborate. Ms. Allannic, the agent, recently sold a book on bread making with children that is organized by age. “A few years ago, I wouldn’t have touched that with a 10-foot pole,” she said.

Mr. Lam is considering a seafood title, even though seafood books have traditionally been a tough sell because most Americans usually eat their fish at restaurants. That shifted last year, when retail seafood sales jumped.

If 2020 was the year of self-preservation, 2021 will be the year of socialization. Editors predict a flood of picnics and dinner parties, which could see a run on cookbooks organized around celebrating and gathering. “A thing people were forced to realize this year is that special occasion cooking can happen at home,” said Ms. Forbes, the editor of Stained Page News.

There is one topic that agents and editors predict cooks won’t be talking about: the pandemic itself.

Mr. Lam has a friend in television production who told him that the industry is operating on the premise that when the pandemic is over, no one will want to watch anything that reminds them of it. He wonders if that will play out in cookbooks, too.

“Will I want to think about what I learned during the pandemic?” he asked. “Probably not. I definitely don’t want to cook how I did in 2020.”

The top 10 cookbooks for 2020 on the New York Times best-seller list.

3. “The Happy in a Hurry Cookbook: 100-Plus Fast and Easy New Recipes That Taste Like Home,” by Steve and Kathy Doocy. (William Morrow)

4. “Magnolia Table: A Collection of Recipes for Gathering,” by Joanna Gaines. (William Morrow )

10. “Just Feed Me: Simply Delicious Recipes from My Heart to Your Plate,” by Jessie James Decker. (Dey Street)

Tags: Cooking, Shelter-in-Place (Life
You may also like
Recent News: