Climate change is creating a growing class of displaced Americans, and the federal government is struggling to decide how to help them.

Betty Swope at her home in Lake Charles, La. She moved back in before damage from Hurricane Laura was fully repaired because her time in rent-free emergency shelter had run out.Credit…

Flavelle and Fountain visited Louisiana to tell the story of a dire policy failure through the eyes of the people who lived it.

LAKE CHARLES, La. — Two summers ago, Hurricane Laura wrecked Betty Swope’s modest bungalow at the edge of Lake Charles, a city surrounded by oil refineries in southwest Louisiana. The Federal Emergency Management Agency helped at first, paying for Ms. Swope and her son Adrian to stay in hotels, then putting a trailer in their yard and providing about $7,000 toward fixing their house.

But that covered a fraction of what repairs would cost Ms. Swope, who is 74 and, like many storm survivors, lacked insurance. And though Congress approved extra funds for victims of Hurricane Laura, that money has yet to reach Louisiana almost two years after the disaster.

While Ms. Swope sought money to rebuild, her son, paralyzed decades earlier in a diving accident, increasingly struggled. Adrian’s room was too small to maneuver into his wheelchair, so he was confined to his bed. Over time, both his spirit and his body deteriorated.

In November, 15 months after Hurricane Laura pushed him out of his home, Adrian died. He was 47. The coroner’s report cited complications from paraplegia, but Ms. Swope blamed his isolated life in the trailer. “If we were able to get one room fixed in the house,” she said, “he would have been here still today.”

As the United States struggles to protect its citizens against the worsening effects of climate change, returning survivors to their homes after hurricanes, wildfires and other disasters has emerged as a particular failure. Money, it turns out, is not the problem. Instead, agencies are hamstrung by rules that often make little sense, even to the officials in charge.

The result is a growing class of displaced Americans, a version of domestic climate refugees, scattered across motel rooms and trailer parks, an expanding archipelago of loss. 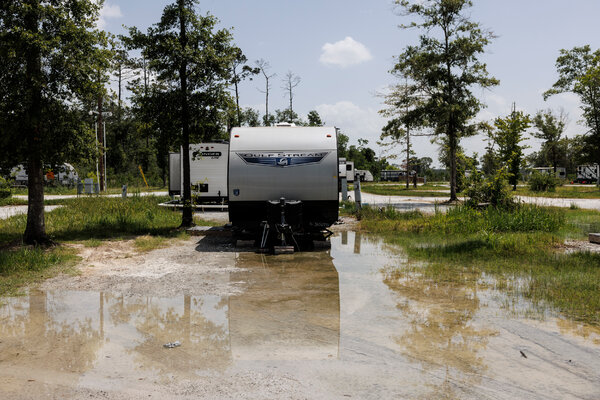 After a disaster, the two agencies chiefly responsible for helping victims are FEMA, which focuses on emergency shelter and limited home repairs, and the Department of Housing and Urban Development, which funds long-term rebuilding. But those programs were designed in an earlier time before climate change made disasters more frequent and severe, and they are impeded now by a lack of planning and coordination.

That breakdown is reshaping many American communities: Without affordable options for permanent housing, many survivors just leave, hollowing out cities and towns.

After back-to-back disasters in Louisiana, thousands of people are still living in government housing — most or all of which are trailers — far more than there were at similar stages in other comparable disasters.