Firefighters put out blaze at Spasokukotsky Hospital, designated as one of the facilities to treat COVID-19 patients. 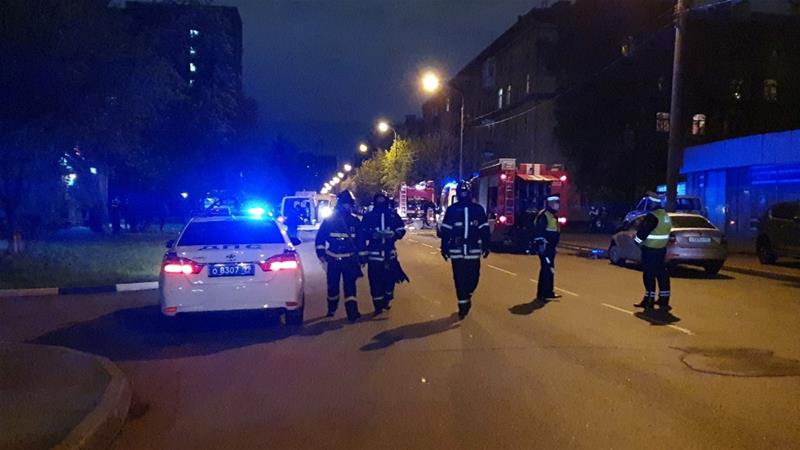 At least one person has died after a fire broke at a hospital treating coronavirus patients in Moscow, according to officials.

The emergencies services said in a statement on Saturday that more than 200 people were evacuated from Spasokukotsky Hospital in the northern suburbs of the Russian capital.

“The fire started in one of the rooms on the first floor,” it said, adding that it was quickly extinguished.

Sergei Sobyanin, the mayor of Moscow, confirmed reports that a patient had died and said those evacuated would be transferred to other hospitals.

“The causes of this incident will be thoroughly investigated,” Sobyanin wrote on Twitter.

To date, Russia has registered almost 210,000 confirmed infections and more than 1,900 related deaths.

More than half of the country’s cases and deaths have been recorded in Moscow, a sprawling city of 12.7 million.

The capital and several other regions have been on lockdown since late March to try and stem the spread of the coronavirus.

This week, Russia overtook France and Germany to become the country with the fifth-highest number of confirmed coronavirus cases in the world. The top four hardest-hit countries include: The United States, Spain, Italy and the United Kingdom.

Tags: Coronavirus pa, EUROPE, RUSSIA
You may also like
Recent News:
This website uses cookies to improve your user experience and to provide you with advertisements that are relevant to your interests. By continuing to browse the site you are agreeing to our use of cookies.Ok