Israel’s top court will meet on Sunday to consider whether to block the coalition deal between Netanyahu and Gantz. 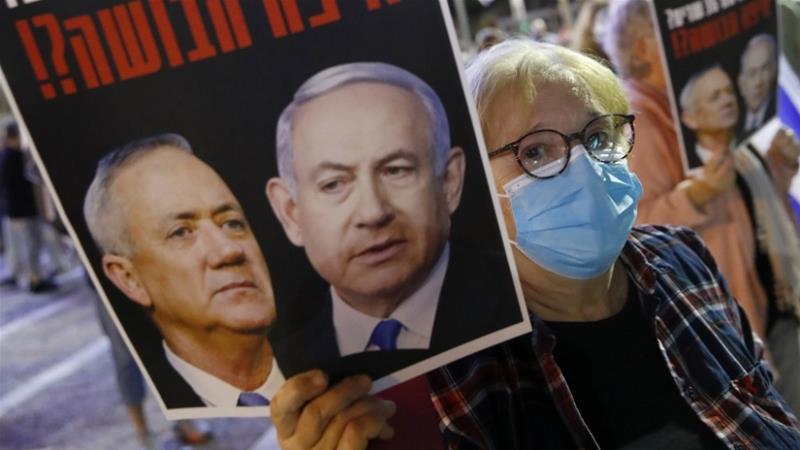 Hundreds of Israelis took to the streets in Tel Aviv on Saturday night, demonstrating against Prime Minister Benjamin Netanyahu’s new coalition deal with his chief rival a day before the country’s Supreme Court is to begin debating a series of legal challenges to the agreement.

Demonstrators gathered for the third consecutive weekend in Tel Aviv’s Rabin Square, standing more than six feet apart in organised rows to conform with social-distancing rules to protect against the spread of the coronavirus.

“Shame! Shame!” chanted the protesters. One of the posters showed a picture of Netanyahu and Benny Gantz with the slogan, “We Say No to a Corruption Government”. 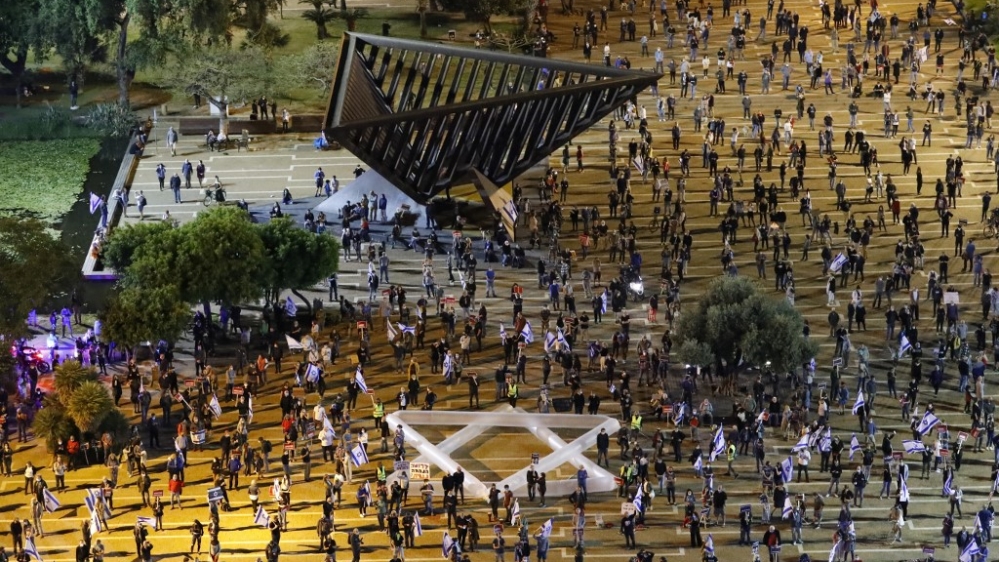 Protesters are upset that Netanyahu’s power-sharing deal with Gantz leaves the prime minister in power as he prepares to go on trial for corruption charges.

Netanyahu was formally charged with bribery, fraud and breach of trust in January, becoming the first Israeli prime minister ever indicted in office. His trial was due to open in March but has been postponed until May 24.

Under the deal, Netanyahu and Gantz agreed to share the premiership, with Netanyahu serving as prime minister the first 18 months and Gantz serving the next 18 months.

It also includes a clause to advance plans to annex parts of the occupied West Bank, including Israeli settlements, starting on July 1.

Saturday’s protest was organised by the Movement for Quality Government in Israel, one of the advocacy groups that has filed a legal challenge to the country’s Supreme Court.

Smaller protests also took place in other cities across Israel.

The groups are asking the high court to ban any indicted politician, including Netanyahu, from being allowed to form a new government. They also say that parts of the coalition deal are illegal.

The Supreme Court will meet for two days from Sunday to consider whether to block the agreement.

If the court strikes down the coalition deal, Israel could be plunged into a fourth consecutive election in just over 12 months.

Tags: ISRAEL, Middle East
You may also like
Recent News:
This website uses cookies to improve your user experience and to provide you with advertisements that are relevant to your interests. By continuing to browse the site you are agreeing to our use of cookies.Ok