WASHINGTON/HONG KONG (Reuters) – U.S. President Donald Trump said on Friday he was ordering his administration to begin the process of eliminating special treatment for Hong Kong to punish China for its plans to impose new security legislation there, a potential bombshell for the territory’s status as a global financial center.

In making the announcement at a White House news conference, Trump aimed some of his toughest rhetoric yet against China, saying it had broken its word over Hong Kong’s autonomy.

Trump called this a tragedy for the people of Hong Kong, China and the world, having already attacked Beijing’s handling of the coronavirus pandemic, which began in the Chinese city of Wuhan. Trump said China’s “malfeasance” was responsible for massive suffering and economic damage worldwide.

“We will take action to revoke Hong Kong’s preferential treatment as a separate customs and travel territory from the rest of China,” Trump said, adding that the United States would also impose sanctions on individuals seen as responsible for “smothering – absolutely smothering – Hong Kong’s freedom.”

Trump said his announcement would “affect the full range of agreements we have with Hong Kong,” from the U.S. extradition treaty to export controls on dual-use technologies and more “with few exceptions.”

Trump gave no time frame for the moves, suggesting he may be trying to buy time before deciding whether to implement the most drastic measures that have drawn strong resistance from U.S. companies operating in the territory.

He said he also would issue a proclamation on Friday to better safeguard vital university research by suspending the entry of foreign nationals from China identified as potential security risks.

Sources, including a current U.S. official, told Reuters on Thursday that the latter move, which had been expected, could impact 3,000 to 5,000 Chinese graduate students.

Trump’s tough rhetoric against China comes in the midst of a 2020 re-election campaign in which opinion polls show U.S. voters increasingly embittered toward Beijing, especially over the novel coronavirus. 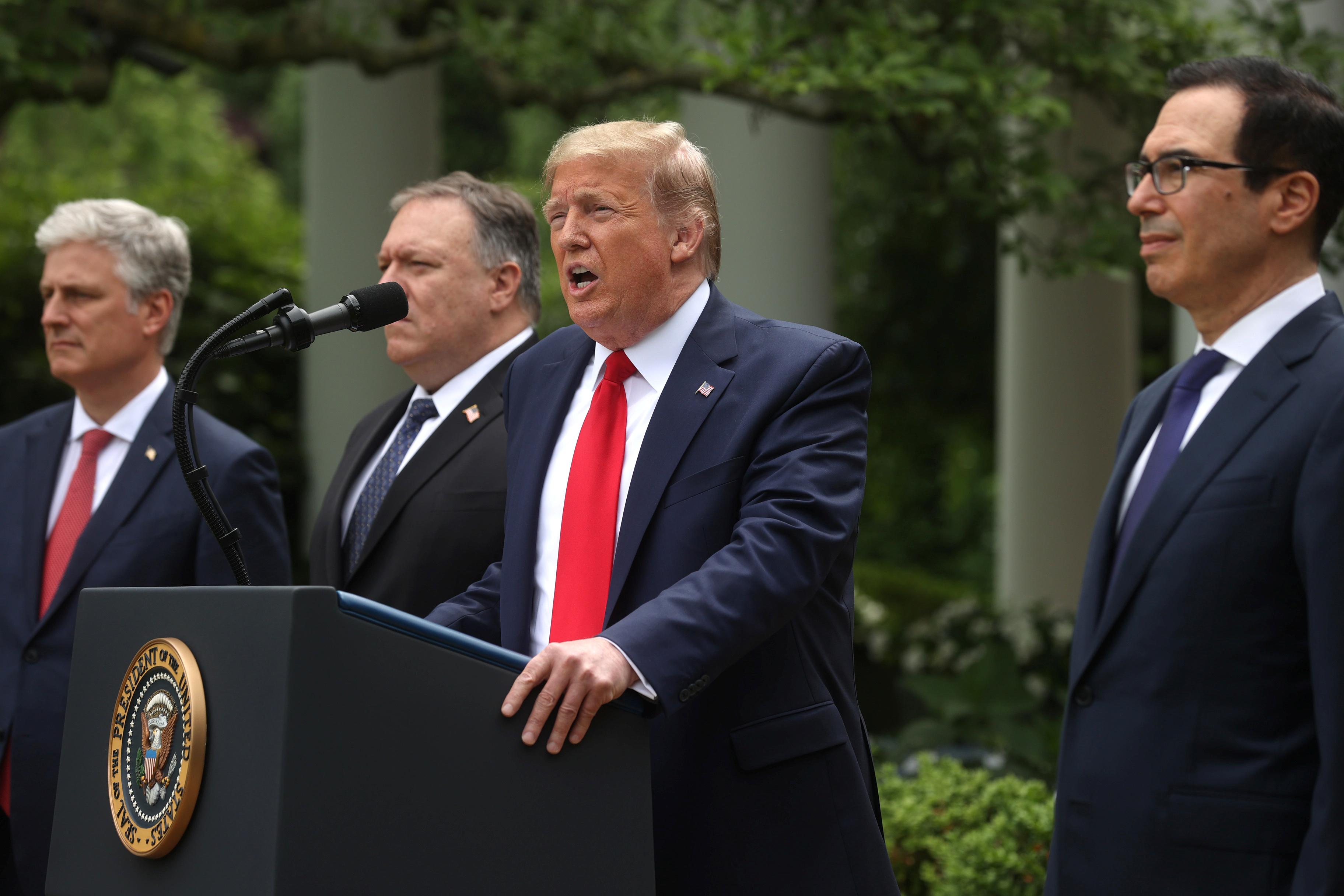 However, Trump may be mindful that a more serious rupture with China could upend his hard-fought Phase One trade deal with the world’s second-largest economy, which he has counted on for economic benefit in major U.S. farm states.

He also will have to take into account the effect on the more than 1,300 U.S. firms that have offices in Hong Kong and provide about 100,000 jobs.

Trump’s announcement follows Chinese plans to impose new national security legislation on the former British colony. Secretary of State Mike Pompeo has said the territory no longer warrants special treatment under U.S. law that has enabled it to remain a global financial center.

Earlier Hong Kong’s Beijing-backed government told the United States to keep out of the debate over national security legislation being imposed by China, and warned that withdrawal of the financial hub’s special status under U.S. law could backfire on the American economy.

“Any sanctions are a double-edged sword that will not only harm the interests of Hong Kong but also significantly those of the U.S.,” it said in a statement late on Thursday.

It said that from 2009 to 2018, the cumulative U.S. trade surplus of $297 billion with Hong Kong was the biggest among all U.S. trading partners.

In the latest assertion of Beijing’s authority over Hong Kong, China’s Ministry of Public Security (MPS) said it would “direct and support Hong Kong police to stop violence and restore order.”

Chinese authorities and Hong Kong’s government say the legislation poses no threat to the city’s autonomy and the interests of foreign investors will be preserved.

Tags: Hong Kong, HONGKONG, PROTESTS, US
You may also like
Recent News:
This website uses cookies to improve your user experience and to provide you with advertisements that are relevant to your interests. By continuing to browse the site you are agreeing to our use of cookies.Ok