Civilians in conflict-hit Sudanese region face attacks and arrests even after removal of ex-President Omar al-Bashir.

Khartoum, Sudan – Ibrahim Arbab had no option but to flee.

Having heard of a mass killing in a nearby village, the 34-year-old and his family late last month sought shelter in el-Geneina, the capital of Sudan’s West Darfur state. Thousands of others did the same.

“The Janjaweed will definitely come after you,” Arbab said, referring to the feared militias who have long been accused of committing atrocities in Darfur, in the west of Sudan.

At least 60 people were killed – mostly unarmed civilians from the Black African Masalit tribe – when some 500 armed men attacked Masteri village, according to the United Nations, the latest in a string of attacks that have left several villages burned and markets looted.

Locals blamed the Janjaweed, nomadic Arab militias which were extensively armed by Sudan’s former President Omar al-Bashir after mostly non-Arab rebels took up arms in 2003 accusing the central government in the capital, Khartoum, of political and economic marginalisation. 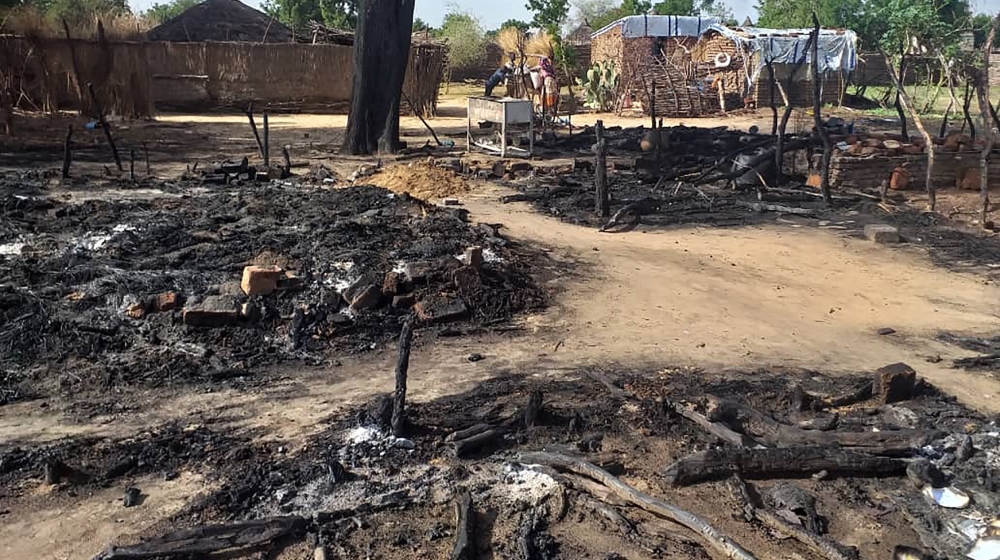 One of those killed in the July 25 attack was Arbab’s brother-in-law, 44-year-old Yousef Adam, who used to work as a cattle trader after becoming displaced in recent years due to the conflict.

“He was sitting inside his house, when the Janjaweed came in and asked him if he had a gun,” Arbab said in a telephone interview. “They searched his house before shooting him on his chest with two bullets and one on his head – in front of my sister.”

At el-Geneina, the pain is too much for the displaced survivors and relatives of victims.

“The local county is now full of widows and bereaved,” said Arbab. “I just can’t stay with them, it’s heartbreaking seeing them, they refuse to eat or drink.”

Buthaina Ali, who, like Arbab, hails from the village of Nguoro, fled with her mother and grandmother after the attack in Masteri.

“We know when they attack one village nearby, they will come to us as well, so we left everything behind and came here,” said the 25-year-old.

Al-Bashir has been jailed in Khartoum since his military overthrow last year following months-long protests against his 30-year rule. The former president is wanted by the International Criminal Court (ICC) for alleged war crimes, genocide and crimes against humanity in the Darfur conflict, which has killed some 300,000 people and displaced millions. The war has slowed down in recent years but is yet to end despite a ceasefire, with warring factions negotiating a peace deal with Sudan’s transitional government that came to power last year.

The Sudan Sovereign Council, which is tasked with leading Sudan to elections in 2022, has made ending Sudan’s multiple conflicts one of its main priorities. According to the delegation negotiating with the armed groups, al-Bashir could appear before ICC prosecutors, although it is still not clear how this could happen.

In Darfur, al-Bashir’s removal from office in April 2019 raised hopes among civilians that the violence would ease in the region – but these proved short-lived.

Incidents of killing, rape and burning down of villages by militias have continued over the past 15 months, with hundreds of people killed and thousands forced to flee to Chad and other parts of Sudan.

Following last week’s mass killing, Prime Minister Abdalla Hamdok promised to send troops to the region to “protect citizens and the farming citizens” while officials described the incident as a tribal conflict.

“People of Darfur … you are all relatives and one family … We call you people of Darfur, don’t let the criminals to take the chance,” said Mohamed Hamdan Dagalo, deputy head of the sovereign council and head of the Rapid Support Forces (RSF), a paramilitary unit that was established by al-Bashir in 2013 from the remnants of the Janjaweed.

Dagalo, widely known as Hemeti, went on to accuse unspecified internal parties, whom he accused of compromising the peace-making efforts with the rebels of Darfur, as well as of South Kordofan and Blue Nile states.

Meanwhile, a joint United Nations-African Union peacekeeping mission to Darfur is expected to stop operations by the end of the year and be replaced by a political mission with no peacekeeping powers focused on supporting the transitional government in its efforts to pave the way for civilian rule.

But the prospect has left many Darfuris fearing that they will be left without protection.

The attack on Masteri was the second major violent incident in West Darfur against the Masalit community since December 2019, when thousands were forced to flee an outbreak of violence, including assaults on displacement camps.

However, Abdulrahman Eissa, a lawyer and member of the el-Geneina-based Darfur Bar Association, said: “None of the main criminals have been arrested or held into account in both of the incidents.”

Activists in Darfur have accused high-ranking RSF officers of being behind both attacks. The RSF has not addressed the allegations but promised to hold the perpetrators to account. 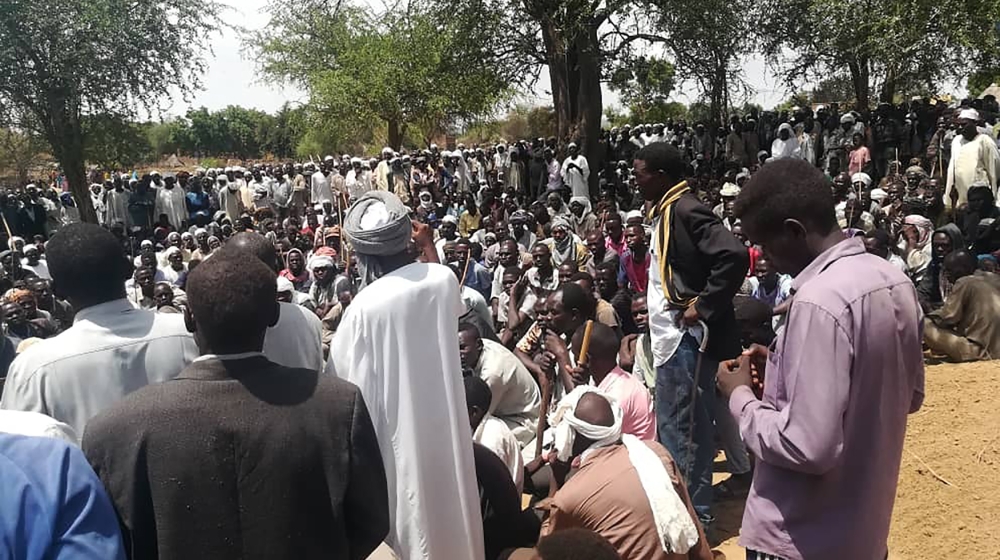 Meanwhile, many have expressed frustration at the pattern of promoting tribal reconciliation in the wake of such attacks, arguing that the perpetrators are being protected by such talks instead of facing justice.

“The government’s encouragement of these types of tribal reconciliation is a form of escaping from the punishment,” said el-Sadig Ali Hassan, the acting head of Darfur Bar Association. “The perpetrators are getting protection by these kind of conferences of reconciliation and they can go and commit more crimes,” he added.

In recent weeks, civilians have staged more than 10 sit-ins across Darfur, demanding protection from the militias and to be able to farm the land that was taken from them in the early years of the war.

But some of them have come under attack, including last month in Fata Borno, in North Darfur state, when armed groups killed at least 12 people and wounded 14 others.

Dozens of members of these so-called resistance committees, which were instrumental in last year’s protests against al-Bashir, have also been arbitrarily arrested, according to the Darfur Bar Association, with some reportedly subjected to torture.

Separately, the Al-Khatim Adlan Center for Enlightenment says 72 men, including eight teenagers aged between 15 and 18, have been arrested in Darfur by the RSF in recent months while trying to cross the border to Chad to seek work opportunities.

The NGO promoting human rights says many of them have been transferred to Omdurman, the twin city of Khartoum, without being able to see their families or lawyers.

“Because of the conflict, many of [the people of Darfur] have lost their land and the only way to make a living is by working as traders between Sudan and the neighbouring countries,” said the NGO’s Abu-Hurira Ahmed, who managed to visit some of the detainees. “But even for doing that, they face huge challenges for it.”

The UN has warned the escalating violence and the subsequent declaration of a 24-hour curfew is hampering humanitarian operations in parts of West Darfur, with access to nutrition, water and sanitation, health and other critical services compromised.

Across Sudan, the UN says almost 10 million people are now facing food shortages due to conflict, rising prices and the coronavirus pandemic, with many of these people being in the country’s conflict-hit areas.

Back in el-Geneina, Arbab said the displaced people are left without any assistance.

“I have been displaced four times since the beginning of the war,” said the father of two. 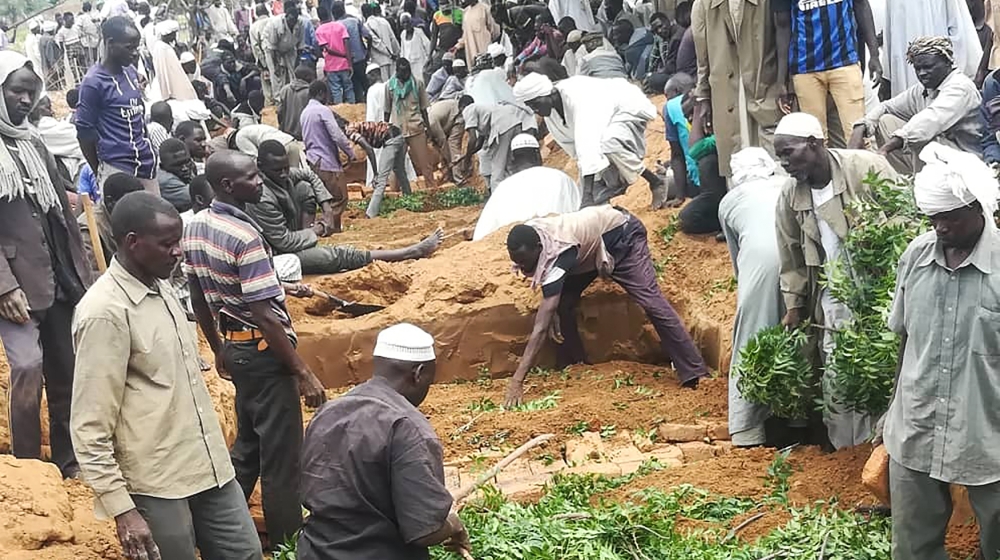 Tags: civilians, Darfur, in, pay, price
You may also like
Recent News: