As India goes into lockdown, migrant workers without protections are desperately trying to return home. 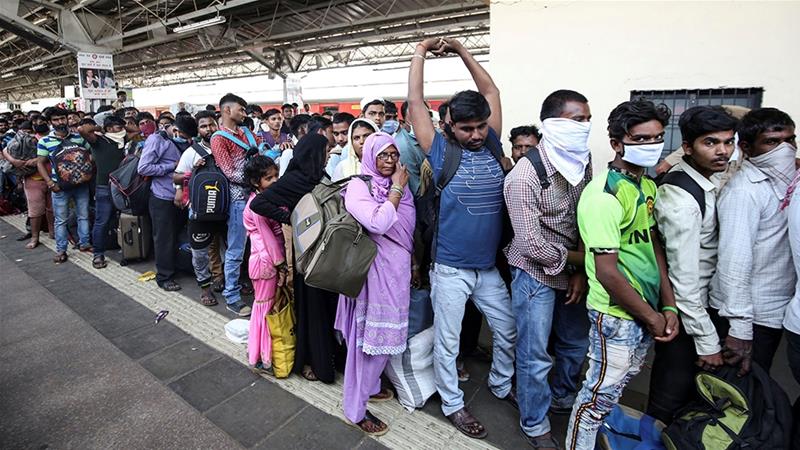 On Saturday, the 50th day since India’s first coronavirus case was confirmed, Parma Bhandari called his family in Nepal to reassure them that he would be coming home. They were not all going to die without seeing each other, he told them.

A sum equivalent to $2,100 had been paid for a rickety bus to take him and about 60 other men on a 2,000km journey from the western Indian state of Pune to their homes in the hills of Mangalsen in Nepal.

But by the next day, Bhandari’s promise to return to his family was dashed, as India’s interstate borders were ordered closed.

With a lockdown rapidly unfolding across India as it struggles to contain the rapid spread of the coronavirus, its vast migrant workforce is finding its cities deeply inhospitable. 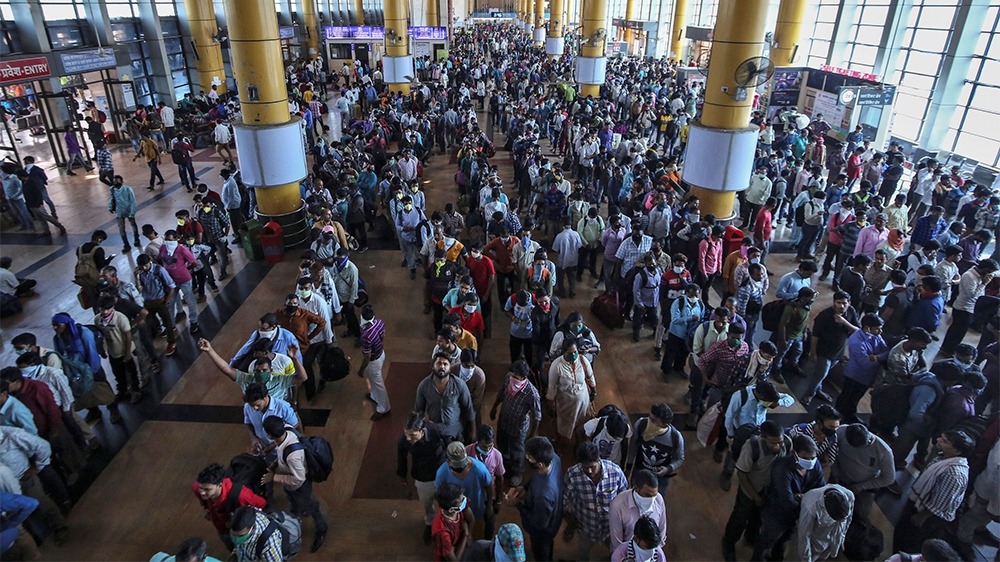 Poorly paid and often looked upon with hostility, at the best of times, their lives are precarious. At this moment of crisis, their alienation from cities, where many of their families have lived for generations, could be a significant factor in the further spread of the disease to India’s desperately poor hinterlands.

‘An avalanche of cases’

By global comparison, India is not among the worst-hit countries yet. As of March 24, India was reporting 522 confirmed cases and nine deaths.

But Indian doctors and epidemiologists fear that an avalanche of cases is just around the corner.

India has been conducting testing for the virus at levels lower than almost any other country in the world. Only 15 percent of all deaths are officially certified, meaning that accurate statistics over the causes can not be relied upon.

At the same time, largely voluntary measures like social distancing and self-quarantining may have been poorly observed. Indian media is rife with stories of people who have flouted self-quarantine orders to travel widely and attend public events including weddings, parties and football matches.

The first cases in India were “imported” from China, Europe and the Middle East.

In the weeks that followed, community transmission occurred. The second death in the country was of a woman whose son had travelled to Switzerland and Italy.

Movement across India has further spread the virus. A young man from the rural north took a train to Chennai in the south to return to work as a hairdresser; soon after his arrival, he tested positive.

As the country moves towards a near-total lockdown, millions are trying to flee the big cities where the first cases were reported and return to smaller towns and villages in packed public transport in scenes reminiscent of people fleeing war.

More than 90 percent of India’s workforce is employed in the unorganised sector where social security benefits and paid leave are an exception, not the norm. Wages are low and there is little in the bank for people to fall back on. The shutdowns that now cover more than 125 million Indians will hit the poorest hard, and state protections are weak.

Migrants form a large portion of this vulnerable workforce. In its 2011 Census, India counted more than 45 million economic migrants who had moved for work, the large majority of them, men.

Half a million, like Bhandari, come from other countries, with more than 17 million others arriving in cities from India’s villages. Nearly 40 percent of India’s migrants are illiterate, and the jobs they get are low-paying, while most safety nets come with the need for documentary proof that migrants rarely have.

Bhandari lives with five other Nepali men in a single room, and for health emergencies relies on expensive private healthcare paid for either by loans from their employers or charity.

Added to that is anti “outsider” sentiment recently stoked by political parties seeking to win the vote of unemployed local youth.

Thousands of workers, some of whom Bhandari knew, were forced to leave Pune in 2008 after a slew of such xenophobic attacks. Dozens of young women in particular from India’s north-eastern states have been harassed in recent days, amid racial slurs and accusations of spreading the virus.

When crises hit, migrant workers’ thoughts often turn to home, even if, like Bhandari, they have lived in a city for 20 years. Tens of thousands of workers rushed home over the weekend, in a potential blow to India’s coronavirus containment strategy. But many remain stranded in big cities – or even en route home – and they have no protection.

Even if a modest income transfer was to be announced, access to banking remains well short of universal.

According to the World Bank’s Global Findex Database 2017, 80 percent of adults had a bank account but just 43 percent of them had made a withdrawal in the past year.

Some Indian states like Uttar Pradesh and Kerala have announced small amounts of monetary assistance for the next month for the poor, others like New Delhi have offered meals for the homeless at their night shelters.

Bhandari has now given up on making it home. His room-mate Padam Bhandari, 32 says; “Now there is no going back. Whatever it is, we have to face it here.”

But tens of thousands of other migrants are in limbo; stuck at airports and bus stands across the country. After days of being packed together, they might return to their villages, no knowing what they are taking back with them.

Tags: Coronavirus pandemic, Migrants
You may also like
Recent News:
This website uses cookies to improve your user experience and to provide you with advertisements that are relevant to your interests. By continuing to browse the site you are agreeing to our use of cookies.Ok