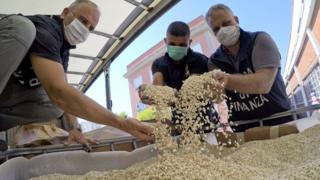 Italian police have seized what they believe is a world-record haul of 14 tonnes of amphetamines they suspect were made in Syria to finance the jihadist group Islamic State (IS).

About 84 million counterfeit Captagon pills worth an estimated €1bn ($1.1bn; £0.9bn) were found in containers at the port of Salerno.

They were hidden inside large drums of paper and gear wheels.

Officers are looking into whether local Camorra crime groups are involved.

Captagon is a brand name for the synthetic stimulant fenethylline. It was originally used to treat attention deficit hyperactivity disorder (ADHD) and narcolepsy, but many countries banned it during the 1980s because of its addictive properties.

Now, counterfeit Captagon is reportedly one of the most popular drugs among affluent youths in the Middle East, particularly in Gulf Arab states.

The drug has also been consumed by combatants in the civil war in Syria, including IS militants, who value its ability to inhibit fear and ward off tiredness.

Syria is believed to be the biggest producer and exporter of counterfeit Captagon.

A Naples police statement said IS – which once controlled large swathes of Syria and is thought to still have thousands of members operating inside the country – was suspected of making large quantities of the drug in areas where it exerted influence “in order to quickly accumulate substantial funding”.

The pills seized in Salerno were sufficient to satisfy the entire European market, and it was likely that a “consortium” of criminal groups would have been involved in their distribution across the continent.

“The hypothesis is that during the [coronavirus] lockdown… production and distribution of synthetic drugs in Europe has practically stopped,” the statement added.

“Many smugglers, even in consortiums, have turned to Syria where production, however, does not seem to have slowed down.”

Tags: €1bn, amphetamin, finds, ITALY, of
You may also like
Recent News:
This website uses cookies to improve your user experience and to provide you with advertisements that are relevant to your interests. By continuing to browse the site you are agreeing to our use of cookies.Ok