The flag is even emblazoned on scores of bright pink fishermen’s overalls known as kappas, a touching tribute to one British woman, Caroline Pover, and the donors who backed her extraordinary work to support a community in crisis. Ten years ago today, a magnitude 9.0 earthquake – the most powerful in Japan’s history and fourth-largest ever recorded – triggered a huge tsunami that swept hundreds of miles inland, engulfing towns and killing almost 20,000 people. At its peak, the wave measured 130ft high. Entire villages were swept away. Some 99 per cent of the fatalities occurred along the east coast of Tohoku.

It was there that a meltdown in the Fukushima Daiichi Nuclear Power Plant caused the worst nuclear disaster since Chernobyl.

Almost 500,000 people were made homeless and livelihoods were ruined in an instant. Survivors were traumatised.

The world watched on in horror and then, as so often happens, it moved on. But not Caroline.

A teacher and author from Devon who had lived in Tokyo for 15 years, she had been on holiday on the little island of Saipan when the earthquake and tsunami hit.

Along with locals, she literally ran for the hills. A passing police car took her to a hilltop evacuation site where she watched, and waited, for six terrifying hours.

“I didn’t know how high we were or where we were and I was on my own,” she recalls. “There was a constant swishing sound. It was the trees but it made me jump.”

After the tsunami warning lifted, she returned to her beachfront hotel. “I was too scared to go to bed and I sat in the lobby glued to the screen,” she says.

“By 4am I couldn’t cope with it any more so I went to bed fully clothed with my trainers kept on.” She slept like that, ready to flee, for a week.

Caroline later learned the tsunami did reach Saipan but the surrounding Marianas Trench, the world’s deepest oceanic trench, and coral reef diminished its impact. She had been lucky. 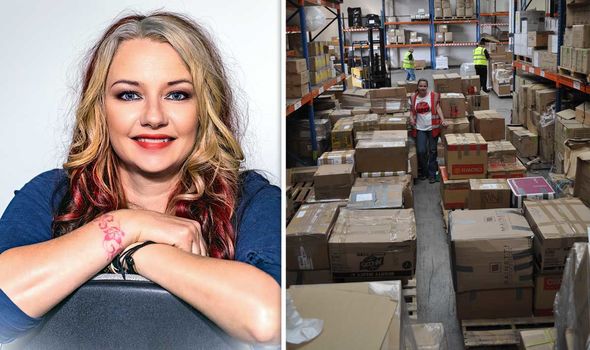 The next few days passed in “shock and helplessness”. Her friends and then-husband in Tokyo were safe but Caroline felt she couldn’t return there.

“I had a strong need to help,” she says. “I felt I couldn’t go up north because my Japanese wasn’t good enough and I didn’t know anything about disaster zones.”

So she flew back to Britain, borrowed a van from Hitachi and toured 13 English schools in two weeks collecting donations. “I was so driven and single-minded,” she says.

Richard Branson’s Virgin Atlantic airline flew her aid package to Tokyo for free, so several weeks after the disaster, she arrived with 10,000 items of essential clothing, toiletries, nappies, pet food and children’s games.

On arriving in Tokyo, she heard about the Oshika Peninsula in Tohoku, where the tsunami first hit.

“There was no help or volunteer organisations, only people trying to live in what was left of their homes,” Caroline says, talking to me from her home in Cirencester, where she runs her business Auntie Caroline’s Pickled Onions. “I thought, ‘That’s exactly where I want to go’.”

With another volunteer, she drove a two-ton truck, covered in Union Flags, north from Tokyo with the donations. Her first impression of the peninsula was of “a disaster movie”.

“There were boats on top of buildings and mangled cars – one was sticking out of a school swimming pool,” she says.

“Only the coastal road was cleared. There was debris and rubble everywhere. I’ve never seen anything like it.” 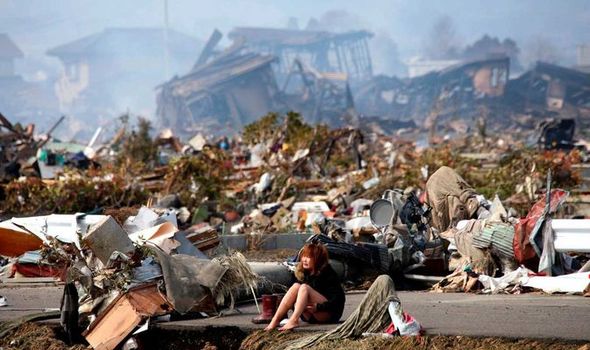 A dank odour pervaded the air. “It was rotting wood – and animals, fish and people,” Caroline, now 49, says.

As her truck travelled from one village to the next, she was buoyed by the warm responses she encountered. “People were welcoming and appreciative, never taking more than they needed,” she says. “I had to force them to take more stuff.”

She went back to Britain for more supplies and returned to what had become a wasteland once the debris was cleared.

That second trip to Oshika lasted a month, during which time she formed a lifelong bond with the Oharahama community, home to Samurai descendants.

Only two people there died in the tsunami but nearly everyone lost their homes and, in the aftermath, half the 150-strong population left.

Everything had to be rebuilt on higher ground. She helped those who were left clear dead bamboo from the forest and fished for oysters with the elderly fishermen known as the Ohara boys. At night they belted out Beatles tracks together.

“They were tactile and that surprised me, as people in Tokyo tend not to touch you,” she says. “They never spoke to me like a foreigner.”

Her colourful knickers, strung up on a makeshift washing line, became the talk of the village.

“At the beginning they thought, ‘Who is this woman? She doesn’t speak Japanese properly. What she’s doing here? She’s out on the boat and in the forest with a chainsaw in her hand’,” Caroline laughs. She knows this because later on they told her. 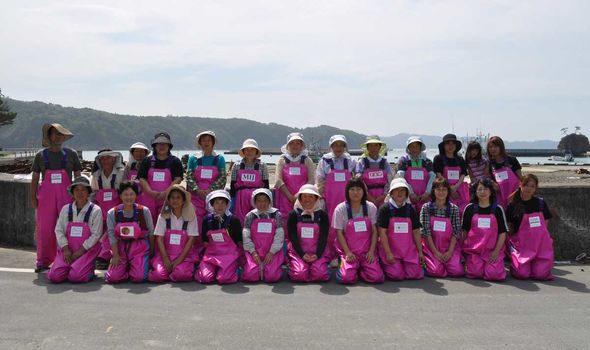 During subsequent visits she found sponsors to fund community projects, one being the repair of the 400-year-old Samurai shrine and its bell tower where people prayed and held festivals.

“Shrines in Japan are community buildings, not just of religious significance,” Caroline explains. “This one was significant because of its history.”

Caroline’s Japanese friends loved them so she painted others, and soon they were everywhere.

She has since raised £170,000, funding more than 30 projects. And as Caroline fell in love with the resilient locals, Oshika found a new daughter. “They adopted me,” she says.

Where only a rusty swing set remained, volunteers built a playground and green enclosure. Caroline filled a toy box with roller skates, hoops and pogo sticks.

The children loved it. She writes in her memoir: “I remember thinking that if I never did anything else with my life then it wouldn’t matter, because I had done this.”

There was frustration at the official response in Japan. Residents lived in cramped temporary shelters for years, not the six months they were promised.

A sea wall was built along Oshika, blocking the view. Locals resented it. They felt they needed to see the sea to understand its risks.

“When people have been through a disaster they feel powerless, their lives are destroyed,” Caroline says. “Involving them in those decisions is an important part of their emotional and psychological recovery.”

One of her proudest achievements was finding sponsors for new pink kappas worn by fishing workers.

The recipients of the first batch were women who were then called the “Pink Ladies of Oshika”.

When Prince William visited Tohoku in 2015, he met Caroline and her Pink Ladies.

“He was lovely, intent on gleaning information so he had a better understanding of the people he was meeting,” Caroline says. “I was impressed.”

At the end of each visit she made to Japan, she began preparing for the next.

“There was never a question of not going back,” she says. “There still isn’t.” 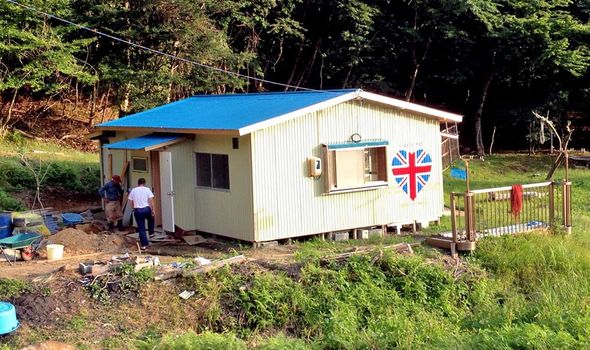 Unable to visit since the pandemic’s arrival, she stays in touch via Zoom and phone calls. She is close to the Sasakis, a couple in their late 60s who rebuilt their seaweed and oyster business from scratch.

Like so many others, they have a tragic tsunami story. Mr Sasaki was at sea when the earthquake hit and his boat rode the waves for two days.

His wife and mother were at their home. Before they could escape, the water submerged the house, ripping Mrs Sasaki senior from her daughter-in-law’s arms. Her body was swept out to sea and never seen again.

Caroline makes a point of never asking, only listening, if her friends tell her their accounts of that day. And she keeps her emotions to herself.

“It was not my disaster or trauma,” she says.

“I was there to help and you don’t do that if you bring tears.

“There are no words of comfort when someone is in the middle of deep grief. The only thing you can do is give them a reason to smile again and make memories.”

Caroline has battled her own hardships. A first-class honours graduate in mathematics and education, she suffered a stroke, aged 19, followed by three more in her mid-30s.

The cause was an undetected hole in the heart. The latter strokes dulled her mathematical mind, she says.

She fulfilled her childhood dreams of becoming a primary school teacher and author, writing a guide for Japanese men on how to date Western women.

But her own marriage didn’t survive the tsunami.

So Caroline left her life in Tokyo for good and returned to England. She had planned to be in Oshika for today’s anniversary but will be calling her friends instead.

Even now, she says, the peninsula remains a “construction site”. Projects require long-term sponsorship. She wants people to know “they are not forgotten”.

Her goal is that people gain hope from reading about Oshika.

“I want people to feel uplifted and encouraged at a time when they might be struggling,” she says.

“We can learn from the resilience of these survivors and apply that to our own situations.”

One Month in Tohoku: An Englishwoman’s Memoir on Life After the Japanese Tsunami is out now and available to buy on Amazon or via Carolinepover.com