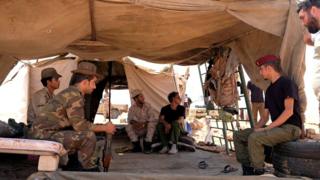 The Tripoli-based and internationally recognised Government of National Accord published a statement that also calls for elections in March next year.

It has been battling against the forces of Gen Khalifa Haftar, which control large parts of the east and south of Libya.

Libya has been riven by violence since Col Muammar Gaddafi was deposed by Nato-backed forces in 2011.

The oil-rich nation is a key transit point for migrants heading to Europe from Africa.

The conflict has caused a split within Nato.

It comes weeks after Turkish ships allegedly targeted a French warship in the Mediterranean – something Ankara strongly denies.

Both sides in Libya’s civil war have international support. Turkey, Italy and Qatar are among those siding with the GNA in Tripoli, while Russia, Egypt and the United Arab Emirates back Gen Haftar.

France is also thought to back Gen Haftar, although leaders in Paris have repeatedly denied this.

A UN arms embargo is in place to stop men and materiel flowing into the country, but it has had little effect.

Turkey agreed a military co-operation deal with the GNA in 2019, and deployed troops to the country in January.

In June, GNA forces finally regained full control of Tripoli thanks to greater help from Turkey. Gen Haftar has reportedly withdrawn his forces from the city’s suburbs.

A UN report leaked in May said that hundreds of mercenaries from the Russian Wagner Group – run by Yevgeny Prigozhin, a close associate of President Vladimir Putin – were operating in Libya in support of Gen Haftar.

There are reports the Wagner Group is evacuating from the country, although these have not been confirmed.

Tags: anno, authorities, Libya's, rival
You may also like
Recent News:
This website uses cookies to improve your user experience and to provide you with advertisements that are relevant to your interests. By continuing to browse the site you are agreeing to our use of cookies.Ok