According to the Met Office, parts of Scotland could see between 30mm and 50mm of rain on Sunday. Monday also sees downpours move south, striking Wales and England.

There is a yellow weather warning for rain from midday to 9pm, with Northern Ireland and parts of Scotland affected.

In the warning, the agency said: “Early showers, some heavy, over Northern Ireland will give way to some more persistent rain, again heavy and perhaps thundery at times, later this morning and afternoon.

“This rain then moves eastwards into Scotland later this afternoon, conditions here having also been showery during the morning. Showers or rain again may also be accompanied by thunder in a few places, perhaps more likely this afternoon. 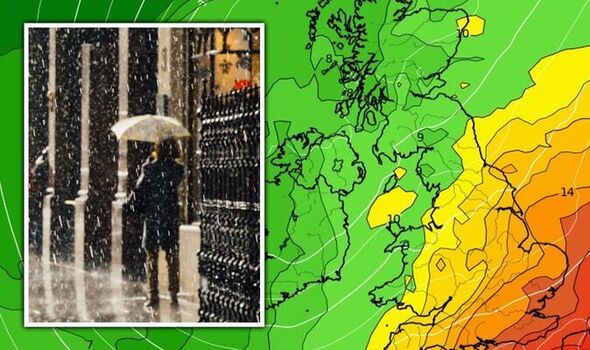 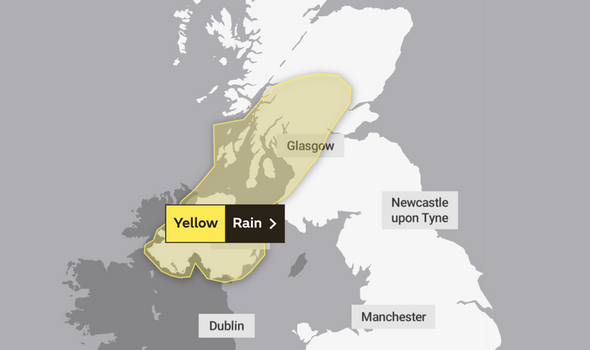 Maps from WXCharts hold that by 3pm on Sunday, 5mm of rain will fall over the north coast of Northern Ireland, with rains between 2mm and 4mm featuring over Ireland, east Scotland and the Irish Sea.

At this time a small band of rain stretches over the midlands, while Wales also sees 2mm of rain.

By 9pm, the worst of the rain will have cleared, but Scotland and the Irish Sea sees up to 3mm an hour.

As Monday morning rolls in, rains up to 5mm an hour cover the north coast of Scotland, with smaller showers along the west coast of Britain, mainly in Manchester and Merseyside, as well as the welsh coast and Cornwall. 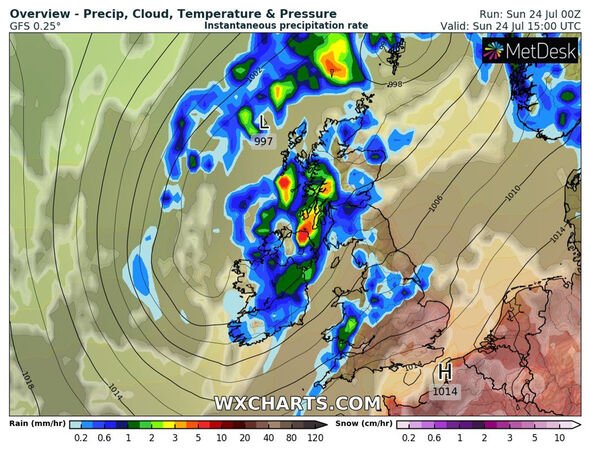 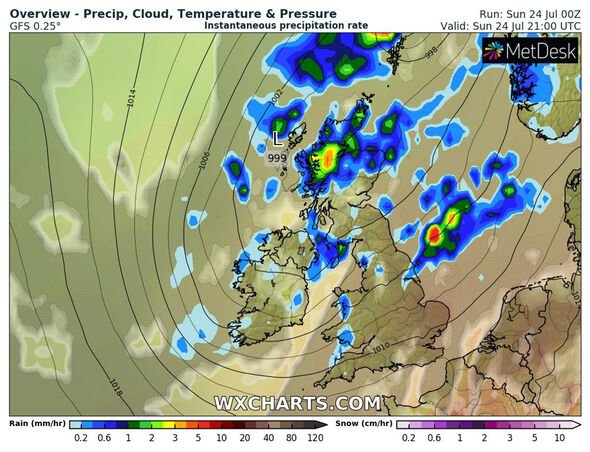 Rains begin to pick up at midday, as the northern band pushes back into central Scotland, while 1mm showers feature across most of Britain baring the south east.

These clear by 6pm, with only north England seeing showers at this time before they clear by midnight.

Over the two days up to midnight on Tuesday, a maximum of 37mm is forecast to fall over Ullapool and the county of Ross & Cromarty.

Over Derry, 14mm is expected to fall, with Scarborough also seeing 11mm. 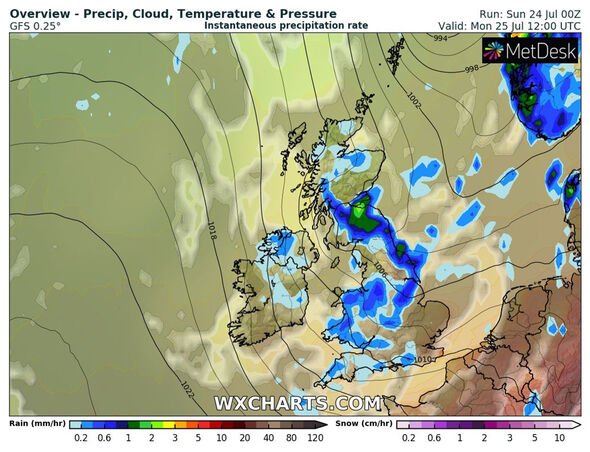 Ian Simpson, Netweather.tv forecaster, wrote for the agency’s website: “Today will be generally cloudy with outbreaks of rain spreading from the west. There are currently some sunny spells in the eastern half of England, but these will tend to become more confined to southern areas and to East Anglia as the day progresses.

“There is a chance of some thunderstorms developing in Northern Ireland during the evening and pushing into western Scotland. During the evening, the rain may extend as far south as Lincolnshire (which has been very dry recently), but further south it is expected to remain generally dry.

“There will be further outbreaks of rain for most tomorrow, but sunny spells are expected to develop more widely, particularly in most eastern parts of the UK.

“There may again be some thunder over Northern Ireland, and thundery outbreaks are expected to develop more widely through Scotland and northern England during the afternoon.

“It will remain dry with plenty of sunshine over much of southern England and East Anglia. It will be another hot day in East Anglia and the south-east with temperatures widely reaching 30 or 31C, and generally the high 20s in the Midlands.

“The coolest regions will be Northern Ireland and western Scotland where most places will reach around 20C.” 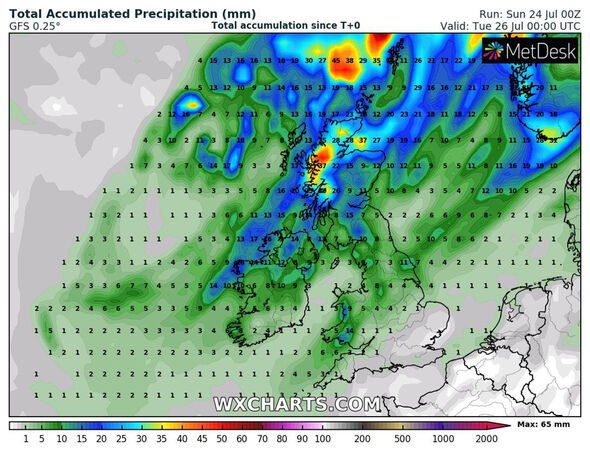 Mr Simpson also said it will “turn cooler through early next week with a mix of sunshine and showers, though staying mainly dry in the south”.

He added: “Monday will have quite widespread showers, especially in Northern Ireland, Scotland and northern England.

“A ridge of high pressure will move in from the west, meaning that showers will be isolated on Tuesday and Wednesday.

“By Tuesday, top temperatures will generally in the low 20s Celsius in England, and the north of Scotland and Northern Ireland will reach 17 to 19C.

“Wednesday will generally have a fair amount of cloud, but the weather will turn sunnier and mainly dry towards the end of next week, resulting in temperatures rising again, generally into the high 20s Celsius.

“By Friday there is potential for some areas in the south to reach around 30C.”