Met Office weather forecasters have extended yellow warnings today, as the UK deals with the remnants of Storm Francis. The country has dealt with a week of extremes, with two named storms emerging within a matter of days. Both pounded the country with thunderstorms, torrential downpours and gale-force winds, which pose a unique risk during summer. 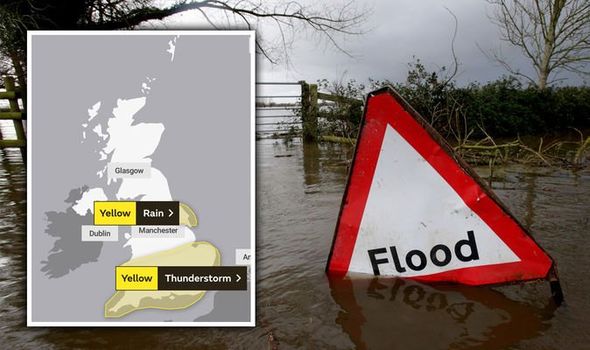 The first is in place for the northeast coast, as one warning which dissipated over Newcaslte earlier this warning has now been replaced by another over Yorkshire.

Forecasters said “persistent” rainfall could see up to 40mm (1.5 inches) poured out over the region.

The warning reads: “Further rainfall is expected during Friday; 15-25 mm will fall quite widely, with a few places seeing 30-40 mm, especially across the North York Moors.

The northeast warning now applies to the following regions:

Tags: ctp_video, headlines, Met Office
You may also like
Recent News:
This website uses cookies to improve your user experience and to provide you with advertisements that are relevant to your interests. By continuing to browse the site you are agreeing to our use of cookies.Ok