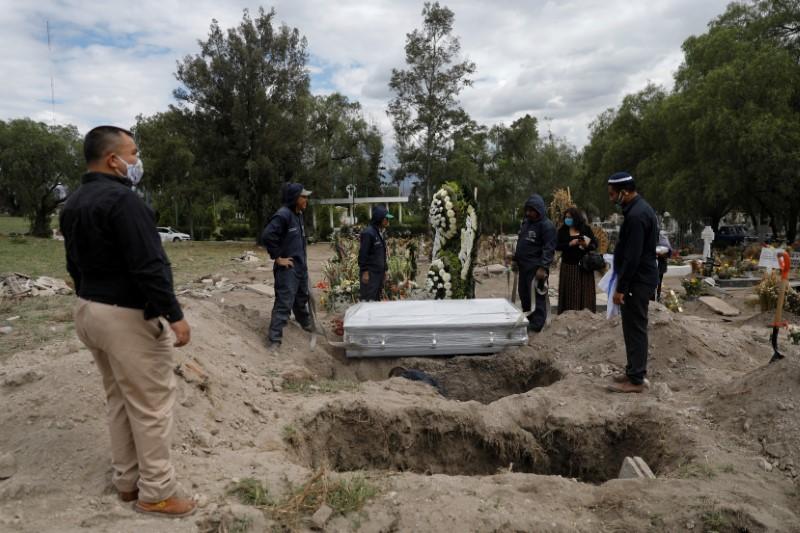 MEXICO CITY (Reuters) – Mexican health authorities reported 1,092 novel coronavirus deaths on Wednesday, the country’s highest toll in one day so far, with total infections surging past 100,000 as the Latin American country emerges as a major center of the pandemic.

The number of deaths was more than twice the previous record, and daily infections were also at an all-time high of 3,912, although Deputy Health Minister Hugo Lopez-Gatell said some cases occurred several days earlier.

Lopez-Gatell attributed the sharp jump in the death toll to the results of a new mortality committee dedicated to better identifying which deaths in the country were caused by the virus.

“Over the past 20 or 25 days, we have had various cases that were slowly passed on to the registry, for various reasons,” he said. “A technical commission has specifically been carrying out complementary methods.”

The additions bring the total number of known cases to 101,238 and deaths to 11,729. Health authorities have previously said the real number is higher.

Mexico had planned to start reopening the country after measures designed to curb the spread of the coronavirus. Instead, deaths and new infections have scaled new peaks this week, dampening expectations for major changes.

Latin America’s second-largest economy is at an earlier stage of the pandemic curve than the neighboring United States.

President Andres Manuel Lopez Obrador’s government has been under U.S. pressure to reopen major sectors of the economy to reactivate supply chains underpinning billions of dollars of business.

Tags: A, Coronavirus, HEALTH, MEXICO, US
You may also like
Recent News:
This website uses cookies to improve your user experience and to provide you with advertisements that are relevant to your interests. By continuing to browse the site you are agreeing to our use of cookies.Ok