Fatima Salman, 43, a social worker and a Muslim American from Detroit, Michigan says she is “definitely” voting for Joe Biden, the Democratic nominee challenging the re-election of United States President Donald Trump.

“I have three children and I worry about their future if Trump gets re-elected,” Salman says. “It’s a matter of our own existence and the future of this country as a whole.”

With early voting already well under way nationwide, there is evidence that in this election, Salman’s vote and that of other Muslim Americans, are well placed to be a significant factor in deciding the winner of the November 3 United States presidential election.

There are an estimated 3.45 million Muslims in the US – only about one percent of the country’s total population – but their concentrations in key swing and battleground states, such as Michigan, Florida, Wisconsin and Pennsylvania, could make their vote especially impactful. 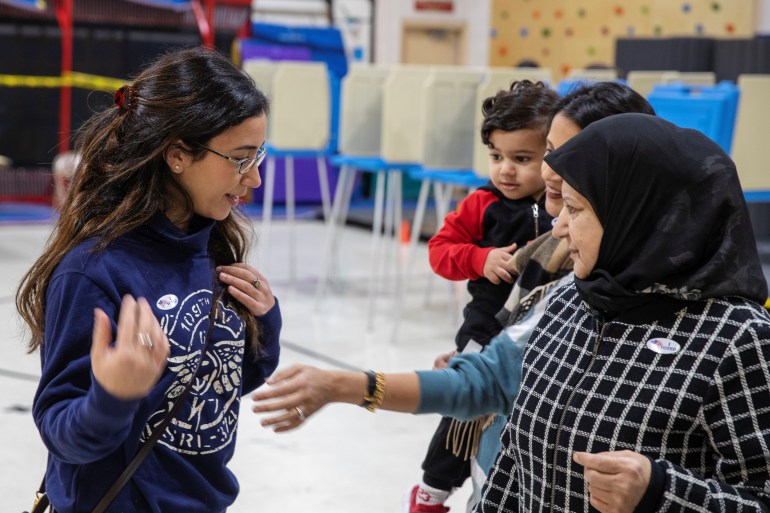 Women putting on “I Voted” stickers after casting their ballots for the state’s primary inside of a polling station in Dearborn Heights, Michigan, US [File: Lucas Jackson/Reuters]The stakes are particularly high in Michigan, a state with 270,000 registered Muslim voters, says Mohamed Gula, organising director of Emgage, a Muslim American advocacy group. Hillary Clinton, in 2016, lost the state to Trump by less than one percentage point – a little over 10,000 votes.

“When it comes down to the value of the Muslim vote, we could easily swing the election,” Gula says.

“Obviously, we will hear foreign policy issues being centred,” Gula says, “but a lot of the issues that we hear today, in regards to what has really impacted the Muslim community are some of the same issues that average Americans also are impacted by.”

Shortly after taking office in 2017, Trump, a Republican, issued an executive order banning nationals from several Muslim-majority countries from entering the US – fulfilling a campaign promise and sending shockwaves across Muslim communities in the US and abroad.

In the face of sustained legal challenges, the policy went through several iterations, but the Supreme Court upheld the third version, affecting the lives of thousands of Americans who were prevented from being joined by relatives, partners and friends.

Trump further alienated Muslims in a series of disparaging comments and tweets blasting “Radical Islamic terrorism” and calling countries on the Muslim ban list “dangerous”. More recently, Trump did not denounce white supremacist groups and instead told one right-wing group, the Proud Boys, who are active throughout Michigan: “Stand back and stand by.”

Pollsters say back in the 1990s, Muslim voters were split almost evenly in their support for Republicans and Democrats. But that gap began to widen post-9/11, and following the administration of George W Bush, when the Republican party was perceived as more hostile to Islam. 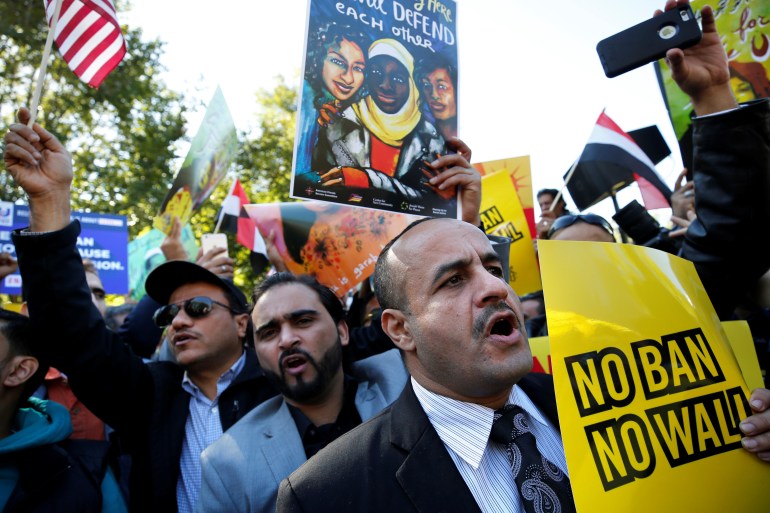 Protesters gather outside the White House for a ‘No Muslim Ban Ever’ rally against what they say are discriminatory policies that unlawfully target American Muslim and immigrant communities, in Washington, US [File: Yuri Gripas/Reuters]Now, there are signs the Biden campaign is looking to capitalise on this sentiment.

“The Muslim vote is part of our strategy to win,” says Farooq Mitha, the Biden campaign’s senior adviser for Muslim American engagement, adding that Biden has put out an agenda for Muslim American communities promising to rescind the Muslim travel ban on “day one” of his administration and tackle hate crimes committed against them.

“Over the last seven months, we have done well over 150 events across Muslim communities and we understand that Muslims can play a pivotal role in battleground states – the traditional ones that we know of, like Michigan, Pennsylvania, Florida and Wisconsin – but now we see even states like Georgia, Texas, Ohio, that could be in play,” Mitha says.

Courtney Parella, Deputy National Secretary for the Trump campaign, said the president intends on ensuring religious liberties, economic prosperity and educational opportunities for Muslims in America, and internationally, and has fostered peace by brokering a deal bringing the United Arab Emirates and Bahrain into normalised diplomatic relations with Israel.

“President Trump understands that faith is part of what unites us as a nation, and he continues to staunchly defend religious freedoms for all Americans,” Parella said in a written statement to Al Jazeera.

“This President has a strong record of success for Muslim Americans and has done what others before him couldn’t – he brought peace between the Christian, Jewish, and Muslim peoples of the Middle East.”

Nationally and in Michigan, Biden is leading Trump in most polls. Polling also shows that the overwhelming majority of Muslim voters support the Democratic party. According to a recent survey by the Council on American-Islamic Relations (CAIR), a Muslim civil rights and advocacy organisation, 71 percent of Muslims say they will vote for Biden. 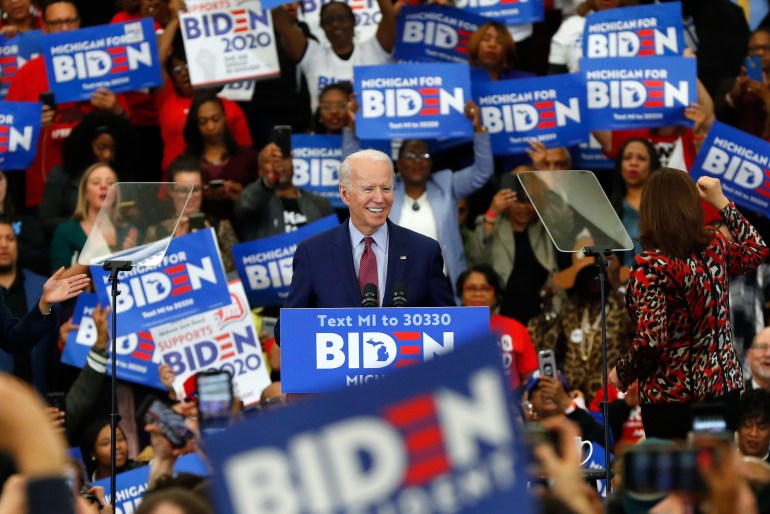 Joe Biden speaking during a campaign rally at Renaissance High School in Detroit [AP Photo/Paul Sancya]But “the Muslim community is not a monolith,” says Mahmoud Al-Hadidi, a physician and chairman of the Michigan Muslim Community Council.

According to the CAIR survey, 18 percent of Muslims said they support Donald Trump, and another 11 percent were either undecided or preferred not to answer.

Al-Hadidi explains that despite significant concerns over rising animosity towards Muslims under the Trump administration and the passage of the travel ban which was “very devastating” and “really degrading” for the Muslim community, there is also a growing sense of disenchantment towards the Democratic party.

Although Muslim Americans, especially the younger generation, have largely supported the protests that erupted this summer over racial inequality and police violence in the wake of the killing of George Floyd – the older generation, many of whom fled wars and instability in their home countries, were very concerned by the violence they witnessed in the streets.

“Safety, peace, and avoiding chaos in the cities, is very important to a lot of people, especially business owners,” al-Hadidi told Al Jazeera, adding that many Muslim business owners felt that Biden did not do enough to condemn vandalism against private businesses – unlike Trump who has promised to crack down on violent protesters. 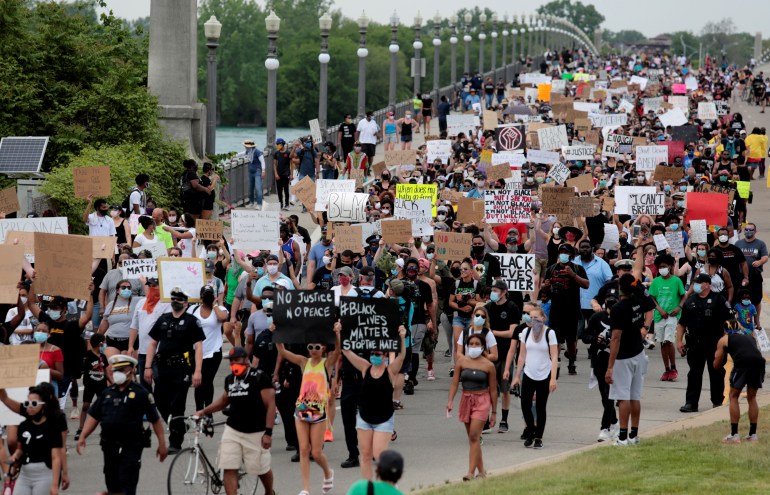 Hundreds of people take part in a peace march across the MacArthur Bridge in Detroit, Michigan on June 5, 2020 to rally against the death in Minneapolis police custody of George Floyd [File: Rebecca Cook/Reuters]Detroit, a city with one of the largest concentrations of Black Americans, became a focus of nightly protests. Although most were peaceful, some saw intense clashes with police and vandalism of downtown Detroit businesses.

As a result, a sizeable proportion of Muslims are “quietly” supportive of Trump, al-Hadidi says, but are afraid to speak up out of fear “of being attacked, called traitors or having their property vandalised”.

Nada al-Hanooti, Executive Director of Emgage’s Michigan chapter says Muslims’ disenchantment with the Democratic Party sunk in after Bernie Sanders, a self-proclaimed democratic socialist the community had rallied around, dropped out of the race in early April. The Vermont senator saw his initial strong lead evaporate after the party’s establishment lined up behind Biden.

“It is going to take a long time to persuade our communities to vote for Biden,” al-Hanooti said. “They’re not going to just jump on the bandwagon of the democratic nominee.”

But for many Muslims, like their average American counterparts, who have been dismayed by Trump’s handling of foreign relations, racial justice protests and the coronavirus pandemic, voting Trump out of office may be a motivation in and of itself. 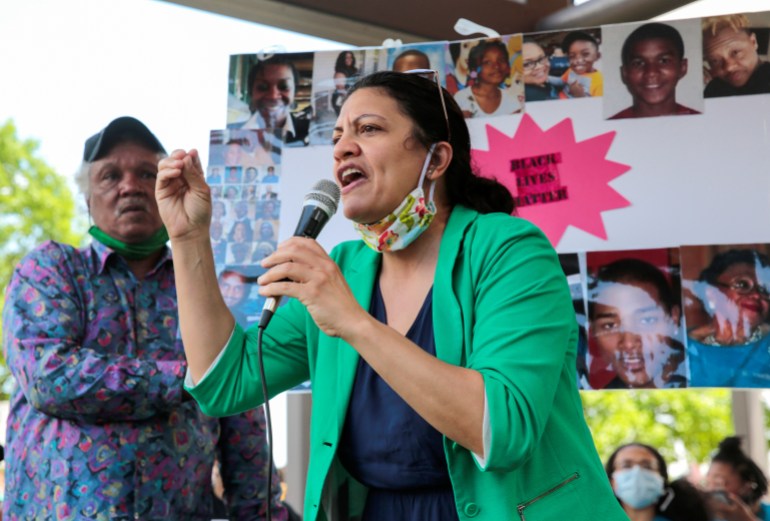 Michigan Democratic US Representative Rashida Tlaib, who is also Muslim, addresses a rally protesting against racial inequality in Detroit, Michigan, following the death in Minneapolis police custody of George Floyd [File: Rebecca Cook/Reuters]“A lot of people will reluctantly vote for Biden, but it’s definitely a vote to get Trump out, and not necessarily to get Biden in,” al-Hanooti says.

Nationally, in a recent Pew Research Center survey, 63 percent of Biden supporters said their vote is more a vote against Trump and not necessarily a vote for Biden.

Lama Samman Nasry, a resident of Franklin, a Detroit suburb, and a mother of four children, said she is one of those reluctant voters, and is unsure if she will cast her vote at all this election.

She said Sanders was her first choice, but also believes that another four years of Trump will be devastating for the country.

“We don’t feel as safe, racism is rising and Trump is fuelling the racists, telling them to stand by, this is scary for us,” Samman Nasry said, adding that her husband and daughters are all voting for Biden, and have been urging her to do the same.

“I am not encouraged to vote for Biden, but I might change my mind and say you know what, let’s give it a try and see what he does, give him a chance.”

Tags: American votes may carr, Muslim
You may also like
Recent News: