US President Donald Trump and Democratic challenger Joe Biden will have their microphones muted for parts of their final debate on Thursday to allow each candidate a block of uninterrupted time to speak and avoid the rancour of the two candidates’ first encounter.

The Commission on Presidential Debates, the sponsor of the televised debate in Nashville, said changes were necessary after the bad-tempered first debate.

Trump repeatedly interrupted Biden during the encounter in Cleveland on September 29, and the discussion ended up in name-calling and insults.

“We realize, after discussions with both campaigns, that neither campaign may be totally satisfied with the measures announced today,” the commission said in a statement. “We are comfortable that these actions strike the right balance and that they are in the interest of the American people, for whom these debates are held.”

For this week’s 90-minute debate, the organisers will give each candidate two minutes of uninterrupted time at the beginning of each 15-minute segment of the debate. NBC News correspondent Kristen Welker will moderate.

“The only candidate whose microphone will be open during these two-minute periods is the candidate who has the floor under the rules,” the commission said. 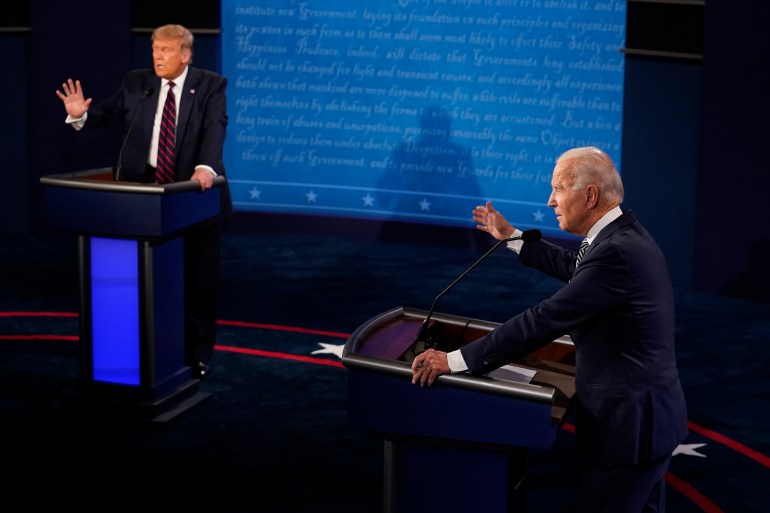 The first debate between Trump and Biden was marred by Trump’s frequent interruptions and bad-tempered exchanges between the two men [File: Morry Gash/Pool via EPA]Trump’s campaign objected to the change, but said he would still take part.

“President Trump is committed to debating Joe Biden regardless of last-minute rule changes from the biased commission in their latest attempt to provide advantage to their favoured candidate,” campaign manager Bill Stepien said.

The commission is a non-partisan body.

The Biden campaign did not immediately respond to a Reuters’ request for comment on the latest developments.

Trump’s camp is also unhappy with Thursday’s proposed topics, which include families, climate change and race, arguing that the discussion should focus more on foreign policy.

Biden’s campaign said both sides has previously agreed to let the moderators choose the subjects. It said Trump wanted to avoid discussing his stewardship of the coronavirus pandemic, which surveys show is the top issue for voters.

“As usual, the president is more concerned with the rules of a debate than he is getting a nation in crisis the help it needs,” Biden spokesman TJ Ducklo said.

Trump, who was admitted to hospital with COVID-19 in early October, backed out of the second scheduled debate, which was supposed to take place last Thursday, because it would have been in a virtual format. Instead, the two men broadcast rival town-hall sessions.

With just two weeks before the presidential election on November 3, Biden has a strong lead nationwide, although the race is closer in some key states.

More than 30 million people have already cast their ballot through early voting.

Tags: microphones for Thursday, Muted
You may also like
Recent News: