This has been a busy week for fact-checkers looking into false and misleading claims about the coronavirus pandemic.

A misleading video featuring American doctors clocked up over 17 million views before social media platforms took it down.

There have been plenty of other claims flying around on US social media accounts, some of which we’ve been debunking.

Claim: Dr Fauci says once manufactured, a Covid-19 vaccine should be rolled out before “proper studies” are done.

Verdict: The quote, widely shared on social media, is false.

A meme generating thousands of likes on Instagram and Facebook this week implies that Dr Anthony Fauci, who is leading America’s coronavirus response, is of the view that a vaccine must be delivered for “immediate human injection. Proper studies can be performed later”.

This same post also suggests Dr Fauci has refused to endorse the use of the drug hydroxychloroquine as a treatment for coronavirus because no “major study” has been done, presumably in an attempt to highlight the inconsistency of his position. 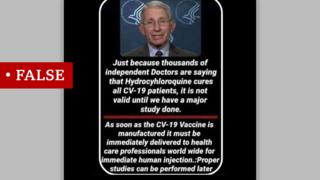 When contacted by the BBC, the US National Institutes of Health (where Dr Fauci works) said the reference to vaccines “is completely made up, Dr Fauci has never said anything like that”.

“Operation Warp Speed” is the US government’s plan to deliver a working vaccine by January 2021.

“The programme will determine the safety of the Covid-19 vaccines under study, ensure the safety of study participants, and maintain the integrity of the vaccine trials,” according to the NIH.

Regarding the comments on hydroxychloroquine studies, the health body said: “Dr Fauci has said publicly that sound clinical research must be conducted to determine whether any particular drug is safe and effective for treating Covid-19.”

Dr Fauci has also recently told the BBC that there have been “randomised control studies” which have shown that hydroxychloroquine is “not effective in the treatment of Covid-19”.

Verdict: We can find no evidence to support this claim.

A post liked and shared 40,000 times on Twitter claims that 6,000 doctors surveyed around the world said hydroxychloroquine “works in Covid patients”.

It was shared without a source and the post gained traction as the “America’s Frontline Doctors” video was going viral this week.

We believe it incorrectly reports the results of a survey of about 6,000 doctors in 30 countries published in April by a company called Sermo.

We contacted the company and they provided data which showed that although 6,000 doctors were approached, only 2,171 responded to that particular question.

Of those, just 37% chose hydroxychloroquine as the most effective treatment out of a list of 15 options. That’s around 800 doctors, or just 13% of those surveyed. Far fewer than the 6,000 claimed in the post above.

Furthermore, the survey company says the participants were doctors registered with them, and so not representative sample of all doctors across the world.

Claim: Vital research into coronavirus treatment is being blocked.

Verdict: This is misleading because it refers to research into a different virus.

Another widely shared tweet this week posted a 2005 laboratory study into the effectiveness of the drug chloroquine against the Sars coronavirus, followed by claims that “blocking access to a proven preventative treatment during a pandemic is a crime against humanity”.

This is highly misleading. The 2005 study was testing chloroquine to combat infection from the Sars virus long before the current coronavirus or Covid-19 was known to exist.

Chloroquine is similar to hydroxychloroquine (the latter is a less toxic form of the former) and it has not been shown to be effective against Covid-19.

Sars is similar to but not the same as the novel coronavirus which causes Covid-19.

Also, this was done in a laboratory setting which means it wasn’t administered to human patients.

Claim: ‘Big pharma’ is blocking the rollout of hydroxychloroquine.

Rumours about the pharmaceutical industry blocking the rollout of hydroxychloroquine have also been widespread this week, particularly following the takedown of the video of the “America’s Frontline Doctors” press conference.

A conservative radio host said in a post shared 3,000 times on Facebook: “Nobody’s gonna make any money off hydroxychloroquine. Which is why, ladies and gentlemen, it is opposed.”

A post shared thousands of times claims “Big Pharma” and “big government” in both the US and Europe have deliberately promoted other drugs because they are more expensive.

One Instagram user claimed that the doctors in the viral video were “risking their lives speaking out against Big Pharma”.

“There is not a shred of evidence that hydroxychloroquine was “blocked” by anyone,” says Prof Stephen Evans of the London School of Hygiene and Tropical Medicine.

He says the pharmaceutical industry does make money from hydroxychloroquine, which is approved for treating other illnesses such malaria.

Tags: A, didn't, DR, Fauci, No, say, this
You may also like
Recent News:
This website uses cookies to improve your user experience and to provide you with advertisements that are relevant to your interests. By continuing to browse the site you are agreeing to our use of cookies.Ok