PARIS (Reuters) – The Cafe de Flore in Paris, once a favourite drinking hole of Simone de Beauvoir and Jean-Paul Sartre, spread its tables along the pavement, in front of the neighbouring book store, and reopened on Tuesday for the first time in 11 weeks. 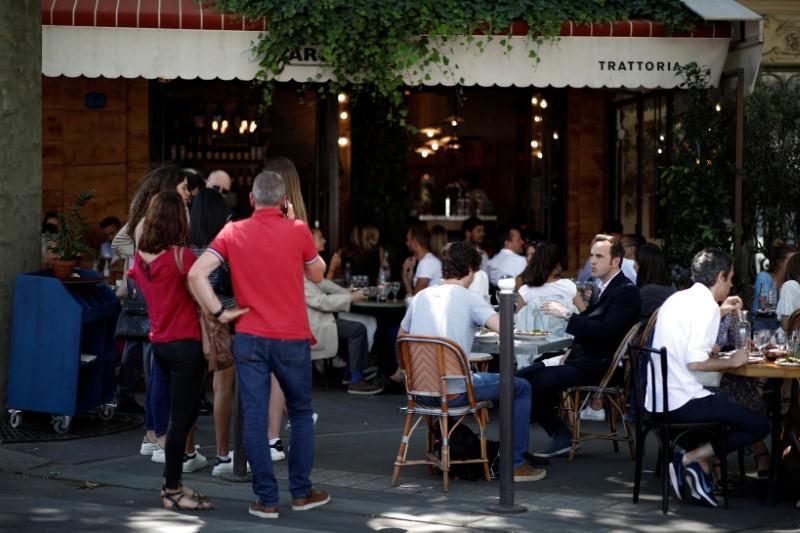 Locals could once again enjoy a morning espresso, albeit only at tables spaced a metre apart, as the government allowed cafes and restaurants to open outdoor terraces, lifted travel curbs within France and permitted sunbathing on beaches.

Across Paris, cafe owners encroached on sidewalks to maximise the number of tables they could set. Each had to submit their new configuration to the local authorities online and in the days ahead their new layout will be inspected.

Those without little or no outdoor seating have been less fortunate.

Across the boutique-lined Boulevard Saint-Germain from the Cafe de Flore, the Brasserie Lipp, which kept serving through World War Two but was shut down by the coronavirus pandemic, remained closed.

Even under a bright blue sky, business started slowly. Servers wore masks and said they were still finding their way under the new conditions. Some cafes replaced menus with chalkboards, others asked patrons to scan a barcode to bring up the menu on their smartphone.

At the Le Bourbon brasserie, staff set out about a dozen tables in a small square behind the National Assembly. Manager Jean-Pierre Viala said they were at the mercy of the weather gods, with rain forecast later in the week.

“It’s hard to predict how much food to buy in when you’re dependent on the weather,” he said.

Finance Minister Bruno le Maire on Tuesday promised a solidarity fund to help cafes and restaurants would run until the end of 2020. Many depend on the tourists who in normal times swarm through Paris, the world’s most visited city.

“We desperately need borders to re-open,” said Arnaud Lacroix, whose coffee and ice-cream bar is located opposite the fire-ravaged Notre-Dame of Paris cathedral.

In the past two years, his business has been hammered by anti-government “yellow vest” protests, the cathedral blaze and now the virus.

“We can’t hold out much longer,” he said.

(This story has been refiled to correct spelling in headline)

Tags: c, Coronavirus, FRANCE, HEALTH, US
You may also like
Recent News:
This website uses cookies to improve your user experience and to provide you with advertisements that are relevant to your interests. By continuing to browse the site you are agreeing to our use of cookies.Ok