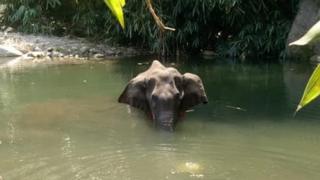 Wildlife officials in India are investigating the death of a pregnant elephant from allegedly eating a pineapple containing firecrackers.

Environment Minister Prakash Javadekar said the government had taken a “serious note of the killing”.

The incident in Kerala caused outrage after a forest official posted about the death on social media.

India is home to some 27,000 wild elephants. Another 2,500 elephants are held in captivity.

Mr Javadekar tweeted that the government would probe the killing.

The Kerala forest department said on Thursday that “several suspects” were being questioned in connection with the incident. It earlier said there was no “conclusive evidence” to link the death to firecrackers.

In the offence registered as per the sections of WL(P)A for hunting the elephant, several suspects are being interrogated. SIT formed for the purpose is making a significant headway in this regard.Forest Dept will leave no stone unturned to ensure max punishment to the offenders

There's no conclusive evidence that injury to lower jaw was caused by pineapple stuffed wd cracker. However this may be a possibility. Dept. has booked offence against unknown offenders, whose identity is being established.

The incident has sparked outrage on social media. Ratan Tata, chairman of Tata Sons and one of India’s leading businessmen, said “justice needs to prevail”.

Appalled to hear about what happened in Kerala. Let's treat our animals with love and bring an end to these cowardly acts. pic.twitter.com/3oIVZASpag

The 15-year-old pachyderm, which was two months pregnant, apparently strayed into a village near the Silent Valley National Park in Palakkad district last week and ate a pineapple containing firecrackers.

In a Facebook post, forest official Mohan Krishnan said the firecrackers exploded in the animal’s mouth and the elephant walked for days in pain before dying on 27 May, standing in a river.

He wrote that the animal “didn’t harm a single human being even when she ran in searing pain in the streets of the village”.

“When I saw her, she was standing in the river without making any noise. She was possibly getting some relief from immersing her trunk and mouth into the water,” Mr Krishnan told the BBC.

A senior local forest official said the elephant stood in water for four days even as wildlife workers and vets tried to save her.

“We tried our best to save the lives of both the mother and the child, but we failed,” KK Sunil Kumar told the BBC.

However, it is not clear whether the elephant was fed the firecracker spiked fruit or accidentally ate it.

Farmers often scatter such fruits in the area to keep animals – mainly wild boar and pigs – away from damaging their crops, officials say.

Reports say that elephants are at risk when they stray into human settlements to look for food.

“People are getting into conflicts and they resort to different mitigation methods – they put up electric fences, build trenches or become more brutal and use a crude bomb [to keep the animals away],” OP Nammeer, a professor of wildlife at Kerala Agriculture University, told the Mint newspaper.

Tags: 'firecra, elephant, Outrage, over
You may also like
Recent News:
This website uses cookies to improve your user experience and to provide you with advertisements that are relevant to your interests. By continuing to browse the site you are agreeing to our use of cookies.Ok