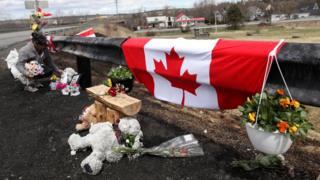 Police say they were preparing an emergency alert when police shot and killed the suspect in the worst mass shooting in Canada’s modern history.

Authorities have been criticised for relying on social media to alert Nova Scotia residents the manhunt for the gunman.

At least 22 people were killed over 13 hours that spanned Saturday night to Sunday morning.

Police are yet to determine a motive for the crime.

The victims include a 17-year-old, a pregnant healthcare worker and a veteran Royal Canadian Mounted Police (RCMP) officer.

Family members of some victims have spoken publicly about whether a province-wide alert sent to all residents of Nova Scotia could have prevented some of the deaths.

Responders found “several casualties inside and outside of a home” but no suspect.

They also discovered “multiple sites in the immediate area, including structures and vehicles that were on fire”.

One tweet was sent out at the time warning residents of Portapique, where the rampage began, to stay indoors due to a “firearms complaint”.

Police set up two parameters to hunt for the suspect.

It was at around 08:00 local time (11:00 GMT) on Sunday morning that police met with a key witness who gave them critical information about the gunman, Chief Supt Leather said.

After that, the RCMP began providing frequent updates on Twitter, which were picked up by media.

Victims were also found in the communities of Wentworth, Debert, Shubenacadie/Milford and Enfield.

The search ended shortly before midday on Sunday when the suspect was located by police at a service station in Enfield, north of the provincial capital of Halifax. He was shot and later died.

They were in the process of preparing our emergency notification when the gunman was shot by police.

The investigator said he was “very satisfied with the messaging” by police given the complexity of the crime they were working with.

What more do we know about the investigation?

Little is known about what motivated the suspect, Gabriel Wortman, 51 or why he chose his victims.

Police said on Wednesday that while their investigation revealed the suspected shooter acted alone, “we are continuing to investigate whether anyone may has assisted him leading up to the incident – that is still part of the active investigation”.

They are expected to release a more detailed timeline of the course of events in the coming days. The rampage took place in multiple communities and over 13 hours.

There are 16 crime scenes being investigated, including multiple fires.

Police say the hunt for the gunman was hampered by the fact he was driving a vehicle that looked like a police cruiser and was wearing a police uniform. How he procured both is part of the investigation.

Who were the victims?

Among the dead were a teacher, a home care nurse working on the frontlines of the coronavirus pandemic, and an RCMP officer.

A national virtual vigil will be held this week to honour the victims of the shooting, as the province is locked-down due to the virus.

The first victim whose name was made public was Constable Heidi Stevenson, a 23-year veteran of the force and a mother of two. The most recent were Alanna Jenkins and Sean McLeod, both managers at correctional facilities.

Another was Heather O’Brien, who was caring for the elderly with the non-profit Victorian Order of Nurses (VON), during the provincial-wide lockdown before she was killed near her hometown of Debert, Nova Scotia.

Another VON employee, Kristen Beaton, was also killed during the shooting.

Lisa McCully, a mother of two, was among the victims. McCully had been a school teacher at Debert Elementary School, according to the school’s website.

Not all the victims – both men and women, according to police, and one 17-year-old – have been named.

Tags: ale, defend, lack, of, Police, wide
You may also like
Recent News:
This website uses cookies to improve your user experience and to provide you with advertisements that are relevant to your interests. By continuing to browse the site you are agreeing to our use of cookies.Ok