Voters in Guinea have cast their ballots in a high-stakes presidential poll taking place after months of bloody unrest.

Almost 5.5 million people were eligible to vote on Sunday at roughly 15,000 polling stations. The results are not expected for several days.

Twelve candidates are vying for the highest office, but only the incumbent, Alpha Conde, and Cellou Dalein Diallo, the leader of main opposition party Union of Democratic Forces of Guinea (UFDG), are said to be in with a chance of victory.

Conde, 82, is seeking a controversial third term after pushing through a revamped constitution earlier this year that critics denounced as a plot to sidestep a two-term limit on presidential mandates.

The new constitution was overwhelmingly supported by voters in a March 22 referendum that was boycotted by the opposition. The result means Conde could potentially now remain the country’s president for 12 more years. Mass demonstrations against the proposed changes were met with a harsh crackdown by security forces, leaving dozens of people dead.

There have been fears that recent tensions have taken on an ethnic dimension, with Conde accused of exploiting divisions during the campaign – a charge he denies. Guinea’s politics are mainly drawn along ethnic lines: the president’s base is mostly from the ethnic Malinke community and Diallo’s from the Fulani people.

Police on Sunday were out in force in the capital, Conakry, following clashes between rival supporters in recent days, but voting appeared calm.

Speaking to Al Jazeera from Conakry, Patrice Vahard, spokesman for the Office of the United Nations High Commissioner for Human Rights, cited inclusiveness, hate speech and electoral violence as the main concerns in the lead-up to the vote

“Today was relatively calm,” Vahard said, adding, however, that “the period from the moment the polling stations close to the announcement of the final result by the constitutional court is going to be extremely critical”.

“It will be critical to keep an close eye on what happens in the coming 72 hours or so,” he said.

“God will save us, inshallah,” he told AFP news agency, adding that Guineans “want peace, not a fight”.

Earlier, Security Minister Albert Damantang Camara told AFP there had been “no major incidents”, although his ministry said “hooligans” had attacked security forces in the capital.

At a news conference, Diallo, 68, urged his supporters to “show restraint”.

“I have no doubts about the outcome of the election, which is why I do not want violence to disrupt the ballot and jeopardise my victory,” he said, adding that he thought Conde may nonetheless “cheat”.

For his part, Conde, who has been in power since 2010, said after voting at a primary school in Conakry: “Guinea cannot develop if there is no peace, security and unity. We do not want violence.

“Those who want to challenge the results must do so within a legal framework, with recourse to the Constitutional Court,” he added, dressed in white and flanked by bodyguards. 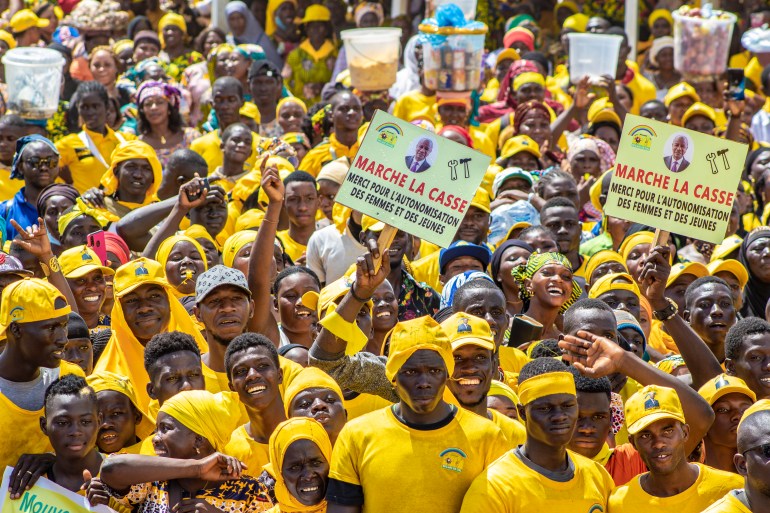 Almost 5.5 million registered voters are able to cast their vote at roughly 15,000 polling stations [Papa Seck/EPA]Meanwhile, a number of people including one of the candidates said they had been turned away at polling stations because of problems with their voter cards.

Presidential hopeful Makale Camara, a former foreign ministerm said she herself had not received a voter card at all, and so had been unable to vote.

“That’s totally unacceptable because there are people who ended up with three or four cards,” she told Reuters news agency. “It’s a holy mess they’ve organised there. If there can be ‘fictitious’ citizens, a candidate cannot be fictitious.”

In response to Reuters’ question about potential voting irregularities, an election commission spokesman said: “Only cards distributed over the last 30 days are valid.”

Conde has already won against Diallo twice before, in 2010 and 2015, and political analysts predict he will win another five-year term.

During a heated campaign, Conde, who has described the constitutional reform that allowed him to run again as fair and democratic, said he needed more time to finish major mining and infrastructure projects.

Diallo, who was at the forefront of protests against Conde’s third term, told supporters he wanted to turn the page on “10 years of lies” and criticised police repression, corruption, youth unemployment and poverty.

Tags: close in Guinea’s tense, Polls
You may also like
Recent News: