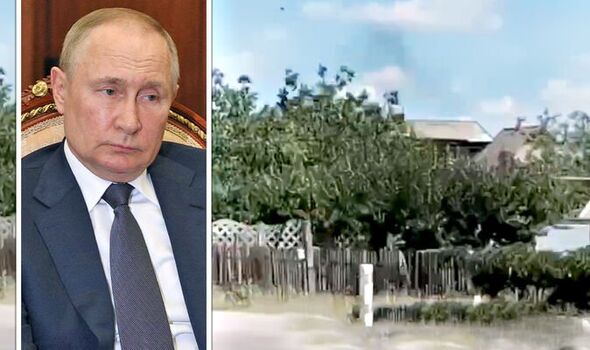 Website Ukrainian News reports the mayor of Melitopol Ivan Fedorov as saying explosions followed by fire have been seen and heard at the site captured by Russian Forces. Mr Fedorov is quoted as adding: “It was there that the Rashists transported their military equipment after a week ago. The Armed Forces of Ukraine launched devastating attacks on a Russian base near the airfield in Melitopol.” “Rashist” is a term used to describe the ideology of Russian President Vladimir Putin’s regime.

Media outlet Ukrainska Pravda reports Mr Fedorov as saying: “According to local residents, the base of the military unit of the State Emergency Service of Ukraine in the village of Myrne, Melitopol district, which had been seized by the occupiers, is on fire.”

“It was there that the Russians moved their military equipment after the Armed Forces of Ukraine launched devastating strikes on a Russian base near the airfield in Melitopol a week ago.”

Locals near the settlement of Myrne reportedly heard about 25 explosions, according to Ukrainian media. Thick black smoke has been billowing from the base, according to RIA Melitopol.

It has also been reported ammunition can be heard detonating and firing off in the direction of the city of Zaporizhzhia. Locals also report hearing bursts of machine-gun fire near the military unit in Melitopol.

Ukrainian media reports a number of explosions rocking Russian-occupied territory, including claims of an explosion at a railway station and at an ammunition depot in Donetsk.

There are also claims of two explosions in Mariupol and at a second ammunition depot in occupied Nova Kakhovka in the Kherson region.  According to Ukraine, the strike killed 52 Russians. It came after Washington supplied Ukraine with HIMARS mobile artillery systems which Kyiv says its forces are using with ever greater efficacy.

A Russian-installed official in Kherson gave a different version, saying at least seven people were killed with civilians and public infrastructure hit.

It comes after Ukrainian News reported on July 3 that the Armed Forces of Ukraine destroyed one of four Russian military bases in Melitopol in an offensive which saw more than 30 attacks on Putin’s forces.

Express.co.uk has not been able to independently verify any of these reports.

READ MORE ABOUT GRITTERS USED TO SAVE MELTING ROADS

The town of Melitopol in southeast Ukraine was one of the first to fall to Russian forces after Putin launched his invasion on February 24.

On Monday, occupation authorities in Zaporizhzhia reported Andrei Siguta, the Russian-installed district head of Melitopol, had escaped an attempt on his life by a saboteur shooting at his house.

Vladimir Rogov, a senior member of the Russian-appointed civil-military administration of Zaporizhzhia province, said on his Telegram channel the would-be assassin was killed in a shootout.

It was also reported on Monday that a Russian-appointed administrator of a small town in the Russian-occupied east of Ukraine’s Kharkiv region was killed by a car bomb presumed to be the work of Ukrainian saboteurs, according to Russia’s TASS news agency.

While Moscow says it wants to wrest the eastern Ukrainian provinces of Luhansk and Donetsk from Kyiv’s control, it shows no sign of wanting to relinquish other territories it has seized since invading its neighbour.

Alongside parts of the Kharkiv region in the east, Russian forces have also captured swathes of the southern Ukrainian provinces of Kherson and Zaporizhzhia.

A senior official in the Russian-installed Kherson regional administration was killed by a bomb on June 24, according to the deputy head of the administration.

The head of Ukrainian military intelligence declined to comment on partisan resistance efforts in occupied territories, but told Reuters news agency “those people who betrayed Ukraine and all those wretches who came here to destroy our country will be destroyed”.

It comes as the UN human rights office (OHCHR) said on Tuesday (July 12) more than 5,000 civilians had been killed in Ukraine since Russia invaded, warning the real toll was likely to be much higher.

OHCHR, which has dozens of human rights monitors in the country, said in its weekly update 5,024 people had been killed and 6,520 injured.

Kyiv says it is planning to retake territory in southern Ukraine in a counter-offensive using hundreds of thousands of troops.

The area is of strategic importance because of its Black Sea access, its having a once thriving agricultural industry and its position just north of Russian-annexed Crimea.

Ukrainian government officials have spoken of efforts to marshal up to one million troops and of their aim to recapture southern parts of the country under Russian control.

Russia has accused Ukraine of shelling its own people in territory it has lost control of. Kyiv says it evacuates as many people as possible from areas seized by Russian forces in what it and the West have cast as an attempted, imperial-style land grab by Putin.

Kyiv and the West say Russia’s own strikes have been indiscriminate, killing civilians and levelling city districts.

The Kremlin denies targeting civilians, but many Ukrainian settlements have been left in ruins as Europe’s biggest conflict since World War Two grinds towards the five month mark.