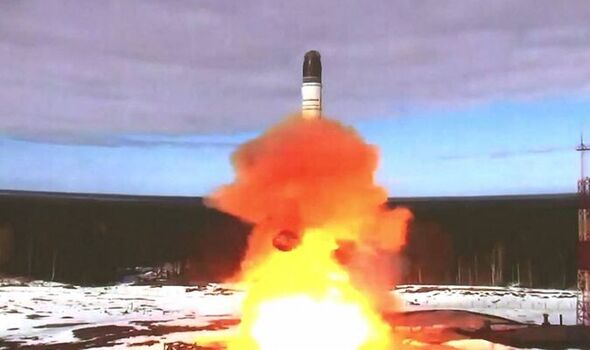 President Vladimir Putin claimed the hypersonic addition to his nuclear arsenal had no rivals and could breach any missile defence system.

The desperate despot said the weapon would ensure Russia’s security and make “those fierce people who are trying to threaten it” think twice.

The Sarmat ICBM 208-ton intercontinental ballistic missile – known in the West as Satan 2 – was seen in footage emerging with flames and smoke from a silo in Plesetsk, northern Russia.

Russian defence ministry said it was fired at 3.12pm Moscow time (12.12pm GMT) and hit targets in Kamchatka in the Pacific, nearly 3,700 miles away.

The timing of the test-launch comes at a moment of extreme geopolitical tension as the war in Ukraine entered its ninth week.

Putin said: “It can break through all modern anti-missile defences. There is nothing like this in the world, and won’t be for a long while.

“It will reliably secure Russia from external threats, and will force those who is trying to threaten our country in the heat of frenzied aggressive rhetoric.”

The 15,880mph nuclear-capable weapon can deliver 10 or more warheads on each missile.

It came as Moscow’s troops were close to fully seizing Mariupol with Ukrainian soldiers and residents holed up in a steel plant pleading for help.

More than 1,000 civilians are hiding in the Azovstal iron and steelworks.

In a video on Twitter, he said: “This could be the last appeal of our lives. We are probably facing our last days, if not hours. The enemy is outnumbering us 10 to one. They have the advantage in the air, in artillery, in their forces on land, in equipment and in tanks.

“All of us – Mariupol military battalion, more than 500 wounded and hundreds of civilians including women and children – we plead to take us to safety on the territory of a third party state.”

Located in the south-east, Mariupol has been battered by Russian forces with authorities reporting up to 22,000 civilians have died. More than 90 per cent of the city has been damaged.

Yesterday Ukraine’s Deputy Prime Minister Iryna Vereshchuk announced that an agreement has been made with Moscow allowing some women, children and elderly civilians to be evacuated.

But the invaders have been accused of breaking agreed humanitarian corridors since the war began.

Global affairs analyst Michael Bociurkiw said: “The capture of Mariupol is a centrepiece of Russia’s strategy to create a land bridge linking illegally seized Crimea with the Russian mainland.

“It is symbolically important for Mr Putin.”

Russian forces have reportedly seized Kreminna, a town of more than 18,000 people in the Donbas region, the first in its assault on eastern Ukraine. Serhiy Gaidai, the Governor of the Luhansk region, said Russian attacks “came from all sides”.

Despite a 300 mile wide offensive, Oleksiy Arestovych, an adviser to President Volodymyr Zelensky, insisted the battle in Donbas “will not go in Russia’s favour”.

The UK, the US and allies have promised Ukraine more artillery.