Vladimir Putin is facing a huge defeat in the nearly encircled city of Lyman in eastern Ukraine. Kyiv’s forces are encircling the city, if they haven’t already, which is believed to be occupied by the remnants of the 144th Motor Rifle Division. Analysts have predicted the city’s fall which could open up the fight for Ukrainian forces pushing into Luhansk. The news comes as Putin attempts to illegally annex chunks of Ukraine into total Russian control.

The capture of the town in northern Donetsk could lead to Ukrainian gains in Luhansk – together the oblasts make up the eastern industrial region known as the Donbas.

Ukrainian journalist for The Kyiv Independent Illia Ponomarenko said in a tweet that the Russian forces could already be encircled in the city.

He said: “A Russian collapse in the Lyman-Yampil sector is almost imminent now. The pocket is about to be closed off if this is not the case yet. Russians need to leave before it’s too late, but now it would be hard as Ukraine can target their withdrawal route.”

Franz-Stefan Gady, a senior fellow at International Institute for Strategic Studies, echoed the comments. He claims – citing Russian military bloggers – that the last road out of Lyman is already within range of Ukrainian artillery.

This would leave the remnants of at least part of the 144th Motor Rifle Division trapped in in the city. It’s unclear how many Russian soldiers and pro-Russian soldiers are defending Lyman. 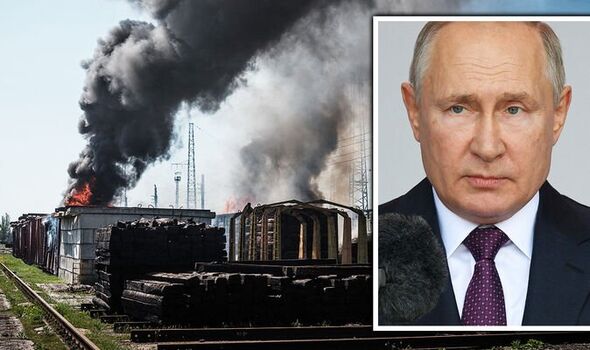 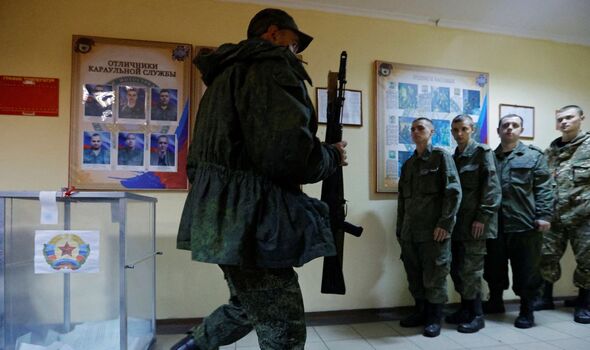 The Institute for the Study of War also said Russian forces may face “imminent defeat” in the region.

It added: “The collapse of the Lyman pocket will likely be highly consequential to the Russian grouping in northern Donetsk and western Luhansk oblasts and may allow Ukrainian troops to threaten Russian positions along the western Luhansk Oblast border and in the Severodonetsk-Lysychansk area.”

Lyman serves as a transport and logistics hub for Russian forces fighting in Donetsk’s north and would be a crucial victory for Kyiv which liberated thousands of square miles of Russian occupied territory in Kharkiv Oblast earlier this month. 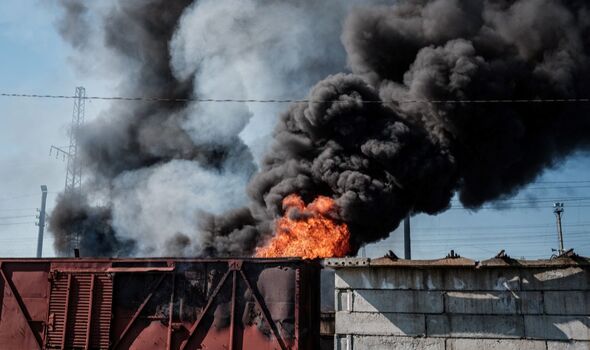 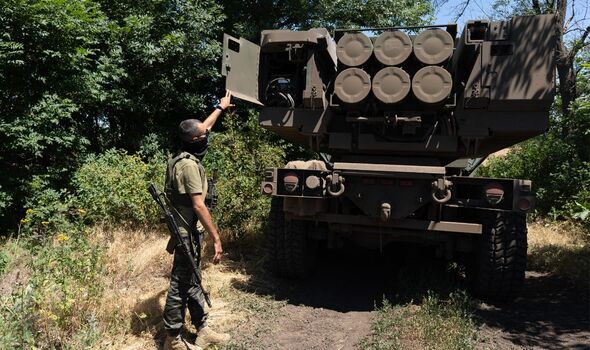 Speaking to Reuters, Konrad Muzyka, director of the Rochan military consultancy in Poland, said: “The Russians are trying to delay the Ukrainian actions as much as possible so that they can create or upgrade their line of defence between Severodonetsk and the border with Russia.”

Severodonetsk and Lysychansk saw heavy fighting in May and June as Russian forces captured Luhansk Oblast. A front opening there would be hugely embarrassing for Putin and highlights how far and how quickly Ukraine has pushed back Russian forces.

Exiled Luhansk Governor Serhiy Haidai said earlier this week: “When the situation around Lyman is resolved, then we can closely watch the actions of the Ukrainian army because Lyman is close to the river and on the other bank begins Luhansk region.”

Ukraine is pushing further into regions which are set to be illegally annexed by Russia, as early as tomorrow. Ukraine and its Western allies have said the annexation will make no difference to the situation on the ground. 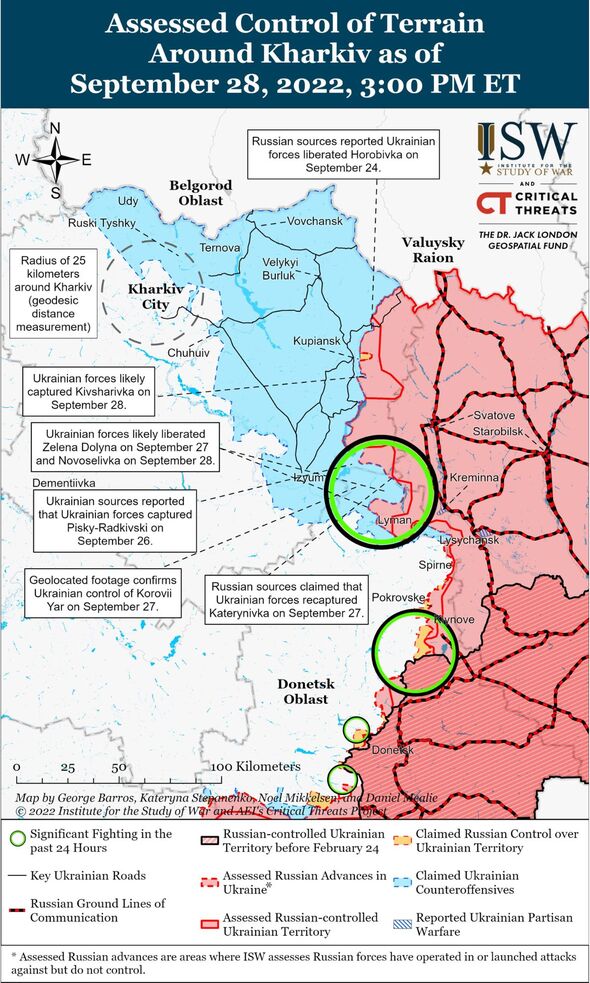 However, Putin and his allies have said Moscow will defend these territories as if they were part of Russia. They have even threated the use of nuclear weapons in Ukraine or against the West.

Putin is expected to announce the annexation as early as tomorrow, September 30. However, his forces do not control any of the four regions – Luhansk, Donetsk, Zaporizhzhia and Kherson – in their entirety.

Seth Jones of the Centre for Security and International Studies think tank in Washington told Reuters the fall of Lyman would highlight “the disconnect in the Kremlin between fantasy and reality”.

He said: “Putin is attempting to solidify control of areas he is actually losing through the sham referendums. The fall of Lyman would also deal yet another blow to Putin’s objective of seizing all of the Donbas.”