A research initiative on radon levels in Halifax homes in 2019 showed half of the 76 homes tested had a high concentration of the gas, either at or exceeding limits set by Health Canada.

Radon is a naturally occurring radioactive gas that “you cannot see, smell or taste and can get into your home undetected,” according to Health Canada.

Exposure to the gas is the leading cause of lung cancer in non-smokers in Canada.

Testing kits were sent to municipalities in the country where regular radon testing was lacking. Seventy-six homes in Halifax participated in the challenge last winter.

According to the report released last month, 37 per cent of Halifax homes tested higher than the recommended level.

Fourteen per cent of Halifax homes tested had radon levels between 100-200 Becquerel per cubic metre, and 47 per cent were under 100.

The Nova Scotia Lung Association says almost 1-in-10 homes in the province will have above the 200 Becquerel per cubic metre recommended levels, but testing is rarely done.

Spokesperson Michelle Dobson says that’s something the association has been advocating for.

Approximately 16 per cent of all lung cancers in the country can be attributed to radon gas exposure, Dobson says.

“It equates to about 700 plus people in Nova Scotia that would die of lung cancer caused by radon gas,” she says.

“We as a health lung health organization just don’t think that’s acceptable. It’s something that people can test their homes for.”

The gas typically accumulates in lower levels, like basements.

It’s released by the breakdown of uranium in soil, rock and water. The gas then enters a home through wall joints, cracks or flaws in foundation walls, floor drains or exposed soil in crawlspaces. 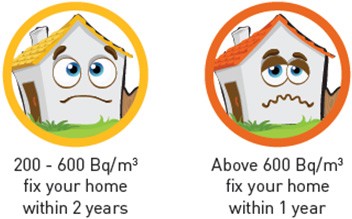 “The higher the radon concentrations, the sooner action should be taken to reduce levels to as low as practically possible,” the website says.

The provincial Department of Energy and Mines has created a map of Nova Scotia that indicates where people are more likely to be exposed to radon in indoor air. Darker colours indicate higher risk.

The Nova Scotia Lung Association has a program with libraries across the province where people can borrow short-term radon detectors, says Dobson.

But, they don’t replace long-term testing that’s recommended to residents who may be at higher risk. “It is to educate people, and at least give them a picture in time of what their radon levels could look like,” Dobson says.

Dobson says if someone detects higher levels in their home, the costs to mitigate run around $1,500-2,000 in the province. The costs of not doing it, however, could be much higher.

She says the association is currently running a program to test daycares for radon and works continuously to educate on the risks of not testing.

This winter, another 100 Randon Test Kit Challenge will take place with 15 communities across the country.

A news release by Take Action on Randon says it is important that Canadians know they can control their risk from radon.

Pierre Dubois, who was recently diagnosed with lung cancer, said in the release that radon is a bit like COVID-19. “The only way to know if you have it is by testing.”