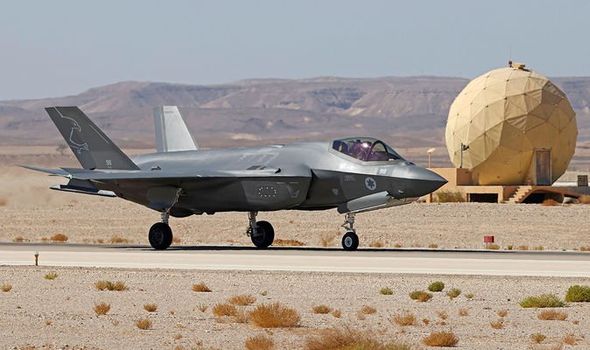 It follows a deepening of UK-Israeli relations which culminated in the signing of a 10-year trade and defence pact last month. Mark Regev, Israel’s ambassador to London until last year, said: “I witnessed a consistent upgrading of the defence relationship during my time in London, which began in 2016.

“We already had a positive relationship, and have always co-operated in the intelligence and cyber spheres. But I saw an extension of the areas where we co-operate.

Radical Islamist terrorism and the threat posed by Iran’s regional and nuclear ambition form the nucleus of the mutual concern.

Other joint projects will extend to cyber technology and anti-drone capabilities.

Like the RAF, the IAF uses F-35 fighter jets. Sharing techniques used in raids will form the core of a training exercise between both air forces which is planned to take place over the Negev desert in southern Israel next year.

An RAF source said: “Both air forces are forging stronger ties. An invitation for a joint exercise has been extended.

“Israel has combat experience with the F-35, the lessons of which are invaluable to the RAF and which it is willing to share. We are keen, though we are just awaiting government approval.”

Mr Regev, whose father’s life was saved in the Second World War when an RAF raid in Germany allowed him to escape the Nazis, insisted: “Closer co-operation between our countries makes both more secure.

“And this co-operation gives us access to a respected partner ‑ a serious country with a serious national security and defence structure.”