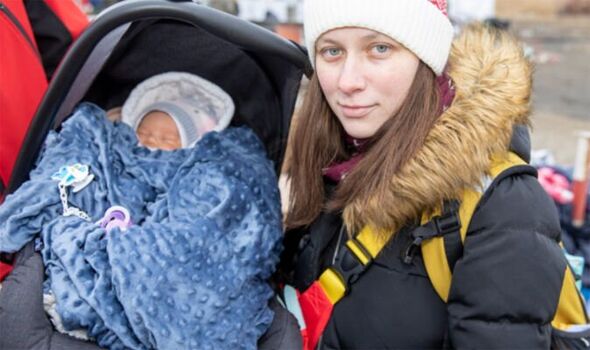 Yesterday the exhausted mother, still in pain from giving birth, crossed into Poland with her eight-day-old daughter after a gruelling bus ride through the conflict-ravaged country. Nina Zhurova endured freezing conditions as she made a dramatic dash for the border amid fears of her home being bombed or even a “nuclear disaster”. But safe from the fighting, she revealed: “Now I have some hope.”

The UN warns Europe is facing its biggest refugee crisis since the Second World War as more than 1.5 million people have fled Ukraine.

The plight of the innocent victims of Vladimir Putin’s barbaric assault on the country were laid bare yesterday in the stories of terrified women and children.

Many told how their hopes and dreams had been shattered by the Russian invasion, with others weeping as they waited to be placed in a shelter.

Temperatures fell to freezing as paramedics desperately scrambled to wrap people in blankets.

Volunteers served hot food and drinks to the women and children as they tried to work out where they will go next.

Speaking moments after crossing into Poland, Nina said: “We came by car. There was a line of cars waiting on the other side. They didn’t want to let the car through. My husband just wanted to leave us at the border, as close as possible.

“But people were throwing themselves in front of the car to not give it a priority. But when they saw the baby, they did. The small baby meant we had priority.”

“The worst thing is I gave birth to my child in the basement of the hospital. That was the most terrible thing. But now I have some hope. Things have been arranged for us to come here.”

The Ministry of Defence has warned Vladimir Putin is launching increasingly brutal assaults on Ukraine’s civilians because his military assault has fallen into disarray.

But with more artillery attacks, air raids and reckless attacks – such as the shelling of the nuclear plant at Zaporizhzhia – ordinary families are fearing that they are more likely to be killed.

Nina said: “I was most worried that my child would have no future at all, either that the bombs would go down or there would be a nuclear disaster.

“I cannot speak to my husband as I need a special card for my phone so I can call Ukraine.” The UN Refugee Agency yesterday revealed that more than 1.5 million people have fled Ukraine since the invasion began on February 24.

On Saturday alone, 195,781 people left the country. The Polish authorities said that nearly a million refugees — 922,400 people — have fled to their country, with a further 40,000 arriving yesterday morning.

More than 250,000 have fled to neighbouring Moldova, a country of only 2.5 million residents, as the numbers of displaced people are swelled by refugees escaping from the Russian attacks on besieged cities such as Mariupol.

Laora Asdaeva, 43, from Dnipro, explained: “I had to leave. Nobody knows what will happen next. It was scary.”

“One moment, we had a normal life. We had plans, we had things to do. And then the next moment the war came to our country. I was shocked. I would like to be able to go back – we had a house. It was our home. I do not know where we will go next.”

Ms Asdaeva said she had travelled for two days by train with her children – Constantine, two, and Margarita, eight months.

She added: “It was really so horrific. We stayed in the same place for 18 hours. The journey was so hard.

“The bags were so heavy. We have only the most necessary things. We had to hold our children and our babies on our knees. There were lots of people standing up.

“We had one seat between us. We would change who was standing up. “My children are too little to understand what is happening. I think that is a good thing.”

“The children who are slightly older are crying all the time. They will all remember this.”

Mother-of-one Irina Kolyada revealed how she had fled from the north-eastern city of Kharkiv with her daughter Kata, three, as Putin’s barbaric forces targeted the area with their deadly cluster munitions and artillery fire.

She said: “We stayed at home for two days. Then we lived in the subway for four days.

“During these days, all the parks, zoos and state institutions were blown up in the city.

“And they opened fire on the houses. We were scared every day because there would be an alarm about an airstrike and immediately there were explosions in the city.

“I am very scared for my daughter. I am hoping they’ll give me a job in Poland. I travelled across all of Ukraine.”

“Now we are all very scared. But the world is not without good people. Everyone is trying to help each other.”