Ukraine: Farmers throw away vegetables due to export blockade

At crisis talks held in Istanbul, Turkey, they agreed on joint controls for checking cargo at harbours. 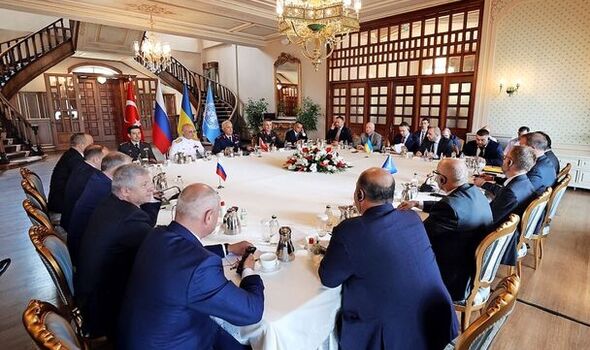 Turkey, which mediated the meeting with United Nations officials, has offered to provide safe Black Sea corridors. The country’s defence minister, Hulusi Akar, said an agreement would be signed next week when the parties met again.

UN secretary-general Antonio Guterres called the progress “an important and substantive step, a step on the way to comprehensive agreement.” But he warned that more “technical work” would be needed to make the deal a reality.

Ukraine says the Kremlin’s Black Sea ports blockade means up to 25 million tons of its grain are going nowhere. The UN has warned it is causing a global food emergency, particularly in Third World countries.

The exports are also hampered by sea mines laid by both Ukraine to avert an amphibious assault, and the Russian navy to stop ships leaving. It is hoped a lasting deal can be struck to resume safe grain exports from Odesa. More than 130 Ukrainian ships are waiting in the Black Sea to reach Romania from where supplies can be sent around the world.

But there is growing suspicion Moscow is trying to export grain it stole from Ukrainian farmers in areas it controls.

Nato member Turkey has been using its good relations with the Kremlin and Western-backed leaders in Kyiv to try to broker a deal.

It says it has 20 merchant ships that could be loaded quickly and sent to world markets. Both Ukraine and Russia are major wheat suppliers. Russia is also a large fertiliser exporter and Ukraine a significant producer of corn and sunflower oil.

Boris Johnson said “alternative routes” would be explored if Russia continued to block the sea option.

The Prime Minister said there was no plan to break rules restricting warship movement through the Turkish Straits.

But he added: “We may have to prepare for a solution that does not depend upon Russian consent because it may not be forthcoming.”