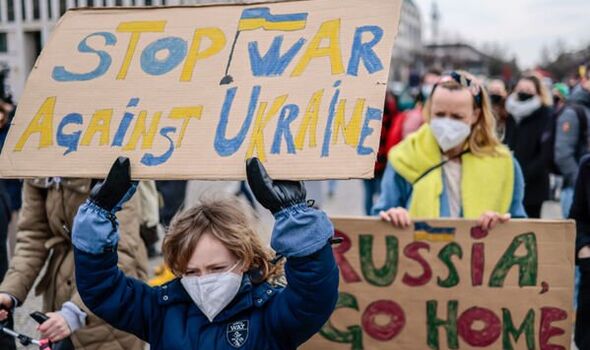 The event is usually the first in a number of daily parades of brightly-coloured floats making fun of Germany’s leading politicians. But organisers changed their targets to Kremlin tyrant Vladimir Putin and his Belarusian puppet Alexander Lukashenko. In Sri Lanka, meanwhile, about 150 Ukrainian tourists staged a demo outside the Russian Embassy in Colombo.

They waved balloons in their country’s now-familiar national colours and held up handwritten posters protesting about the war. In London, protestors were due to gather in Trafalgar Square yesterday evening for their fifth demonstration on consecutive days.

The protests follow spectacular weekend gatherings across the world including a crowd of 100,000 in the German capital Berlin.

Spanish protestors in Madrid compared Putin to Adolf Hitler and in Greece, the anti-war crowds gathered at central Syntagma square, Athens. The Russian embassy in the South Korean capital Seoul and the United Nations office in Erbil, northern Iraq, meanwhile were also targeted by protestors.

Across America, the blue and yellow army were out in force outside the White House and in provincial cities like Boston and Chicago.

In Chicago, Liliya Galko, 32, vented her feelings outside Saints Volodymyr and Olha Ukrainian Catholic Church. The nurse said: “My family is out there. They’re fighting, they don’t want to evacuate. For us, it feels like there’s nothing we can do. Right now, it’s just raising awareness and donating money.”

But in Russia, police rounded up and arrested anti-war demonstrators in St Petersburg and 32 other cities.