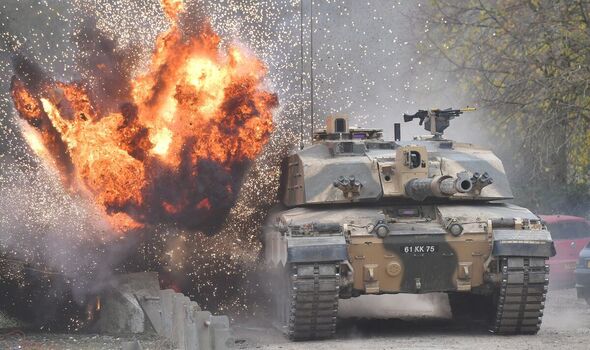 The claim came a day after Defence Secretary Ben Wallace announced details of the UK’s additional support for Kyiv. It includes 14 Challenger 2 tanks and 30 AS90 self-propelled guns. Referring to the British armour, a Kremlin spokesman said: “These tanks are burning and will burn.”

Prime Minister Rishi Sunak’s spokesman hit back: “We have seen very clearly that the Ukrainian armed forces have been very effective with the equipment that we have provided to them.”

He added: “We are confident they will do so again.”

But the head of the British Army last night warned sending tanks and artillery to Ukraine will leave our forces “temporarily weaker” until they are replaced.

Sir Patrick Sanders said Ukraine “needs our tanks and guns now” and will put them to “good use”.

In a clear message to Chancellor Jeremy Hunt and the Treasury, the general said it was vital the Army’s fighting capability was restored and modernised at pace.

A missile that hit a block of flats killed at least 40 people, including three children, and injured 75.

Around 30 are still missing and local officials say there is little chance of any being found alive.

Speaking in Russian, Ukraine’s president said he wanted to address those “who even now could not utter a few words of condemnation of this terror”. He added: “Your cowardly silence, your attempt to ‘wait out’ what is happening, will only end with the fact that one day these same terrorists will come for you.”

Other cities including Kyiv, Kharkiv and Odesa, were also hit.

Russian President Vladimir Putin insisted “everything is developing within the framework of the plan of the ministry of defence and the general staff”.

Yesterday, Moscow’s ally Belarus began joint air force drills with Russia. There are concerns it is considering joining the war.