A strip of land close to Ukraine’s second-largest nuclear power plant came under fierce Russian missile attack in the early hours of Monday morning. Moscow’s troops are understood to have used long-range missiles to target the Mykolaiv region, with one strike sparking a huge blast just 300 metres from the Pivdennoukrainsk nuclear power plant. The attack has reignited concern over Russia’s actions close to the even larger Zaporizhzhia power plant in the south east of Ukraine. The Kremlin’s military has edged closer to weaponising domestic nuclear facilities as attacks near the power plants risk causing a devastating radiation disaster.

Footage released by the Ukrainian Ministry of Defence captured the terrifying moment the Russian missile made impact in Mykolaiv.

The video clip, which offers a high vantage point above several other buildings, appears to have been captured as part of a CCTV recording. A running clock in the top corner of the display places the strike at just after midnight local time.

Before the scene erupts in flames, a thin trail of smoke can be seen against the night sky, indicating the flight path of the missile.

Seconds later, the city bursts into a huge explosion, powerful enough to momentarily turn the entire screen white. Following the initial blast, sparks can be seen flying in all directions against the backdrop of the nuclear power plant building. 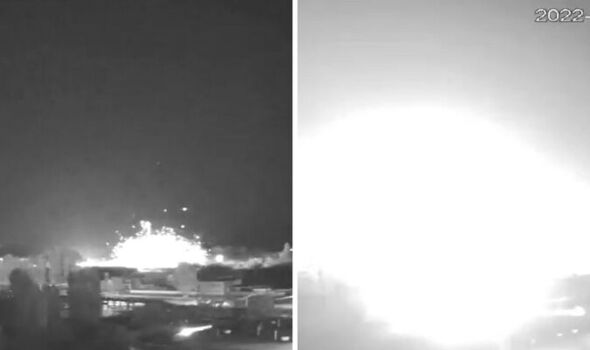 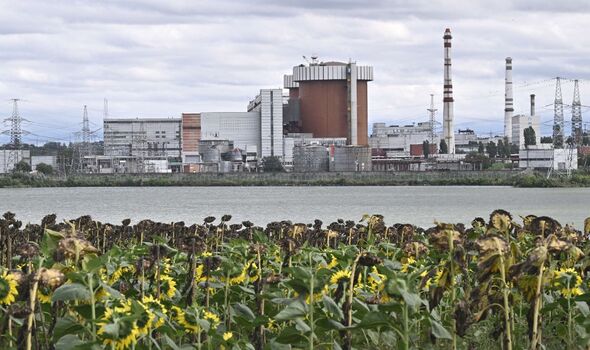 Ukrainian authorities confirmed the strike had made contact just 300 metres short of the nuclear facility. Energoatom, the Ukrainian operator of all four nuclear power stations across the country, described the strike as a “powerful explosion”.

In a statement on Telegram, the company wrote: “The shockwave damaged the nuclear power plant buildings, and over 100 windows were broken.

“One of the hydropower units of the Oleksandrivka hydro power plant, which is part of the South Ukrainian power complex, has shut down.

“Three high-voltage power lines were down as well.”

Read more: ‘Putin on back foot – Ukraine crushing Russia’s will to resist’ 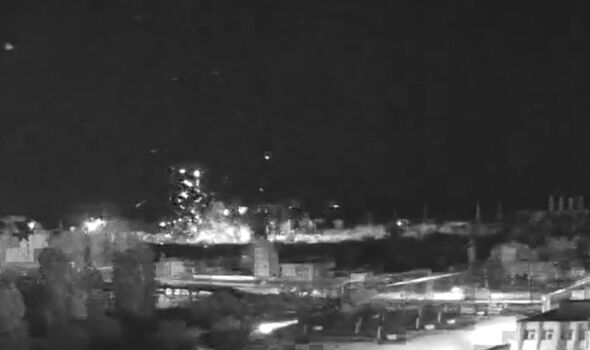 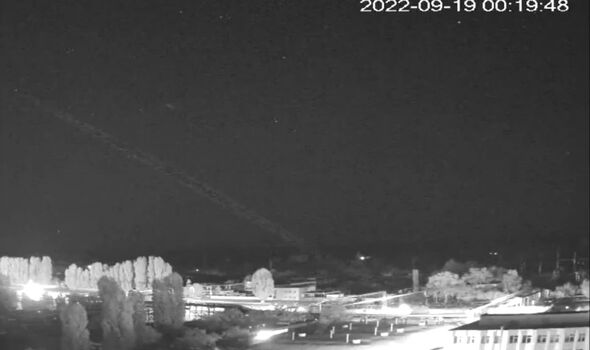 Despite the damage sustained in the attack, Energoatom reported the nuclear facility remained fully operational and confirmed no members of staff had been harmed.

Ukraine’s Energy Minister German Galushchenko wrote on Twitter: “While it is not too late and a nuclear catastrophe is only a threat, we must stop Russia.”

In an additional statement on social media, Mr Galushchenko added: “Russia is desperate to put the world on the brink of a nuclear catastrophe, just to make progress in its energy blackmail of Europe.”

Don’t miss:
UK praised for unlocking the ‘shortest route to peace’ in Ukraine [REPORT]
Putin’s Russia is seven months into its war – and he’s under pressure [ANALYSIS]
Putin ‘purging Russian military from within [INSIGHT] 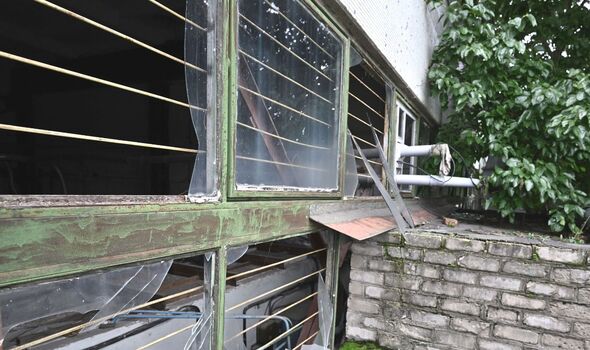 The attack in Mykolaiv comes as Russia remains in control of the Zaporizhzhia plant, Europe’s largest power station.

Shelling in the region has brought the stability of the nuclear facility into question numerous times, with the reactors entirely cut off from the national power grid at points due to missile damage.

There has been concern from conflict analysts that Russia could weaponise nuclear facilities across Ukraine by deliberately targeting the infrastructire to cause a radiation leak.

The UN has been forced to intervene in a bid to prevent nuclear disaster, sending a team of experts from the International Atomic Energy Agency to assess the plant and ensure a stable power supply can be established.

Read next:
Should UK continue to pay so much to Ukraine? VOTE
Russian soldiers leave behind mural after fleeing occupied Kupiansk
Ukrainian POW says traitors tortured him then fled to Russia
Putin humiliated as brutal Wagner mercenaries targeted by hackers
Military expert details next offensive weapons UK will send to Ukraine