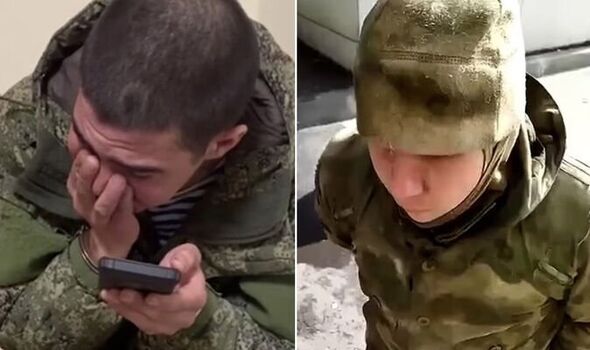 Radio messages suggest troops are refusing to obey orders to shell Ukrainian towns, and complaining about a lack of fuel and food.

Other video footage shows soldiers apparently deserting rather than attacking civilians, while in a text message, one man tells his mother he wanted to “kill himself”.

Messages intercepted by ShadowBreak International offer an insight into the dire morale of Russian armed forces ordered to invade their neighbour in the early hours of Thursday morning.

Russian military operations rely on walkie-talkies and mobile phones, both of which are simple to intercept.

In one recording, one soldier, apparently speaking from a command centre, says: “We will cover the town… with artillery fire.”

The response from the front line is that civilians need to be evacuated first, which the first man grudgingly accepts.

In another message, a soldier is heard railing against a shortage of fuel supplies, saying: “We’ve been here for three days. When the hell is it going to be ready?”

He said: “What we have found is that the Russian operatives are operating in complete disarray.

“They have no clue where they are going and how to really communicate with each other properly.”

He added: “It’s basically like tapping into a police frequency in the US.

“Through the hours of recordings we have over multiple frequencies, you will be able to hear fighter jets, helicopters, tanks, artillery, heavy ballistic missiles talking analogue because not all the units have digital communication methods. It’s such a huge vulnerability coming from Russia in such an operation. It’s insane.”

The tapes also offered proof Russia was guilty of “war crimes”, he claimed, given the orders to fire ballistic missiles into urban areas.

Mr Cardillo said: “There were periods where we heard them crying in combat, a period where they were insulting each other – obviously not a sign of great morale.

Other intercepted messages have offered further evidence of the con-trick which Putin has apparently played on his armed forces.

Sergiy Kyslytsya, Ukraine’s envoy to the United Nations, read out one text on Monday in which a soldier complained to his mother: “We were told we would be greeted with open arms but they call us fascists.

“The only thing I want right now is to kill myself.

“Mum, I’m in Ukraine. This is a real war. I’m scared, we’re firing at everyone, even civilians.”

Another video shows Russian troops apparently walking back across the Russian border in the Sumska region.

A local man is heard to ask: “Are you leaving us?” with one of the soldiers replying: “We’re going home.”

“That is what happens when your military leaders don’t prepare you, lie to you or deceive you and also you base a military plan based on an arrogant assumption that you are the liberator.”

Rejecting the idea that Russian deserters should be granted asylum in the West, Mr Wallace said: “I take the view that the best thing that Russian deserters can do is go back to Russia, tell the Russian people they are being deceived, tell the Russian people that their military leaders are causing huge amounts of unnecessary suffering and losses because of either incompetence or arrogance, and they can go back and tell the mothers, who are wondering where their thousands of disappeared sons are.”