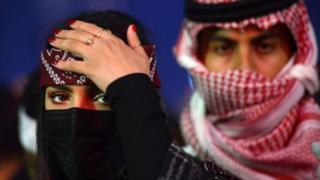 A man who stabbed at least three Spanish dancers in Saudi Arabia during a live performance has been executed.

The assault on the theatre group took place during a festival in the capital Riyadh in November.

The attack happened on 11 November when a man stormed the stage in King Abdullah Park in Riyadh and stabbed members of the theatre group.

A special court that tries terrorism cases found al-Mansouri guilty of multiple charges, including acting on the orders of a senior al-Qaeda leader in Yemen.

He was put to death on Thursday in Riyadh, the interior ministry said in a statement.

Al-Qaeda have not said that they carried out the attack.

A second man was sentenced by the Specialised Criminal Court to 12.5 years in prison.

Saudi authorities claimed al-Mansouri filmed a video of himself railing against the country’s newly-founded Entertainment Authority, which spread on social media.

Crown Prince Mohammed Bin Salman promised a programme of modernising reforms called Vision 2030 when he was appointed in 2017.

Decades-old bans on cinemas and mixed-gender concerts were lifted, and women are now permitted to attend football matches.

Billions of dollars were promised to develop an entertainment industry, and international acts including K-Pop, Cirque du Soleil and Mariah Carey have performed there.

But reforms have stalled amid the arrest of women’s rights activists and scandal about the killing of journalist Jamal Khashoggi in 2018 in the Saudi embassy in Istanbul, Turkey.

In February a Saudi rapper was reportedly arrested after releasing a video to her song Mecca Girl.

Saudi authorities say the November attack was the first since the reform programme was announced.

Tags: Arabia, dance, executes, SAUDI, TR
You may also like
Recent News:
This website uses cookies to improve your user experience and to provide you with advertisements that are relevant to your interests. By continuing to browse the site you are agreeing to our use of cookies.Ok