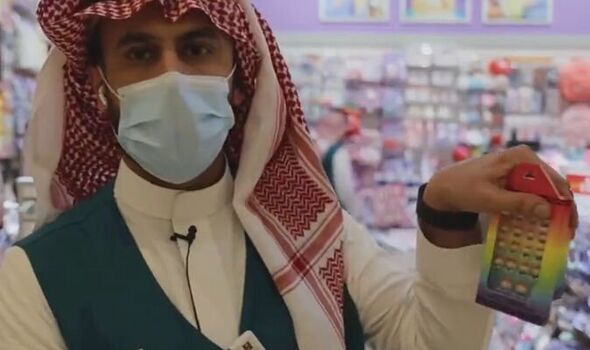 In a report by state television network Al-Ekhbariya, a commerce ministry official is seen entering a shop in Riyadh, the Saudi capital. He goes on to remove a range of items from the displays, including hair clips, t-shirts, hats and pencil cases.

According to a BBC translation, one official said the items “contradict the Islamic faith and public morals”, and “promote homosexual colours targeting the younger generation”.

The Ministry of Commerce said separately a “supervisory team” carries out inspections of sales outlets in order to seize and confiscate products that fell foul of their beliefs.

It said the team takes products off shelves that “contain symbols and indications” which “contradict normal common sense”.

Saudi Arabia has no laws regarding sexual orientation or gender identity, but sexual relations outside of marriage – including homosexual relationships, which it deems cannot be married – are strictly forbidden.

Under the nation’s interpretation of Sharia law, consensual same-sex intercourse could be punishable by flogging or even death depending on how serious the legal system deems the case.

In the report, a journalist describes a rainbow flag as a “homosexuality flag”, adding it sends a “poisoned message” to children, according to various translations.

In April, Saudi cinemas were denied reels of the new Doctor Strange movie, after producer Disney refused a request by the kingdom’s authorities to remove what they called “LGBTQ references” in the film.

Saudi media regulators reportedly objected to a 12-second scene in which one character refers to her “two mums”.

An official suggested the Government there was attempting to work with Disney but the film ultimately failed to screen.

A source close to Disney said on Tuesday its new Pixar film, Lightyear, had also been banned in the Middle Eastern nation as it features a same-sex kiss.

The Government there has not yet officially confirmed the ban, but according to reports the two main cinema chains are not advertising the animation.

The United Arab Emirates’ culture ministry said it had banned Lightyear on Monday “due to its violation of the country’s media content standards”.

Another Persian Gulf neighbour of Saudi Arabia, Qatar, said in December its authorities had confiscated rainbow toys from shops for bearing “slogans” that “go against Islamic values”.