There are only a handful of these farms in the United States, most run by fishing families in Maine. But their number is growing.

Growing large sea scallops is labor intensive. Each scallop needs to be pinned individually to a line before being submerged in the water. This method, called ear-hanging, was developed in Japan and results in very high-quality bivalves.Credit…Tristan Spinski for The New York Times

STONINGTON, Maine — On a damp, cloudy morning in April, Marsden Brewer drove his 38-foot lobster boat out into the middle of Penobscot Bay. Other than a few buoys and the occasional gull, the water was calm and empty — a vast, gray expanse leading to pine-topped islands in the distance.

Mr. Brewer and his son, Bob, pulled up a long algae-covered net and scooped scallops into a bucket of seawater, where they zipped around, moving a whole lot faster than you’d think bivalves could. Most would go to Glidden Point Oyster Farms. The rest were about to become lunch.

A third-generation commercial fisherman, Mr. Brewer has witnessed firsthand the instability of the wild fisheries around him, watching the fluctuations of the lobster catch, and the once-plentiful stocks of cod, urchins and shrimp all but disappear.

“What I’ve seen over the years has not been good,” he said as he shucked a scallop, revealing its pale adductor muscle — the white disk we think of when we picture scallops — nestled against a pillow of orange roe.

“It’s made me think, maybe it’s not that there are too many fishermen, but that there’s not enough fish. So, I thought, how do we make more fish?”

Aquaculture is not the usual answer. Large-scale aquafarms can cause ecological havoc, polluting the ocean, devastating wild populations and putting even more pressure on already fragile fisheries. But there are some small-scale, sustainable exceptions suited to the skills, equipment and knowledge of traditional fishermen. Such is the case with Mr. Brewer and his sea scallops.

There are only a handful of sea scallop farms in the United States, and most are in Maine, run by fishing families who, like the Brewers, are looking for ways to diversify beyond lobster while still keeping their boats in the water. But their number is growing.

Bivalve farming (along with kelp farming) is one of the most environmentally beneficial types of aquaculture, considered a zero-input food source because it doesn’t require any arable land, fresh water or fertilizers to grow protein. You don’t even need to feed bivalves; phytoplankton already present in the sea will sustain them.

Bivalve farming also doesn’t compromise its habitat: In fact, the presence of shellfish like scallops, mussels and oysters actively improves it by filtering the water and increasing biodiversity.

Scallops may even go one step further, reinforcing the local wild scallop population, something that’s been shown to occur with oyster populations.

This hypothesis is currently being evaluated at the Hurricane Island Center for Science and Leadership in Rockland, Maine. The director of research, Phoebe Jekielek, who runs the project in collaboration with the University of Maine, offered an explanation of it.

“Sea scallops are broadcast spawners,” she said, referring to how male and female scallops release their eggs and sperm into the water and hope they meet up to fertilize. The proximity of aquaculture scallops may facilitate fertilization, increasing the number of embryos that drift out into the sea, and potentially result in more wild scallops.

And this could bolster the wild fishery, which, though carefully managed, has still had wide fluctuations in its catch (known as landings). Over the past decade, for instance, that number has gone from 34 million pounds in 2013 to over 60 million pounds in 2019 (about 2 percent of which are caught in Maine).

“The goal with scallop aquaculture is not to eliminate the wild fishery, which is very important to the economy in Maine,” Ms. Jekielek said. “It’s to create a different market that could also augment the wild supply.”

A market for farmed sea scallops could be huge — and lucrative. Scallops, unlike less expensive mussels or clams, are what Mr. Brewer calls “a big-ticket item.” They are the second-most valuable landing in the region behind lobsters, which in 2019 was worth $637 million, compared with $569 million for scallops.

And the demand keeps growing, as does the supply, coming from the American fishery and from imports. Prices are rising, too, right along with demand.

According to Dana Morse, a sea scallop specialist at Maine Sea Grant at the University of Maine, the United States imports about $300 million in scallops annually.

“The market for adductors is, if not bottomless, pretty close to it,” he said.

In terms of flavor, the farmed and wild sea scallops in Maine are identical: almost candy sweet, with a distinct briny, umami complexity. The cold, deep waters of the Gulf of Maine are particularly well suited to scallops and other shellfish, giving them an incomparably rich, saline flavor. You can have them raw, slurped right out of the shell with the roe still attached, their adductor muscles a little twitchy and as bouncy as jelly. But they’re also compelling lightly cooked, which firms them up and makes them meaty and dense.

For lunch, Mr. Brewer steamed small unshucked scallops in an old coffee pot, and dipped the tender nuts of meat in soy sauce and wasabi.

Mr. Brewer adapted this recipe from versions he saw when he visited Japan in 2016, on a research trip organized by Coastal Enterprises Incorporated (CEI), a nonprofit that supports sustainable fisheries and aquaculture in Maine. Much of the technology and methods used for Maine scallop aquaculture originated in Japan, which has been cultivating sea scallops since the 1950s.

Of course, part of the deliciousness of Mr. Brewer’s scallops came from their freshness, alive until minutes before cooking, which gives farmed scallops the edge over even the most pristine shucked wild day-boat scallops. (With few exceptions, wild scallops in the United States are shucked before they are sold to avoid possible bacterial contamination found in the viscera and the roe. Farmed scallops, whose habitat can be tested for biotoxins, are permitted to be sold live in the shell, with the roe still attached.)

The culinary possibilities of scallop roe thrill some chefs, including Angie Mar, the chef of Les Trois Chevaux restaurant in Manhattan, who dreams of putting scallops baked in a roe-spiked velouté on her menu.

“Whenever I see roe-on live scallops in places like London, Hong Kong or France, I jump to buy them,” she said. “But you don’t see many of them here.”

That is because the majority of Maine’s farmed live scallops are sold locally to restaurants and occasionally offered online.

Michael Wiley, the chef and co-owner of Eventide Oyster Company in Portland, Maine, considers himself lucky to be among those customers, getting his directly from Mr. Brewer’s scallop farm. He serves the scallops on the half shell, and also fried in brown butter to stuff into steamed buns.

Because of the labor shortage in the restaurant industry, a result of the coronavirus pandemic, Mr. Wiley said, the chefs at his restaurant hadn’t experimented with the roe. They hope to this winter, even if they aren’t quite sure about the reception they’ll get.

“Offal is a tough sell, especially seafood offal,” he said.

This, however, is not the case in much of Asia, particularly Japan, where the entire scallop is prized: adductor, roe and mantle.

Michael Uehara, chief executive of Great Bear Ocean Farms in Prince Rupert, British Columbia, sells most of his live whole sea scallops to a primarily Asian clientele, who, he says, value the viscera as well as the adductors.

“Every part of the scallop is edible,” Mr. Uehara said, “and Asian populations seek it out. We pound the mantle and use it like abalone, or dry it for snacks.”

Great Bear, which will be co-owned by the Metlakatla First Nation, is one of the largest scallop farms in North America. Before the pandemic it was producing an average of half a million scallops a year, which is not nearly enough to meet the demand. Three million scallops a year is the current goal, which Mr. Uehara says the farm is on track to meet.

One reason there aren’t more scallop farms in North America is that they require a substantial investment of money and time. Scallops need about three years to reach full size. Scallop farming is also extremely labor intensive. Each bivalve must be individually pinned to a line before being suspended in the water, a process called ear-hanging that results in particularly large, well-shaped animals with a potential wholesale price of as much as $3 each when sold live. 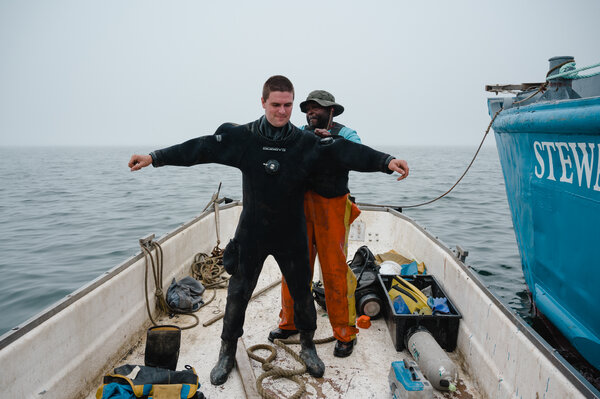 At Hollander and de Koning, a family-run mussel farm in Trenton, Maine, the de Konings recently imported one of two Japanese-manufactured ear-hanging machines in the United States, financed with a grant from the National Marine Fisheries Service. (The other machine was part of a suite of equipment brought in by CEI to support the industry.) With the machine, which they are sharing with other scallop farmers in the area, they can pin upward of 6,000 scallops a day — more than three times the number they could do by hand.

The family started growing scallops after Alex de Koning learned about them in 2009, for a high school science project. It became a passion, and now they are growing about 100,000 scallops, alongside mussels, off Mount Desert Island.

Over the next few months, they hope to be able to start selling their saucer-size beauties with adductors like jumbo marshmallows to the nation’s top restaurants. Available year-round and sold live in the shell, these can be a more reliable alternative to the diver sea scallops, which can be so hard to find.

And when they do, chefs like Eric Ripert of Le Bernardin will be ready to buy.

Where to Find Farmed Sea Scallops