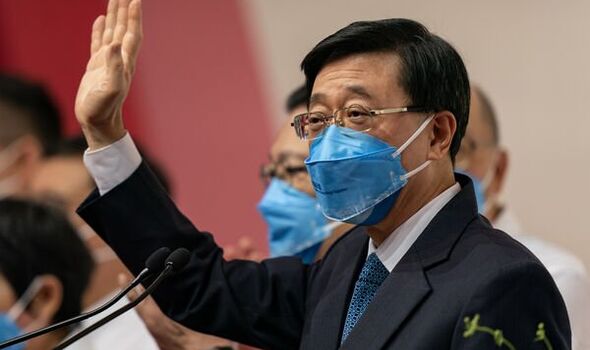 John Lee’s appointment is seen as a move by mainland Communists to tighten their grip on the city.

Known as a loyal Beijing supporter Mr Lee, 64, oversaw the sometimes violent crackdowns on prodemocracy protesters in 2019 and is deeply unpopular.

He was the only candidate to succeed outgoing leader Carrie Lam who had served since 2017.

Hong Kong’s leaders are selected by a closed-circle committee of around 1,500 members, who are nearly all pro-China loyalists. Mr Lee got 1,416 votes from the election committee’s nearly 1,500 members.

While 33 members abstained, eight voted to “not support” him.

Mr Lee, who was the former chief secretary and the city’s secondhighest ranking official, was always tipped to be the favoured replacement for Ms Lam, 64, who announced she would not seek a second term.

The ex-policeman is hated in the former British colony for his role in overseeing the crackdown on protesters during demonstrations over a controversial extradition bill in 2019.

He continued to back the law change despite the unrest and came under intense criticism for sanctioning the use of water cannons, rubber bullets, tear gas and occasionally live ammunition to disperse protesters.

After his victory Mr Lee said it was his “historic mission” to lead a new chapter for Hong Kong.

The former security chief pledged to unite the city and preserve its international status as an open and competitive financial hub.

He said: “Safeguarding our country’s sovereignty, national security and development interests, and protecting Hong Kong from internal and external threats and ensuring its stability will continue to be paramount.”