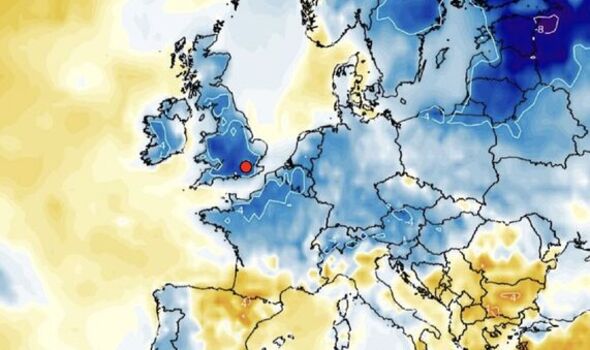 Bitter gales from Scandinavia and the Arctic circle held at bay through Easter are about to roar ‘with a vengeance’ across the nation. Temperatures this week will widely plummet to freezing and in places below with no change on the horizon this side of May.

Gardeners are warned to protect delicate plants with glorious spring weather about to give way to a winter chill.

A split jet stream with one branch to the north of the UK and the other to the south will allow high pressure close to the UK to steer winds in across the North Sea.

“One of these is to the north of the UK, and the other over the Continent, and in between is a large area of high pressure.

“This will steer winds from Scandinavia, across the North Sea into Britain bringing a return to cool, and at times, cold weather.

“This is the picture for the next week to 10 days at least.”

Britons are warned to start wrapping up with morning frosts to return during the final days of the month.

Other than the odd shower, no rain is forecast through the next 10 days as high pressure drives clear skies.

Mr Dale, author of Weather or Not? said: “One of the main features of the next week and beyond will be the lack of rain.

“This again is the result of high pressure keeping low pressure away from the UK.

“This is something gardeners and farmers may be starting to worry about at this time of year.”

Arctic air will sweep across Norway and Sweden pushing thermometers well below average for the time of year.

Swathes of the country can expect unseasonal morning frosts through the end of April and into next month.

Scotland and northern Britain are not out of the woods when it comes to the chance of a wintry flurry over high ground.

Weathertrending meteorologist John Hammond said: “Rather than turning warmer through the end of the month, we expect a cooling trend.

“North-easterly winds will blow with a vengeance across the UK bringing a fresh and blustery feel.

“Arctic air will be pushed towards us, and with clear skies and light winds, this is a recipe for overnight frosts, even as we approach May.

“I would not rule out even the novelty of a wintry shower or two drifting down from the south, although these would be confined to the higher ground of north Britain.”

The theme for the nation’s weather into the last month of spring will be chilly although some parts may catch the odd glimpse of the sun.

Cloud and gloomy skies will kick-start next week as colder air cascades down the country towards mid-week.

Daytime temperatures in parts could reach the mid-teens although the mercury will nosedive overnight.

Netweather forecaster Ian Simpson said: “There could be a fair amount of cloud over most of England on Monday and Tuesday.

“High pressure will ridge into all parts of the UK by Wednesday, and it is expected to be dry and sunny almost nationwide.

“Some colder air will be heading in from the north, so although temperatures are only forecast to fall slightly by day, still reaching around 15C over much of central and southern England, frost will develop more widely at night, particularly in the north.”

Weather models show icy winds from the north east pushing feel-like temperatures in the north to -7C this week, with lows of freezing or just above across southern Britain.