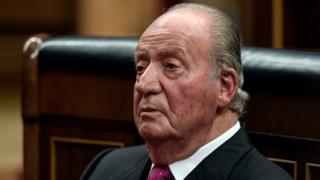 The court prosecutor’s office says it aims to establish the ex-king’s connection with the project after his abdication in June 2014. At that point he lost his immunity from prosecution.

The probe involves Swiss banks too.

Spanish anti-corruption officials suspect that the king kept some undeclared funds in Switzerland, and a Swiss investigation is under way. However, those officials are awaiting documentation from the Swiss authorities, Spain’s La Vanguardia news website reports.

“This investigation focuses, precisely, on establishing or discarding the criminal relevance of deeds that happened after June 2014,” the Spanish prosecutor’s office said.

There has been no comment so far from the ex-king himself or his lawyers.

The Spanish government said that “justice is equal for all” and it would “not interfere” in the inquiry.

In March King Felipe VI renounced his inheritance from his father Juan Carlos, who is now 82.

Preliminary inquiries were launched in September 2018, after recordings emerged of the king’s ex-mistress Corinna zu Sayn-Wittgenstein. Reports say she mentioned a commission in connection with the Saudi contract.

Juan Carlos ascended the throne in 1975 on the death of Gen Francisco Franco, the fascist dictator who ruled Spain for 36 years.

Juan Carlos was widely admired for steering Spain to democracy during a difficult period. But towards the end of his 39-year reign he drew criticism.

There was a lavish elephant hunting trip to Botswana in 2012, then a corruption scandal involving his youngest daughter, Cristina, and her husband Iñaki Urdangarin, which led to calls for him to step aside.

Tags: ex-king, over, probed, Saud, SPAIN
You may also like
Recent News:
This website uses cookies to improve your user experience and to provide you with advertisements that are relevant to your interests. By continuing to browse the site you are agreeing to our use of cookies.Ok