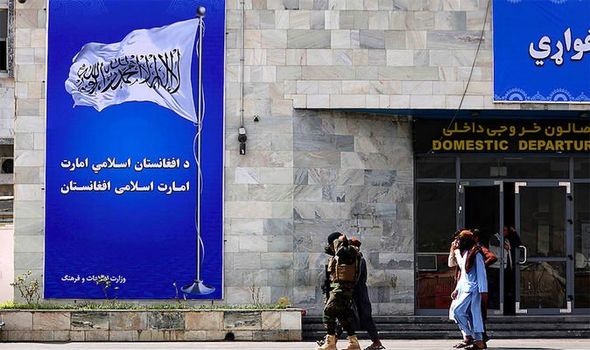 Death squads have hunted down and killed at least four Afghan counter-terrorism agents, and female protesters have apparently been shot dead after attending demonstrations against the new government.

It came as militant leaders yesterday claimed women can study at universities but they must be separated from men and wear head coverings.

The Taliban’s rise has stoked fears the group would return to the draconian rule that saw public executions, stonings, beatings and the crushing of women’s rights and educations.

On Saturday, when the world marked the anniversary of the September 11 attacks, the Taliban’s flag-raising ceremony marked the official start of the all-male government.

The white banner, emblazoned with a verse from the Koran, was hoisted by Mullah Mohammad Hassan Akhund, the prime minister of the interim government.

Elsewhere, the killings went on. Rohullah Azizi, the brother of former vice president and anti-Taliban resistance leader Amrullah Saleh, was travelling in his car on Thursday when he and his driver were shot dead at a checkpoint, his nephew said.

And at least two female protesters who have attended demonstrations are said to have been killed.

Of more than 80 women working at the airport before Kabul fell to the Taliban on August 15, just 12 have returned to their jobs.

One of them, who gave her name only as Rabia, said: “I need money to support my family.

“I felt tension at home. I felt very bad. Now I feel better.

“My dream is to be the richest girl in Afghanistan, and I feel I am always the luckiest. I will do what I love until I am not lucky any more.”

Six of the women airport workers were standing at the main entrance on Saturday, chatting and laughing while waiting to scan and search female passengers taking a domestic flight.

“I was very afraid,” said the mother of five, who is also her family’s sole provider. “My family was scared for me but I am happy now, relaxed, no problems so far.”

Others are still trying to flee the country.A former interpreter who was tortured by the Taliban while working for the British Armed Forces has called on UK authorities to help save his family trapped in the country.

Mohamad, whose second name has been omitted for his family’s security, fears for the safety of his mother, wife and siblings who are now in hiding.

His father was killed by the Taliban three years ago, and he has not seen his family in person since December 2019 due to the threat to his life and the coronavirus pandemic.

Mohamad said the Taliban captured him in 2014, holding him for over six weeks, beating him and threatening to kill him because he was working with the British. He said: “The Taliban cut my left ear and sent a video to my mum and dad.

“I received an email from the evacuation team in Kabul that your wife should come to airport.

“When my family arrived there was a massive crowd of people outside the Baron Hotel.

“She waited six days outside the hotel, but unfortunately she could not make it to get inside the airport.”

Meanwhile, boys and girls will not be allowed to study together, said the Taliban’s higher education minister Abdul Baqi Haqqani.

He added: “All efforts will be made to find and provide women teachers for female students.”